(RNS) Most people have heard of Hanukkah and Passover and maybe Yom Kippur — the Jewish Day of Atonement. But Tisha B’Av?

Translated as the ninth day of the Hebrew month of Av, it counts as one of the most important days on the Jewish calendar. But even many Jews have not heard of this period of mourning, which requires a 25-hour fast to commemorate the destruction of the First and Second Temples in Jerusalem.

Tisha B’Av, many rabbis say, can be a tough sell, in part because a radical group of far-right Jews wants to rebuild the temple on the site of what is now the Al-Aqsa Mosque, one of Islam’s most revered sites.

But American rabbis are trying to revive interest in the holiday with new rituals that emphasize introspection and reflection, ideas to which modern, nontraditional Jews can better relate.

Tisha B’Av “is definitely challenging,” said Rabbi Steve Segar of Kol HaLev, a Cleveland synagogue affiliated with the Reconstructionist branch of Judaism. First of all, he noted, it falls in the summer.

“It’s a time for vacations,” said Segar. “It’s a time to relax. It’s a time when a lot of people try to lessen their sense of worry — and here’s this day on the Jewish calendar that embeds all the most negative aspects of the human experience. It’s the last thing people want to think about.”

On Tisha B’Av, which begins Monday (July 15), at sundown, observant Jews will begin their fast, read from the Book of Lamentations, and refrain from bathing and sex.

They will contemplate, among other events which fell on the ninth of Av: the destruction of the temple — the center of Judaism in ancient times — by the Babylonians in 586 B.C.E. and again by the Romans in 70 C.E.; the expulsion of the Jews from England in 1290 and from Spain in 1492; the finalization of Nazi orders to exterminate the Jews in 1941 and the mass deportation of Jews from the Warsaw Ghetto to a concentration camp in 1942.

Now imagine the challenge facing Rabbi Dave Levy, head of United Synagogue Youth, who will be in Los Angeles this Tisha B’Av with more than 100 Jewish teenagers from around the country. As he put it, “they go to Disneyland, Universal Studios, the Santa Monica Pier; they tour L.A., they have a great time and here we have to fit in this somber commemoration.”

After some brainstorming, Levy and his staff decided to focus on one of the prime lessons taught on Tisha B’Av — that the Second Temple was destroyed in 70 C.E. because of “baseless hatred” of Jews for other Jews.

Levy plans to take the teens to Los Angeles-area synagogues Monday night for prayers. The following day, they will head to the Museum of Tolerance, an arm of the Simon Wiesenthal Center. There they will hear from a reformed skinhead who once participated in a violent attack on a homeless, gay teenager, and the teenager himself, who has since befriended his attacker. Together they tell a story of anger and redemption.

“The Museum of Tolerance offered us a great opportunity to teach a really powerful, contemporary lesson about baseless hatred and how we can combat it,” Levy said.

On the East Coast, Congregation Beth Elohim in Brooklyn, N.Y., will take a similar approach, starting with traditional Tisha B’Av services Monday night, and adding an original observance the next day.

At sundown Tuesday, Beth Elohim congregants will break their fast with two groups of visitors — Russian Jews from Brooklyn, and members of the nearby Turkish Cultural Center, who are fasting during the day in celebration of the Muslim holy month of Ramadan. In keeping with the dietary laws of Judaism and Islam, the food to break the fast will be kosher for the Jews and halal for the Muslims.

Rabbi Marc Katz of Beth Elohim said it’s important to focus on the calamities of Tisha B’Av. But then you have to move on.

“In a way this is healthy, because it allows us to spend a great deal of energy in a contained time reflecting on these struggles so they don’t weigh us down as we’re living the fullest Jewish lives we can throughout the year,” he said.

It’s the same message camp director Jerry Kaye is trying to impart to hundreds of campers at the Olin-Sang-Ruby Union Institute, a Reform Jewish summer camp in Oconomowoc, Wis.

For the past few summers, he said, the staff on Tisha B’Av has gathered damaged prayer books from area congregations and repaired them with the children. Those too damaged for repair are placed by campers in a geniza, a repository for sacred texts, which will eventually be buried underground.

“Throughout Jewish history these objects were thrown into fire by our enemies and people who hated us,” Kaye said. “We want the kids to understand that these are objects that we respond to with care and concern and love.”

Elsewhere around the country, clergy and other religious leaders will be experimenting with their own rituals on Tisha B’Av. Segar, the Reconstructionist rabbi from Cleveland, will intersperse passages from the Book of Lamentations with references to modern-day tragedies, perhaps the civil war in Syria and the deadly collapse in April of a Bangladeshi clothing factory, he said.

At Camp Coleman, a Reform Jewish summer camp in Cleveland, Ga., officials from the Consulate-General of Japan will join campers as they honor a Japanese citizen who saved Jews during World War II. The children will see, said camp director Bobby Harris, “that amidst all this sadness there are glimmers of hope.”

These new approaches to appreciating Tisha B’Av contrast, however, to a small but long-standing movement among some right-wing Jews who believe that one sign of the messiah will be the reconstruction of the destroyed temple on Jerusalem’s Temple Mount — the holiest site in Judaism.

The idea of reconstructing the temple rankles many Muslims and Jews who see it as a threat to the Al-Aqsa Mosque, and the fragile peace between the religious groups.

Rabbi Marc Fitzerman of Congregation B’nai Emunah in Tulsa, Okla., is among mainstream American Jews who view the destroyed temple as a call for introspection, not a call to rebuild. He says new ways of understanding the holiday speak to people.

“Tisha B’Av is undergoing a quiet transformation, where the image of the destroyed Temple becomes the point of departure for meditations on personal brokenness and ruin,” he said.

“In this shift, the national narrative now plays out on the level of the individual, with a powerful psychological emphasis … that’s a very promising trend, and a way into the tradition for people who may now be standing on the outside.” 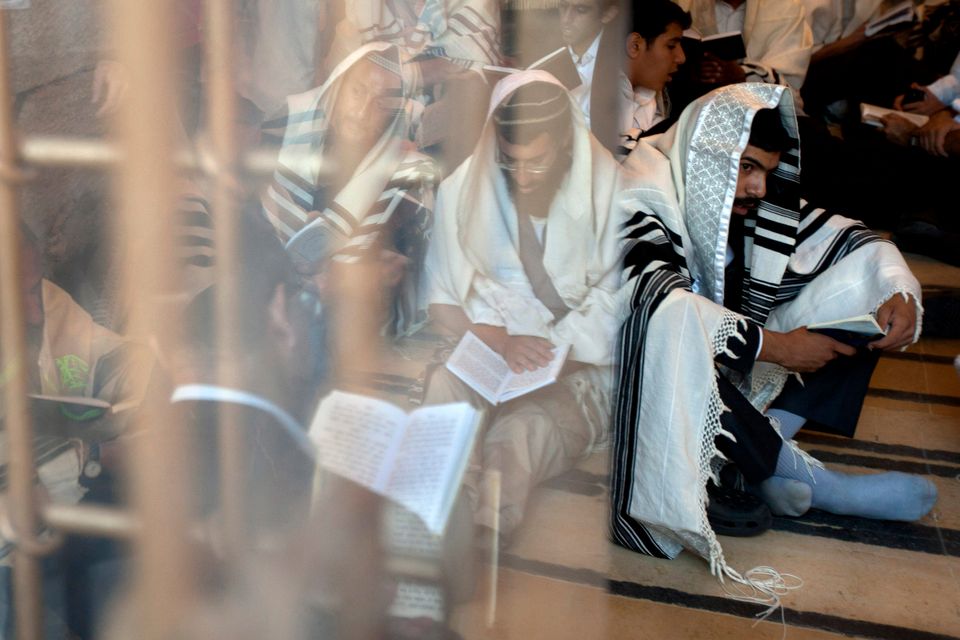 1 / 8
Ultra-Orthodox Jewish men pray as they gather for the mourning ritual of Tisha B'Av at the Western Wall, the holiest site where Jews can pray in Jerusalem's old city, Tuesday, July 16, 2013. The Jewish holy day of Tisha B'Av, when Jews mourn the destruction of the biblical temples is marked Tuesday. (AP Photo/Sebastian Scheiner)
AP 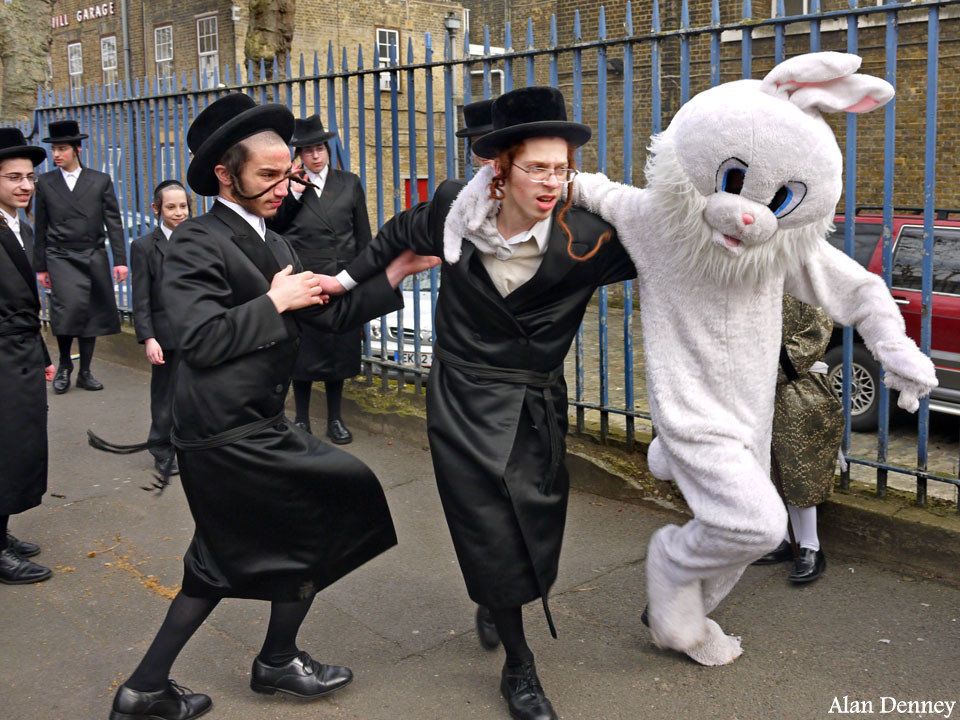