Ever since RMS Titanic sank on that fateful day in 1912, scientists have been struggling to explain the "perfect storm of circumstances that conspired to doom" the luxury liner.

Previous studies suggested that Titanic was done in by a confluence of extreme environmental conditions, but new research conducted at the University of Sheffield in England suggests that 1912 may not have been such an exceptional year after all. In fact, the researchers behind the new study think the threat icebergs pose to oceangoing ships is greater today than it was back in the day.

"While 1912 was a year with a significant number of icebergs, the number wasn't outside previous records," Professor Grant Bigg, a senior lecturer in earth systems science at the university, told The Huffington Post in an email. "This is in contrast to previous views, which have suggested the iceberg risk was exceptional that year." 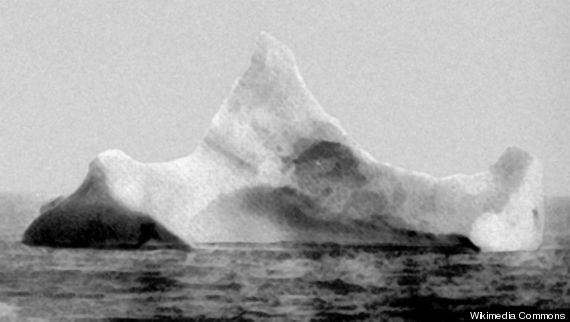 The iceberg believed to have sunk the RMS Titanic.

Bigg and a colleague examined variations in iceberg numbers in the Atlantic Ocean over the 20th Century, paying special attention to bergs that passed south of a line in the ocean drawn at 48° N latitude.

In 1912, the researchers found, 1,038 icebergs crossed that line. While that number is above average for a 12-month period, even greater numbers of icebergs were observed crossing the line during other 12-month periods. 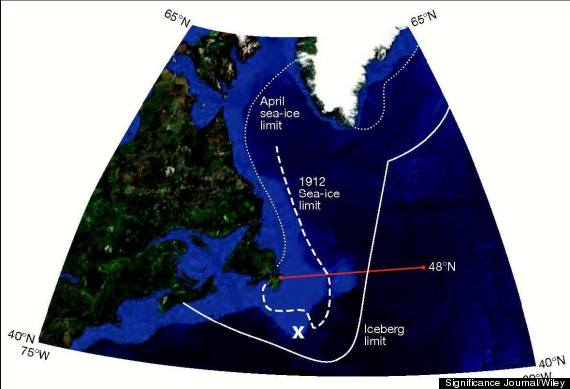 Average sea-ice limit for April 1979-2013 (dotted), a typical Newfoundland maximum sea-ice limit for the early twentieth century (dashed and denoted as 1912), and the maximum iceberg limit for 1900-2000 are shown, in addition to the 48°N line. The location of the Titanic collision is shown by an "X".

The researchers also looked to see if unusual weather conditions played a role in Titanic's sinking. Again, while weather was a bit out of the norm in 1912, other years saw more extreme conditions.

"The weather conditions in the days around the collision favored movement of ice and icebergs further south than normal, but again not to unprecedented latitudes," Bigg said in the email. "The speed of the ship in what were known to be icy conditions must have played a role. The crew and captain have been blamed for this in the past."

In taking a closer look at the trajectories of icebergs in 1912, Bing and his colleague noticed one iceberg that stood out: one that calved from a glacier in southwest Greenland in 1911 and passed closest to the site at which Titanic went down. According to the trajectory model, this iceberg was likely about 500 meters long when it calved and then shrank over the next few months to a length of around 125 meters. That's the reported size of the iceberg that hit the Titanic.

Aside from reshaping long-held theories about the Titanic tragedy, the new findings -- described in a paper published online in July 2014 edition of the journal Significance -- may hold an important warning for seagoing vessels today.

“As use of the Arctic, in particular, increases in the future, with declining summer sea ice the ice hazard will increase in waters not previously used for shipping," the researchers conclude in the paper. "As polar ice sheets are increasingly losing mass as well, iceberg discharge is increasing... and increasing global warming will likely cause this trend to continue."