As the 100th anniversary of the sinking of the RMS Titanic approaches, National Geographic has released incredible views of the "unsinkable" ship sitting on the seabed.

On April 10, 1912, the Titanic launched her maiden voyage to New York from Southampton, England. On April 14, the ship collided with an iceberg and sank in the early hours of the following morning. According to the Smithsonian Institution, the Titanic's final resting place is 12,500 feet deep.

See the stunning, never-before-seen images from the April 2012 edition of National Geographic magazine in the slideshow below. From Hampton Sides' report:

The wreck sleeps in darkness, a puzzlement of corroded steel strewn across a thousand acres of the North Atlantic seabed. Fungi feed on it. Weird colorless life-forms, unfazed by the crushing pressure, prowl its jagged ramparts. From time to time, beginning with the discovery of the wreck in 1985 by Explorer-in-Residence Robert Ballard and Jean-Louis Michel, a robot or a manned submersible has swept over Titanic’s gloomy facets, pinged a sonar beam in its direction, taken some images—and left.

In recent years explorers like James Cameron and Paul-Henry Nargeolet have brought back increasingly vivid pictures of the wreck. Yet we’ve mainly glimpsed the site as though through a keyhole, our view limited by the dreck suspended in the water and the ambit of a submersible’s lights. Never have we been able to grasp the relationships between all the disparate pieces of wreckage. Never have we taken the full measure of what’s down there.

Until now. In a tricked-out trailer on a back lot of the Woods Hole Oceanographic Institution (WHOI), William Lange stands over a blown-up sonar survey map of the Titanic site—a meticulously stitched-together mosaic that has taken months to construct. At first look the ghostly image resembles the surface of the moon, with innumerable striations in the seabed, as well as craters caused by boulders dropped over millennia from melting icebergs.

On closer inspection, though, the site appears to be littered with man-made detritus—a Jackson Pollock-like scattering of lines and spheres, scraps and shards. Lange turns to his computer and points to a portion of the map that has been brought to life by layering optical data onto the sonar image. He zooms in, and in, and in again. Now we can see the Titanic’s bow in gritty clarity, a gaping black hole where its forward funnel once sprouted, an ejected hatch cover resting in the mud a few hundred feet to the north. The image is rich in detail: In one frame we can even make out a white crab clawing at a railing.

Here, in the sweep of a computer mouse, is the entire wreck of the Titanic—every bollard, every davit, every boiler. What was once a largely indecipherable mess has become a high-resolution crash scene photograph, with clear patterns emerging from the murk. “Now we know where everything is,” Lange says. “After a hundred years, the lights are finally on.”

Below, see the images visible for the first time through sonar imaging. Click here to read the full report on National Geographic.

PHOTO GALLERY
Titanic Under The Sea 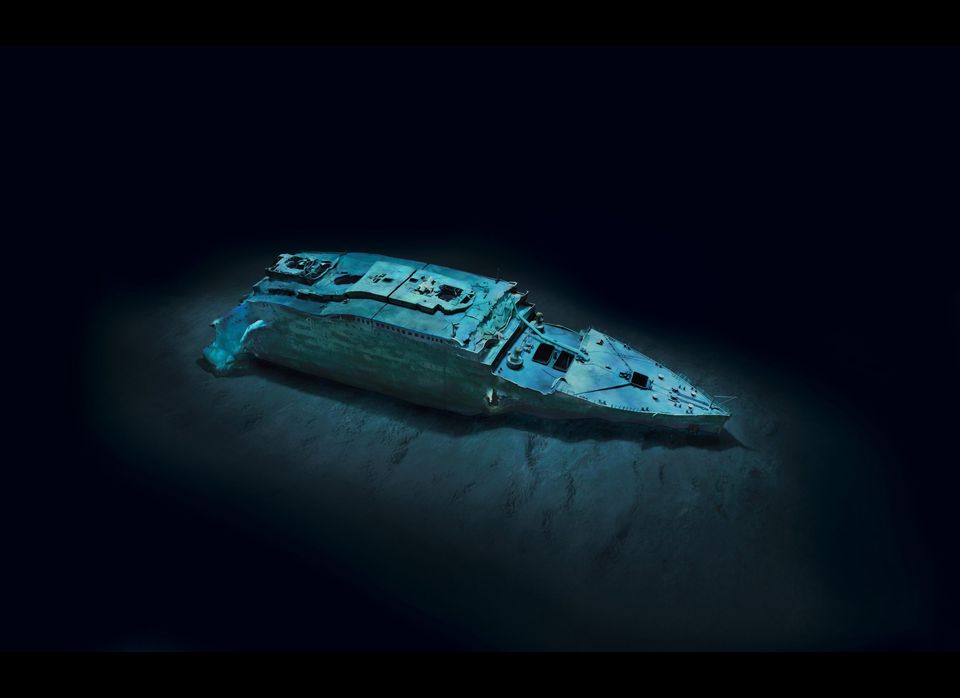