After the RMS Titanic struck an iceberg and began to sink into the freezing North Atlantic on April 15, 1912, doomed band members on the ship's deck are rumored to have played "Nearer, My God, to Thee" until their last moments. As Fox News' Steve Turner points out, the group was led by the ship's bandmaster, Wallace Hartley, and his belief in music's ability to calm people and maintain order. More than 100 years after Titanic's tragic sinking, a violin thought to have belonged to Hartley has been confirmed as real.

A CT scan performed at The Ridgeway Hospital in Swindon, Wiltshire, England, has proven the Titanic violin's authenticity "beyond a reasonable doubt," Andrew Aldridge from auction house Henry Aldridge and Son told the BBC.

According to the Associated Press, the violin's owner originally approached the auction house in 2006 to authenticate and potentially sell the instrument. After seven years of preliminary tests, Henry Aldridge and Son needed one last piece of evidence: analysis of the violin's internals.

"A 3D image of the violin was created from the CT scan, meaning the violin could be examined from the inside," Astrid Little, imaging manager at the hospital, said in a release. "The scan revealed that the original wood was cracked and showed signs of possible restoration. The fine detail of the scan meant the auctioneers could examine the construction, interior and the glue holding the instrument together."

The CT scan's findings revealed deterioration consistent with that which an authentic violin from the Titanic would have experienced, Aldridge explained. "The violin was in a heavy-duty leather Gladstone-type bag, so the violin would have come into contact with water, but it would have been protected by the leather," he said. "The instrument is also held together with animal glue, which melts when it is hot, not when it is cold."

Other items found along with the violin also suggest Titanic origins, including an engraved silver plate on the instrument that has been dated to a style popular in 1910. According to an ABC report, the engraving reads: "For Wallace on the occasion of our engagement from Maria." Bandmaster Hartley is believed to have received the violin as a gift from his then-fiancée, Maria Robinson, at the time of their engagement in 1910.

After Hartley's death on the Titanic, his body was recovered floating at sea. As the AP notes, reports differ as to whether the violin was strapped to his corpse or if it had been lost in the water. In any case, the violin was not in the record of items found with him.

Per the media release, however, a diary entry from Hartley's fiancée includes information about the instrument being returned to her. After her death in 1939, a Salvation Army worker passed the violin on to the current owner's mother, according to the hospital. It remained in the mother's attic until it was rediscovered in 2006.

The violin is expected to be auctioned off by Aldridge and Son, a house known for handling Titanic relics. Though the company hesitates to estimate the worth of the instrument, CBS reports that it could potentially sell for millions. 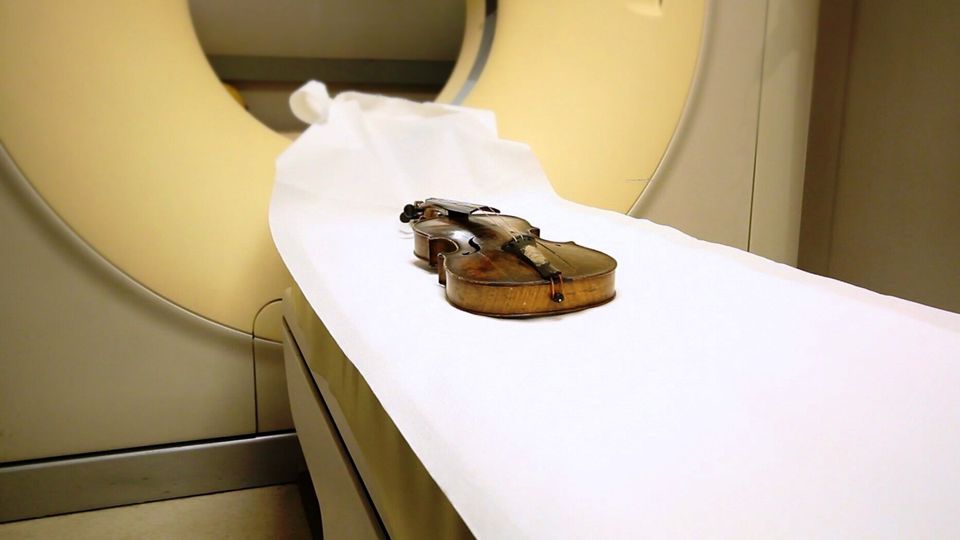