Special Report and part of the series based on the report "It's All Interconnected".

(Filed as Comments in the Net Neutrality/Open Internet Order Proceeding)

"Title Shopping is the use of different regulatory classifications for the same product or service in different local, state and federal regulatory or legal proceedings. It is designed to maximize the 'regulatory' benefits that would not be available if only one classification was applied."

At the FCC and in the courts, Verizon has claimed over and over again that the company and America will be harmed if the FCC 'reclassifies' broadband as a 'Title II" service using "telephone era utility regulation." Verizon even sued the FCC to block the Open Internet Order, commonly referred to as "Net Neutrality." Yet, in almost every state law and in every Verizon local and state-based cable franchise, Verizon's FiOS uses a FTTP, Fiber-to-the-Premises, network which is classified as a "Title II," telecommunications, common carriage service.

After going through thousands of pages of Verizon's statements, filings at the FCC, and court documents, even listening to the oral arguments made by their lawyers, we can not find one place where Verizon told the regulators or the courts that Verizon's entire wireline FiOS deployment in every state is based on Title II.

Was Verizon required to make this essential fact known to the court or to the FCC?

Compare these two statements, both by Verizon, pertaining to the use of 'Title II'.

"Pursuant to the NJSA 45:5A-15, telecommunication service providers currently authorized to provide service in New Jersey do not require approval to upgrade their facilities for the provision of cable television service.

"As such any construction being performed in the public rights of way is being undertaken pursuant to Verizon NJ authority as a telecommunication service provider."

"Rotary Telephone-Era Utility Regulation Is Not the Answer. In contrast to an approach that encourages innovation and investment in all parts of the Internet ecosystem, some now propose that the Commission "reclassify" Internet access service and apply 1930's utility regulation to these services. Similarly, others, including Mozilla, would conjure up new "transport" services out of Internet access services and subject this newly discovered "service" to Title II utility-style regulation, thus having the same effect. Any such approach is unnecessary to protect the openness of the Internet and would be harmful and counterproductive to the Commission's goals.

"In the case of broadband Internet services, in contrast, policymakers' longstanding approach has relied - with stunning success - on flexibility and competition to spur innovation and investment, rather than a central-planning model of utility regulation with the opposite effects. This fundamental difference has informed how broadband Internet providers have developed their networks, services, and basic business models and has prompted hundreds of billions of dollars of investment in wireline and wireless broadband infrastructure...

"Any proposal now to reclassify broadband Internet access or some new "transport" component of Internet access as subject to utility regulation would therefore undermine innovation, destabilize current investments and cast a cloud of regulatory uncertainty that would deter these heavy and much needed investments. The Commission itself foresaw these risks nearly a decade ago when it argued before the Supreme Court that common carriage regulation likely would "discourage investment in facilities" and spur broadband providers to "raise their prices and postpone or forego plans to deploy new broadband infrastructure."

We won't dwell on how we ended up with this 'Battle of the Titles', but it is clear that exposing the implications of Title Shopping could change the direction of communications policy in the US.

But this is much more damaging and pervasive as all of Verizon's affiliate companies are taking advantage of "Title Shopping."

Unfortunately, no regulator at any level of government has noticed or taken any affirmative actions to stop this practice, but there are serious legal issues to all of this -- and many harmful consequences. For example, if Verizon claims the FTTP upgrades are for FIOS and are Title I, they would have serious legal problems as it is not legal to cross-subsidize local rates with an information or cable service in New York State. Or if the networks are really 'Title II," then Verizon has gamed the FCC and the courts' decision making process on almost every aspect of communications, from Net Neutrality, or blocking competitors, to allowing Verizon to charge customers for Title II networks.

We Ask the FCC and the States to Investigate and Take the Next Steps.

We can not find any instance where Verizon disclosed to the FCC or to the courts or to the public that the company's primary fiber optic services are now classified as Title II today and have been since before the Verizon's challenge of the Open Internet Order.

And we note that throughout Verizon's comments and reply comments in the Internet Order proceedings, Verizon never mentioned the words "cable service" or "utility," even though FiOS TV has 'cable' franchises, but is classified as a 'telecommunications' service, while the overwhelming infrastructure of Verizon is part of the PSTN, the Public Switched Telephone Networks, that are the state-based communications utilities.

Therefore, we ask the FCC to start an investigation into whether Verizon's networks are already classified as Title II and whether Verizon has misled the FCC, and even the courts, in failing to reveal and supply basic, essential facts, as these facts have implications on every aspect of the FCC's decision making process, from the IP transition and Verizon's filings to use Section 251 to shut off the copper, or to the Open Internet Order, or even peering and interconnection issues with Netflix or the 'special access' costs to competitors.

Net Neutrality is Solved. If the networks are already classified as Title II (and Verizon has, in fact, separated the "FiOS" cable, Internet and broadband services) then there is no need for any reclassification.

Our Position Is Simple: Verizon's affiliates have taken control of critical infrastructure and have caused a bottleneck to and from the Internet. This has also allowed the affiliate companies to dismantle the PSTN, state-based utilities, and privatize publicly-funded assets or allowed whole areas of the state-based infrastructure, especially suburban and rural areas, as well as 'low income' areas, to deteriorate because the companies diverted funds to other lines of business, many times overseas, instead of doing the upgrades that customers actually paid for via rate increases and state alternative regulation plans.

Returning competition by opening the networks and making sure that the affiliates that use the networks pay their fair share, like all other competitors, will not only solve Net Neutrality, but will bring customers lower prices, higher speeds and choice.

And in our other comments in this proceeding we will be presenting ample documentation of the flows of money between and among the utility networks and the affiliate companies, as well as a road-map to fix Net Neutrality and make the US Number 1 in communications -- again.

Next Steps: What the FCC Must Do.

And based on our other comments in the Open Internet Order proceeding:

Investigate Customers as Funders of the Broadband, Fiber Optic Networks.

We request that the FCC do a complete audit, as well as data collection and analysis, by state, to examine how much money was collected from ratepayers via excess phone charges to fund these other activities, including the development and deployment of broadband as well as the creation and implementation of all of the affiliate companies' business activates -- based on Title II classifications.

This Special Report is an extension of "It's All Interconnected" , a report by Public Utility Law Project, written by New Networks, with assistance by David Bergmann. The report supplies an analysis of the flows of money based on Verizon New York using the Title II classification to charge local phone customers for the deployment of FiOS as well as the funding of other affiliate company activates, which also use Title Shopping to get financial and regulatory perks.

The following outlines examples of Title Shopping. We are just scratching the surface.

Just to reinforce how the FCC, the courts and the states have been 'gamed', we found this in the Verizon District of Columbia (DC) franchise application. By 2007, Verizon had franchises in 835 different locations in 12 states, and in the application Verizon again repeats that the DC deployment is a Title II service. 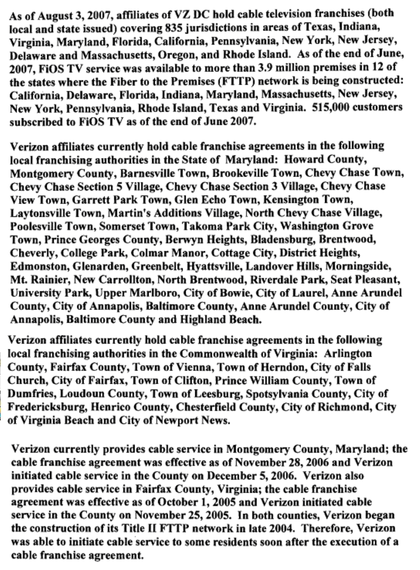