Titus Kaphar doesn't quite turn absences into presences, but rather into something in between. His artwork conjures a space somewhere between here and gone, past and present, traditional and contemporary.

Somewhere between a cold crime scene investigator and a surgeon on the fritz, Kaphar turns history, specifically art history, into his canvas, slashing, erasing, stripping and crumpling away the images documenting history as its widely understood. Through his artistic practice, Kaphar exposes the pent up innards inside the pristine images we're accustomed to seeing, as well as the undocumented presences that loom both above and below. 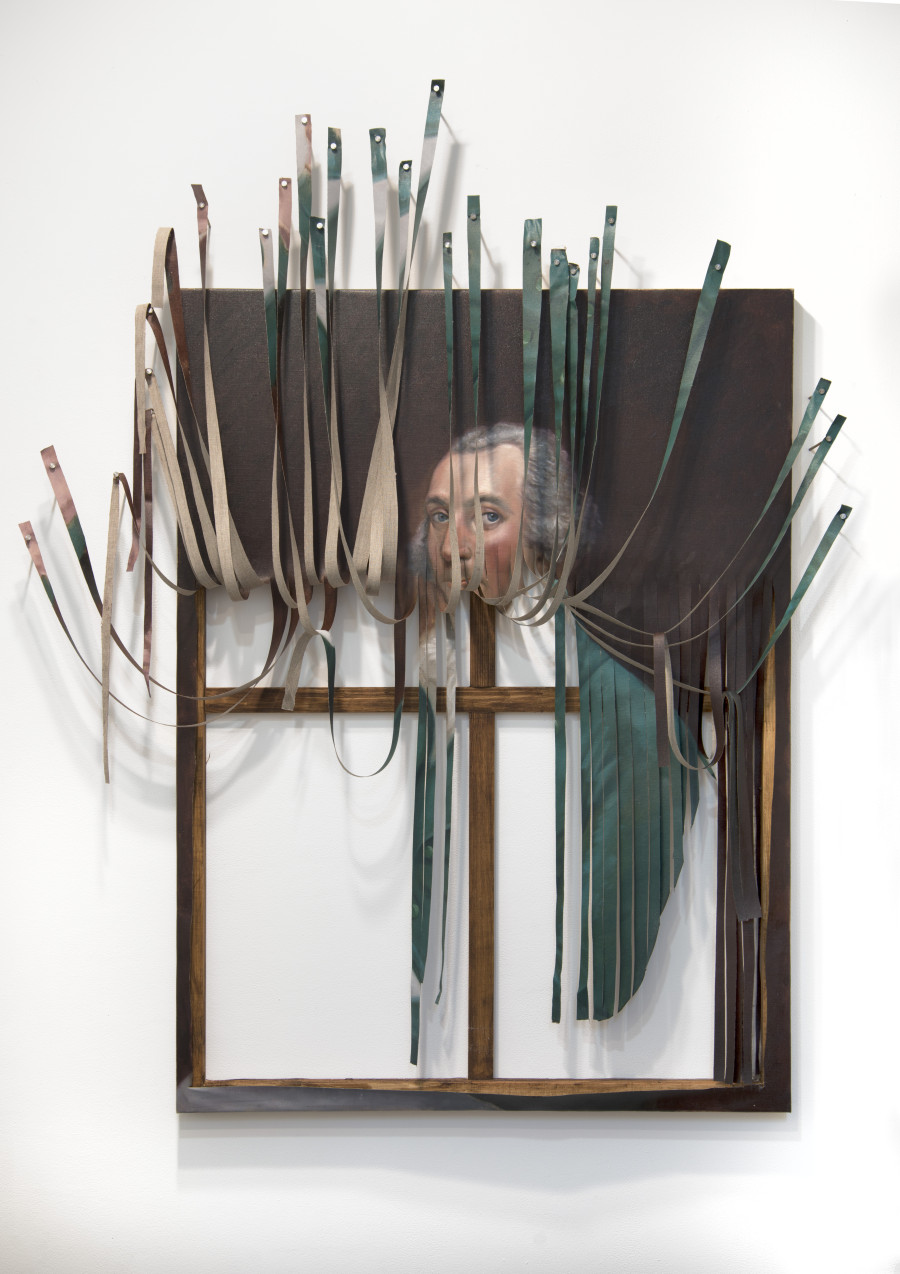 For his current exhibition at Jack Shainman Gallery, Kaphar presents a painting show titled "Drawing the Blinds," along with an extension of his 2011 Jerome Project titled "Asphalt and Chalk." The former maintain's Kaphar's practice of bringing history into the present, and traditional artwork into the contemporary conversation.

Many of the works allude to the historical absence of African Americans and women from the verbal and visual canons. In "Behind the Myth of Benevolence" a portrait of a silver-haired man is peeled back like a fallen drape, revealing behind it a nude depiction of a black woman, gazing at the viewer. In "Stripes," a similarly stuffy portrait of a white man is cut into strips, many of which are nailed to the surrounding wall, exposing the wooden frame beneath. The image is both mischievous and violent, a ghostly hoax and a work of sadism. 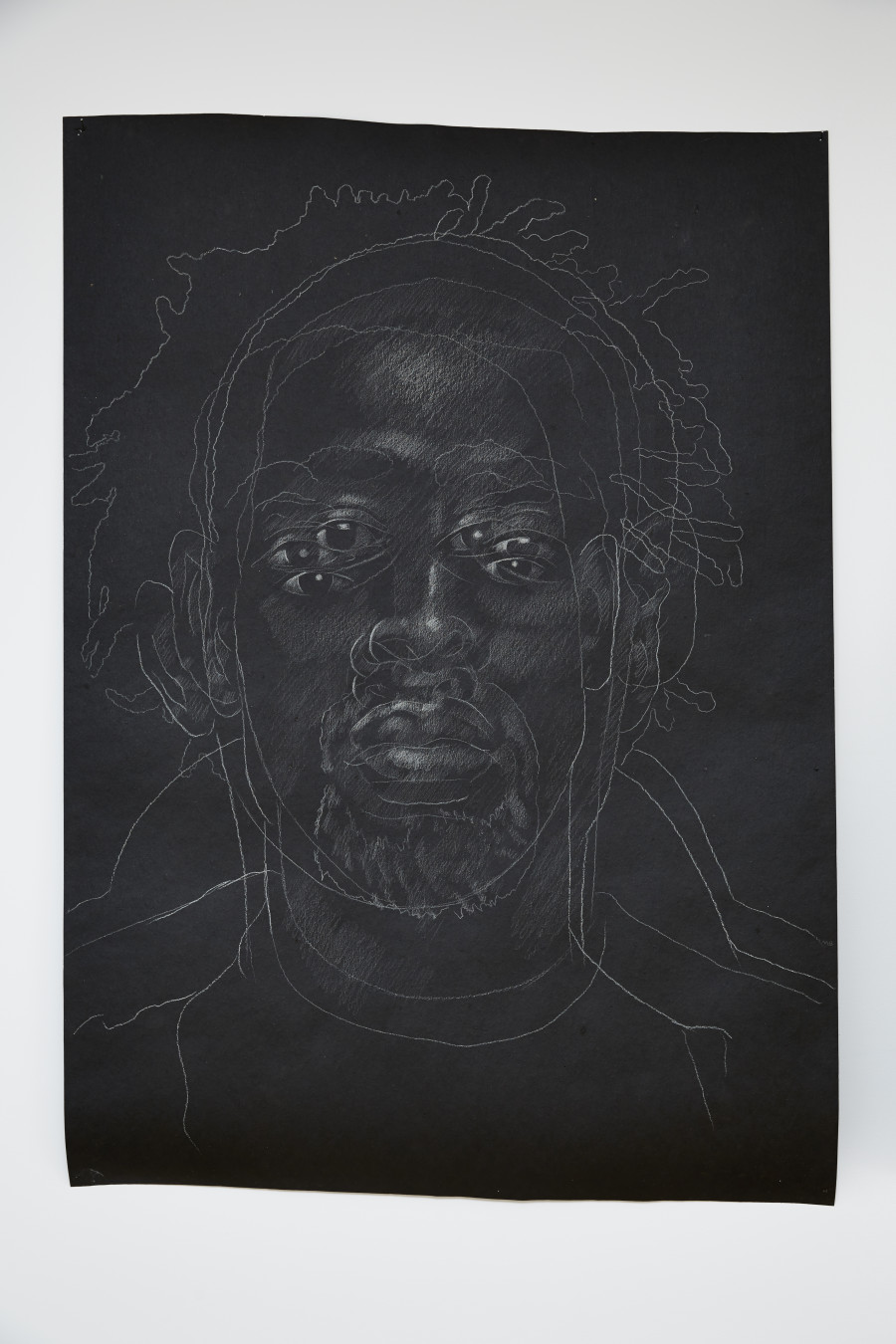 While "Drawing the Blinds" manipulates primarily images made (at least hypothetically) before 1900, "Asphalt and Chalk" takes inspiration from far more recent events. The series is an addition to his 2011 Jerome Project, which began after Kaphar began researching his father's prison records and came across a shocking number of men who shared his name. Reacting to the disproportionate number of black males who are incarcerated, Kaphar created portraits of the many Jeromes, based on their mug shots. He obscured their images by dipping the paintings in tar, thus restoring a portion of the privacy denied them.

In "Asphalt and Chalk," Kaphar draws multiple Jeromes with chalk on asphalt paper, layering their faces until one bleeds into the other and any sense of recognition is obscured. He uses the same technique with images of Michael Brown, Sean Bell, Amadou Diallo, Trayvon Martin as well, their finely rendered faces flowing into each other on the black canvas, reminiscent of a chalk outline of a body on the street.

We reached out to Kaphar to learn more about his current show. 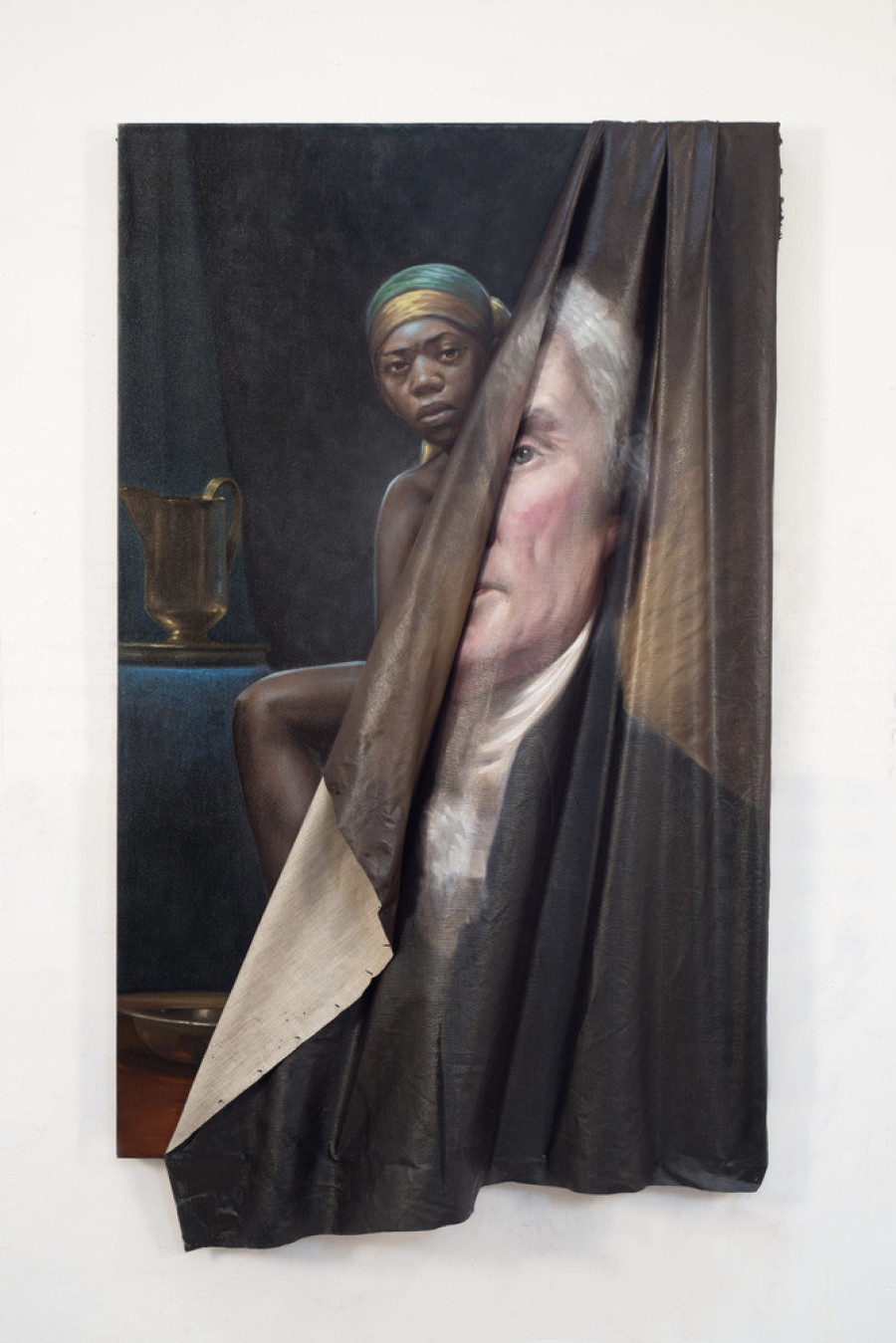 Behind the Myth of Benevolence, 2014 oil on canvas 59 x 34 x 6 inches ©Titus Kaphar. Courtesy of the artist and Jack Shainman Gallery, New York.

You disrupt classical images to introduce alternate histories revealing what's cut out of the dominant narrative. Are the subjects in your works historical individuals? Imagined persons? Who are these figures?

Very little of my work directly draws from the art historical period known as “Classical.” I think more accurately stated, I draw from all time periods in the canon of art history, with an emphasis on American and European traditions from 1700 - 1900 for my image references and 1900 - contemporary for my interventional gestures. From painting to painting, who the characters are varies. Sometimes they are used as I find them within the compositions of their original paintings. If I need something specific -- an expression, or a gesture -- from the character that I don’t see in the original, I’ll invent or re-stage the painting. At this point, many of the paintings, though they rely on the visual tropes of history, are in fact invented in order to have more control of the narrative.

Can you talk about your use of white paint in the exhibition?

In the Asphalt and Chalk exhibition, there are many paintings that utilize what I’ve been referring to as the “whitewashing” technique. The whitewashed pieces in that exhibition were studies for the Time Magazine/Ferguson Project. The whitewashing functions as a kind of erasure. I wanted to make something that didn’t feel like an illustration of an idea but an expression of a feeling. The feeling that even after the ink dries from the printing of the magazine, I know that many will feel permission to forget about Ferguson and it’s surrounding issues. The very nature of our media cycle erases the gravity and the impact of a situation as it becomes just another short lived flash across our screens. 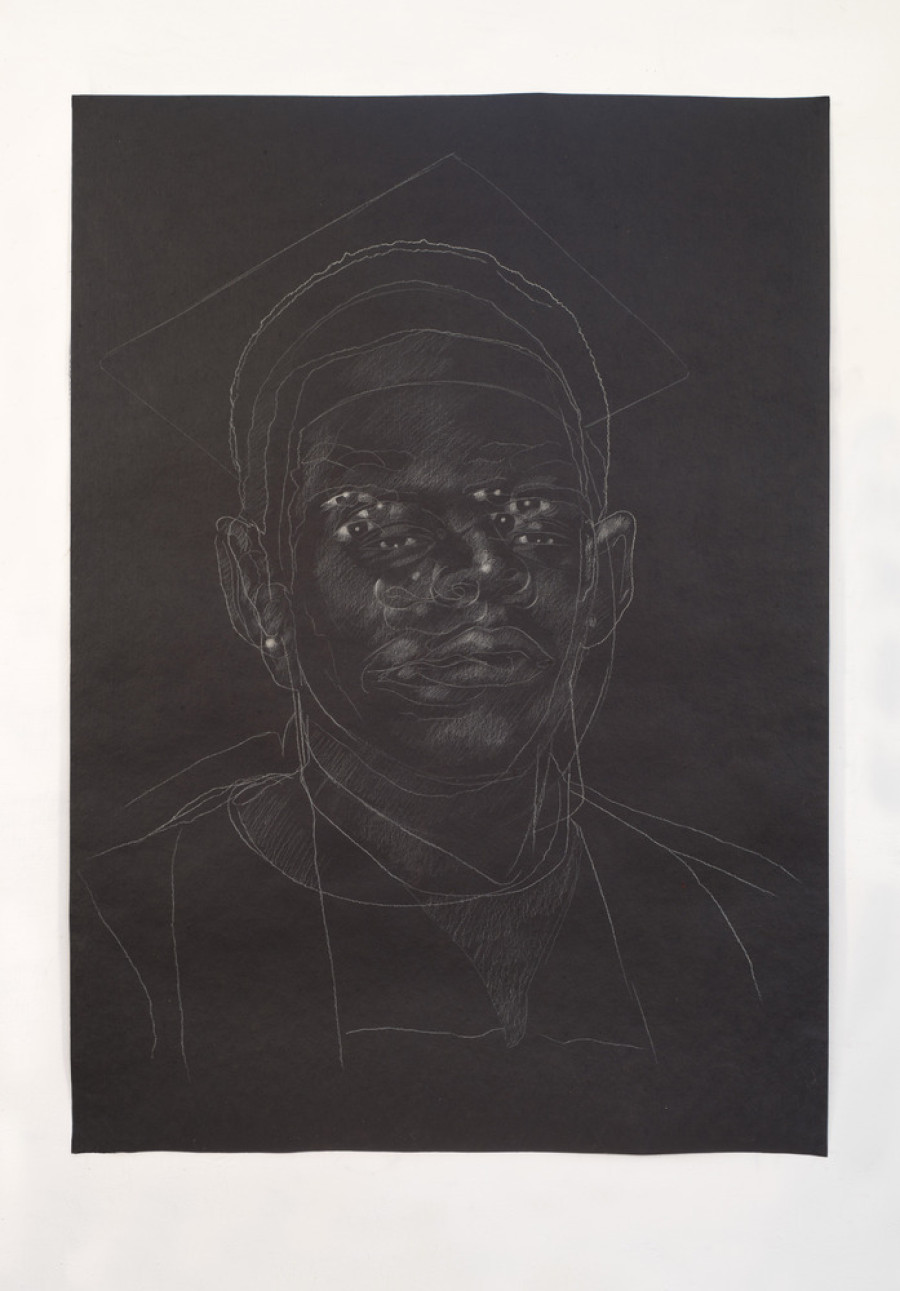 You began the Jerome Project in 2011. Did you feel at the time the piece was not 'over'? Do you ever see yourself completing the work?

Although it may sound like hyperbole, because of the personal nature of the Jerome Project, I’ve been dealing with this body of work for most of my life. The more I understand the criminal justice related issues that the Jerome Project highlights, the more I believe pessimistically that these are issues that our country will be addressing for some time. I don’t know what my
response will be to it in the future, but I plan to continue the investigation.

What is being communicated through your composite chalk portraits and how is the effect different than your previous tar dipped portraits? Do they depict different occurrences?

In the composite chalk portraits I’m exploring the inability to distinguish one individual from another. In all but one piece the individuals in the drawings share the same name. As you look at the drawings, your eyes struggle to reconcile the multiple faces into one. In these pieces, I’m thinking about mistaken identities, similar life struggles, and fitting the description. 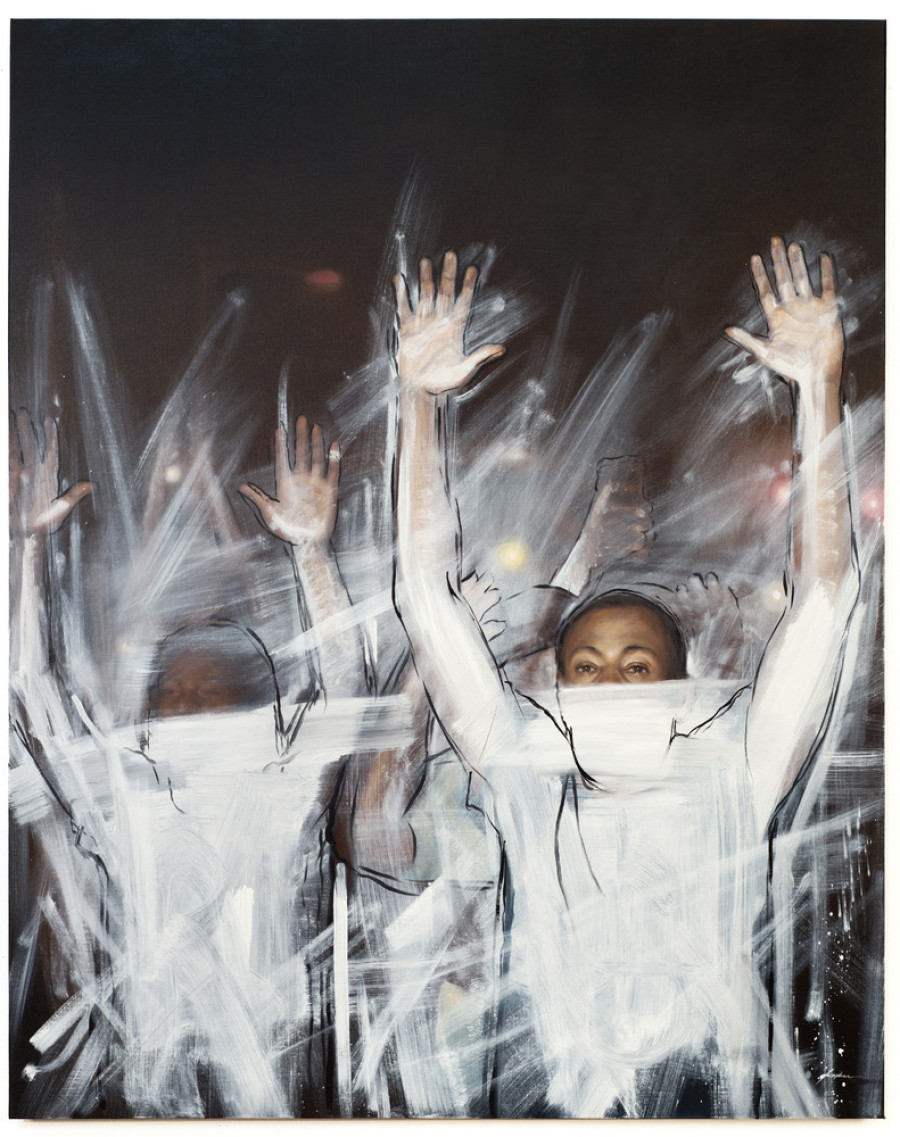 Yet Another Fight for Remembrance, 2014 oil on canvas 60 x 48 inches ©Titus Kaphar. Courtesy of the artist and Jack Shainman Gallery, New York

When did you begin working on the work for this show? How did current events play into the process, if at all?

To some degree, all of my work is affected by current events, even the pieces that speak directly to historical moments. I think history is kind of like a sometimes visible, sometimes invisible armature on which the present is constructed. All history becomes interesting when we can see how the past affects our present. There’s a piece in the 24th street space that speaks to this. The Black Power movement of the 1960s was symbolized by a closed black fist. I’m struck by how the current movement of resistance is symbolized by two raised, open hands. In the painting 1968/2014 the simple act of placing these contrasting gestures side by side reminds me that history doesn’t remain in the past.

You've said in the past "When I'm working on a portrait of someone, there is often an internal monologue, a narrative I hear." Was that the case for this exhibition? What was this presence, if so?

It’s a difficult thing to put into words without sounding like I’m talking about something supernatural. But after speaking with many fiction writers about the topic, I now realize it’s quite common to feel that your characters are dictating the story and that you are a scribe. I think this is the clearest way to describe the monologue I have in my head.