July 10th is the bookworm’s Day of Atonement: a holy time that honors the birth of Marcel Proust, gathering avid readers to bemoan the sins -- mostly sloth -- that have prevented them from finishing his seven-volume masterpiece In Search of Lost Time (À la recherche du temps perdu in the original French). It numbers >4,000 pages. It redefined the novel. It ruminates beautifully on memory and time and art and love. It holds the secret to immortality. Or so people say.

After all, the average acolyte has only read a passage or two, probably the one about madeleines. Your best-read friends -- even your professors! -- will eventually confess they never made it past the first volume. Pulling up the Wikipedia page offers little respite. Its synopsis is thousands of words long and contains a litany of untrackable French names.

When summaries are overwhelming, you know you’re in trouble.

That’s where TL;DR Proust edition comes in! We’ve got it all: the big plot arcs, the sacred moments, the favorite passages, the steamy details. So skip the day of guilt, dissolve a cookie in some tea, and indulge in our summary of the summary.*

The Plot: Narrator recalls childhood with wonder. Worries, as he ages and experiences humanity’s folly, that time is always being lost and the world has no meaning. Realizes, at the end, that memory lets him re-access all that was lost. Writing also does this, so he writes the book you’ve been reading.

Who: Narrator is unnamed. Until he's called Marcel in volume 5. Life VERY similar to author’s. Hmm.

Opening: “For a long time I would go to bed early … ” Adult narrator reminisces about childhood, dreams and interior working of the mind in Combray. Has mommy issues.

Madeleine Scene: Dipping a madeleine in tea reminds narrator of that childhood. Taste and smell activate involuntary memory versus consciously recalling something. Applicable to most of your childhood foods. Weirdly accurate insight into human psychology.

Disillusionment: Narrator social climbs aggressively as he ages. Realizes Parisian elites are not all they’re cracked up to be; corrupt, vane, soulless.

Love: Narrator flits and flirts his way through those social circles. The big two are Gilberte and Albertine. First Gilberte, then Albertine, then no one, then Albertine again. Then he imprisons her, so she runs away and dies. Back to Gilberte. Till she marries someone else.

Immortality: Narrator realizes, in final volume, at a particularly bad party, that language will let him escape time!! He can stand back as an impartial observer of the world and relive his memories. Decides to become a writer and races, before he dies, to record his life, i.e. the giant novel you’ve just finished reading.

Literary Significance: Proust abandons “realist novel” conventions of Jane Austen & co. Still obsessed over social drama, but more interested in what goes on within the human mind -- what Virginia Woolf & co. will build on in modernist literature.

TL;DR This Summary: ﻿﻿﻿Time once was lost. Then it was found! Amazing Literature.

*All that said, In Search of Lost Time does function as the perfect digital/21st-century detox. There’s no better way to suspend our obsessions with efficiency and bite-sized, consumable media. It’s complex, nuanced, long, slow, and stunning -- which makes it, in a sense, the antidote we’ve all been waiting for. If you’re inspired at all by the TL;DR, please do go pick up the first volume. You won’t regret it. Though you will, either ironically or fittingly, lose a lot of time.

PHOTO GALLERY
7 Quotes From Proust's In Search Of Lost Time
Download
Calling all HuffPost superfans!
Sign up for membership to become a founding member and help shape HuffPost's next chapter
Join HuffPost 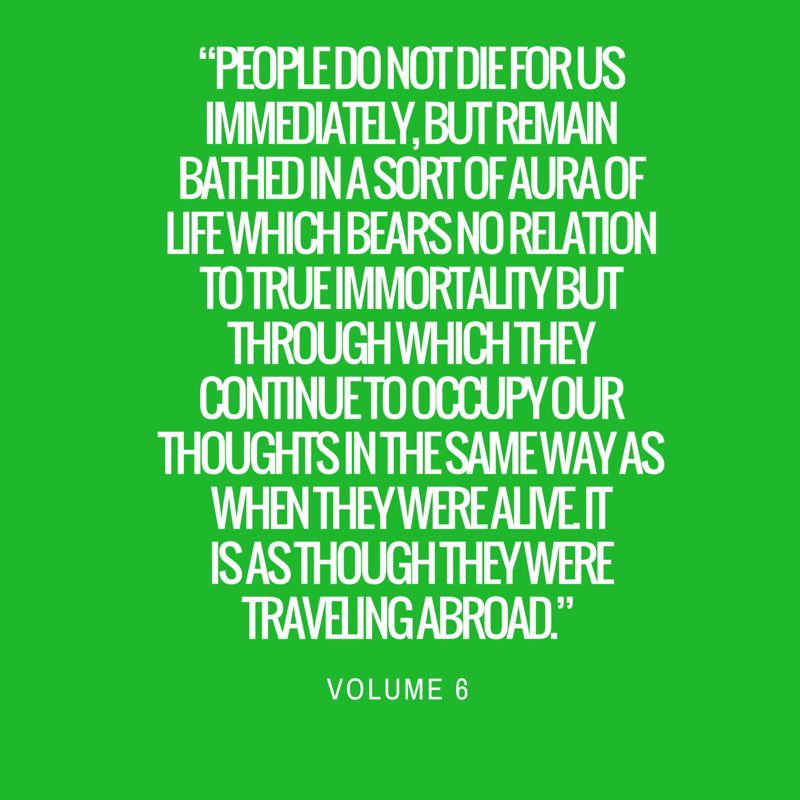