Wait. Is this a joke?

TMZ created a poll to ask readers how it should "refer to black people." We had to do a double take -- and then a triple take -- before finally being convinced that this was real: 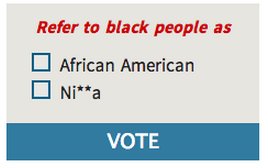 TMZ posed the question in a post about Death Row Records CEO Suge Knight saying that he does not like being called "African American" and that he believes there are certain circumstances when it is acceptable to use the n-word. Reactions to the poll on Twitter were just as we would expect:

@TMZ should be ASHAMED for posting a poll asking if the Black community should be referred to a "African Americans" or "N*ggas" ....wow

Tmz black folk poll, what to refer to blk folks as..1afrcn amercn or 2 the N word ..whats ur vote @tmz

@tmz Really? You have a poll online asking if black people should be called Ni@@a or African American?