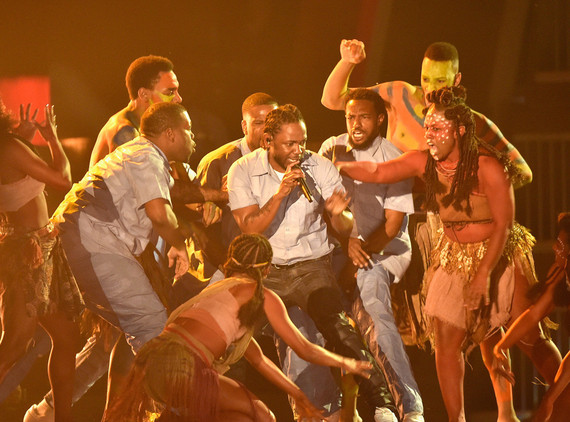 At the 58th annual Grammy Awards, Kendrick Lamar shook the stage with a powerful, compelling performance which rendered him a long, standing ovation. With his album, To Pimp a Butterfly introduced by actor Don Cheadle as a "hip-hop masterpiece", Lamar emerged on the staged, sweating, shackled in chains with other Black men, in what was clearly a prison setting. Performing renditions of "Blacker The Berry" and "Alright", his performance and energetic lyrics were loaded with pro-Black, social justice-centered symbolism and more than timely, racial socio-political themes.

Using African traditional dances, imagery and aestheticism, Lamar's performance was uncut, unafraid and unequivocally unapologetic; and based on the some of the faces in the crowd, maybe a little too much to handle. The conclusion of his stage act was embroidered with the resounding presence of an image of Africa, black and bold, with the word "Compton" -- Lamar's hometown -- stamped in the middle of the continent.

While Lamar's in-depth artistry has rendered him to be, by many, one of the most prolific hip-hop artists of our time, it is his attention to grander, global narratives and how he so eloquently bridges the gap between historical and contemporary issues which makes him stand apart from his peers in the rap game. In this case of connecting such affairs, Lamar's performance, in a Pan-African context, speaks to an ancestral call-to-action for many people of color -- and that is the reclamation and resurgence of African identity.

Although the use of African thematic elements or the multi-faceted is not new to hip-hop or to Lamar's music -- as he cites that TPAB was heavily influenced by his 2014 to South Africa -- his Grammy performance took the African Diasporic tie to a whole another level. During his performance, Lamar transitions from a jailhouse scene, with his chains removed, to an African-infused set with a bonfire roaring in the background; as he, and the other inmates, dance alongside in unison with what is perceived to be his African sistren and brethren.

Lamar's use of profound African imagery is not only an insertion of the cultural and artistic African presence and legacies at a predominantly white and historically racist, music award show, but speaks to the dire need for those within the African Diaspora to unify and to understand the true history of who we are, what we are and where we come from. Unfortunately, for many African-Americans, the pervasiveness of stereotypical rhetoric, the single-story narratives of Africa as poor or war-ridden or Africans as "just slaves" were and are still taught within the American educational system. Rendered from the white supremacist perspective, Black history and even the Black present has been riddled with antagonistic approaches to the continent, which have purposefully disregarded the "cradle of civilization" as a continent of riches in resources that houses multifarious spaces of cultures, languages, inventions, history and the like. 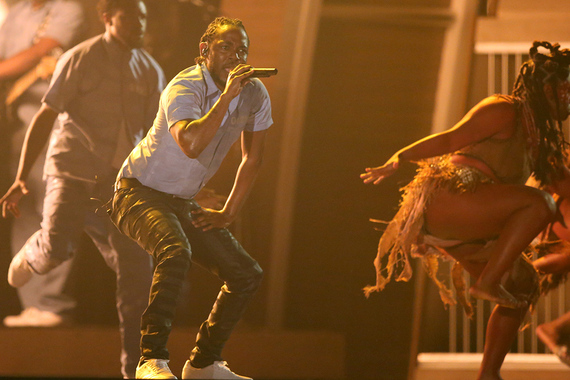 Because of such one-sided historical and educational cultivation, some African-Americans view Africa and Africans in a negative light; while some Africans perceive African-Americans also in an adverse point-of-view. With this unfortunate attitudes and approaches, divisions between African Diasporic counterparts have ensued; leaving some with little room for cross-cultural understanding and has prohibited some from unifying on common issues that affect melanated people globally. This is why Malcolm X during his lifetime so desperately advocated for Pan-African unity as a means to consolidation:

In a society where racial disparities and injustices seems to be at one of its highest peaks, Lamar, in harmony with the African aesthetic, gave the Grammy's and the world a little history lesson: just as Langston Hughes wrote in his prolific poem, "I too, am America", Lamar, in his performance, so blatantly and deliberately told the world, "he too, is Africa."

In a recent interview with the Grammys, Lamar gave some insight on what he "unlearned" about what was taught to him about Africa during his trip to South Africa.

"I felt like I belonged in Africa," said Lamar. "I saw all the things that I wasn't taught. Probably one of the hardest things to do is put [together] a concept on how beautiful a place can be, and tell a person this while they're still in the ghettos of Compton. I wanted to put that experience in the music."

He also discussed with MTV how "Alright" -- which many have adapted as the modern Black anthem for the #BlackLivesMatter movement -- was too, inspired by the inequities and injustices in South Africa, and the struggles that people endured historically and what he witnessed in modernity.

"They struggle ten times harder and were raised crazier than... I was," Lamar said. "Going out there really inspired me."

"I wrote a lot of records out there. Just going to South Africa and being able to move around out there like I did. That was a turning point", he continued.

So, in the same vein of Lamar's performance, it is important that from the Pan-African lexicon, we reclaim what was lost, what was considered "unworthy", and what was stolen. It is now, more than ever time that we unify because all in all we -- those within the Diaspora, those who are blessed with melanated skin, those darker peoples all over the world, we will be more than just okay -- because "we gon' be alright!"