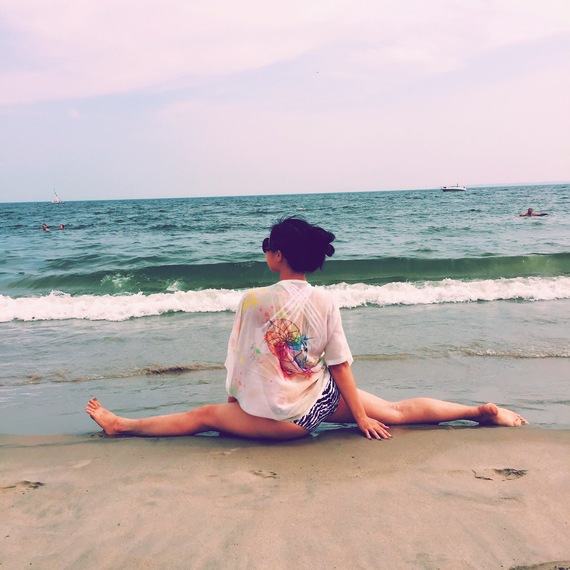 I started practicing yoga when I was a sophomore in high school, mainly to lose weight and find inner peace. Little did I know the spiritual and emotional effects I would feel from being a devoted yogi for almost a decade. I was convinced teaching yoga was my calling, and actively sought yoga teacher trainings after I graduated from college.

200 hours is the bare minimum you need to begin teaching yoga, but most places require at least a 500 hour certification, if not more. Some studios will pay you by the student, such as $5 per student, whereas other places will pay a flat fee depending on your experience.

Continuing education starts with 30 hours, and that too can cost hundreds to a couple grand. It's also mandatory if you want to register with the Yoga Alliance, the sole governing body of yoga teachers around the world. Then there are the registration fees and liability insurance, both of which are required as a yoga teacher.

I specialize in teaching trauma survivors and work at a shelter. Teaching survivors of domestic violence and sexual assault is deeply rewarding, and I am fortunate to have this opportunity. Teaching vinyasa classes, on the other hand, are a completely different story. The so-called camaraderie with other teachers I developed quickly made me realize how lonely being a yoga teacher can be.

Perhaps it was because I was teaching in NYC, but I rarely felt the kinship I thought a kula of teachers would be. Many of my colleagues were judgmental of my age, lifestyle choices (ie. not being vegan), and teaching style. Everything was a competition, based on how many followers you had on Instagram and the success rate of your class sizes. No matter how glorious it may seem, it is a service industry and you will interact with the worst of people on a day you woke up on the wrong side of. I realized that even though I enjoyed practicing yoga, teaching publicly was a completely different story. I recently stepped down from teaching in studios to focus on my work with trauma survivors.

Many people come to yoga hoping to be more lean and/or flexible. In India, it is viewed as a spiritual practice. My parents are Taiwanese and I grew up in a Buddhist household; it was important for me as a teacher to respect the ancient texts and reflect that in my classes, which many could not relate to when they were just looking for a way to sweat.

In the yoga industry, shiny printed leggings and the best sweat-proof mat are coveted items a yoga teacher is expected to have. When I went to a yoga conference, I attended a seminar from a renowned teacher who has her own trademark. The yoga class quickly escalated from a ten minute slow flow into this animalistic rave with a live DJ and glow sticks that felt so far removed from what I knew yoga as. In India, yoga was practiced on a thin towel or nothing at all before it became popular in the West, which has completely desensitized the culture of yoga, from celebrity endorsements making Buddhism mainstream to ignorant men spouting that yoga is for women only.

Yoga in the West is also geared towards the upper class -- the average price of a yoga class in NYC is $20. Even free yoga in the park can only happen dependent upon the weather; it is not a lifestyle that is attainable for everyone. People making minimum wage who are more concerned with putting food on their plates might have no interest in practicing yoga, and they shouldn't be shamed for their choices, which I often found my colleagues doing. I don't believe that "yoga is for everyone" when, for some, they have more important priorities.

Many students who are new to yoga expect miracles during their first class, but that rarely happens. We are not going into an advanced pose when you are a complete beginner. Obviously, as any kind of teacher, you're bound to have that student, but figure out if you're really cut out for this line of work. You also have to be careful of students who want to blur the line between student and teacher. I had students bringing me gifts, wanting me to give them more 'adjustments' in class and adding me on my private Facebook page, which I never advertised in my classes.

I regret accepting a late night ride home once from a student in Brooklyn, because our relationship was never the same afterwards. Add to the fact that lots of male students stopped coming to my classes when I rejected them. It was aggravating, especially when studios were demanding to know why my classes have dropped.

Towards the end of my year teaching, I developed significant health problems that greatly hindered my practice. I started getting heart palpitations even when I was walking, and had panic attacks throughout the day. Bending down sent my heart racing, and I found out I have a heart problem and Graves' disease. I was told specifically not to exercise for at least another year until my heart calmed down. When you no longer move as a yoga teacher, you can't move others, despite yoga being more than the physical -- pranayama, meditation, pratyahara, etc., yet those are rarely mentioned in classes, nor are they as profitable as asana, the physical component. If you're seriously considering becoming a yoga teacher, remember what part of yoga is important to you, and always hold on to it.

Voting Made Easy
Register to vote and apply for an absentee ballot today
Register now
More:
yogahealthy livingIndiaMeditationspirituality
Newsletter Sign Up
The essential guide to taking care of your mind and body
Subscribe to HuffPost’s wellness email
Successfully Subscribed!
Wellness delivered to your inbox