Atop the skylight of the Redwood Library and Athenaeum in Newport, R.I., lies -- improbably -- a silver skeleton key. The skylight is located in the Harrison Room, the oldest room in the oldest lending library in the country. The long-forgotten 18th-century key would fit neatly into the building's shuttered front door were it not resting high above on this sun-streaked skylight, out of reach to those who might wander through the library's aged stacks.

Such subtle curiosities abound in "To Arrive Where We Started From," artist Peter Eudenbach's series of six curatorial interventions in the library, the first of its kind in the two hundred odd years of the institution's history. Established in 1747, the Redwood Library predates both the public library system and the United States of America itself, its classical columns emanating the authority sought after by the new Republic. The library is now open to everyone but is still supported by its members, who pay dues in exchange for borrowing privileges. 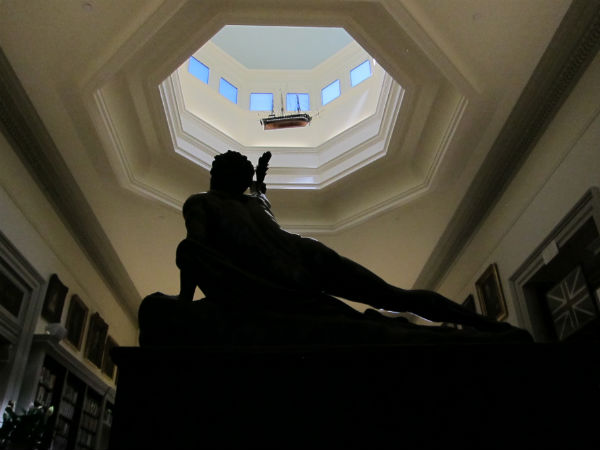 In Eudenbach's installation, a boat suspends hangs from the clerestory; the marble bust of a drowned sea captain squares off against an etching of the shipwreck that claimed his life; a glass case is filled exclusively with books about islands, the pulp paperbacks floating next to historic manuscripts. Each of these dream-like scenes are like Borgesian riddles, small koans that reflect upon ideas of mirroring, enclosure, secret knowledge, and eternity. The centuries circle and fold in on one another as the installations cohere into a larger meditation, a statement on a certain sea-salted solitude and the lure of unknowable terrains, the affective residue of Newport's nautical past.

"I felt like Robinson Crusoe," Eudenbach, a Newport native, said in a tour of the exhibition, referring to his process of mining the library's sundry 18th- and 19th-century collections. Like the literary castaway who created shelter from the stray tinder of the desert isle -- and indeed, islands are a reoccurring motif in the exhibition -- Eudenbach has constructed a kind of intellectual shelter from and for the library's objects. 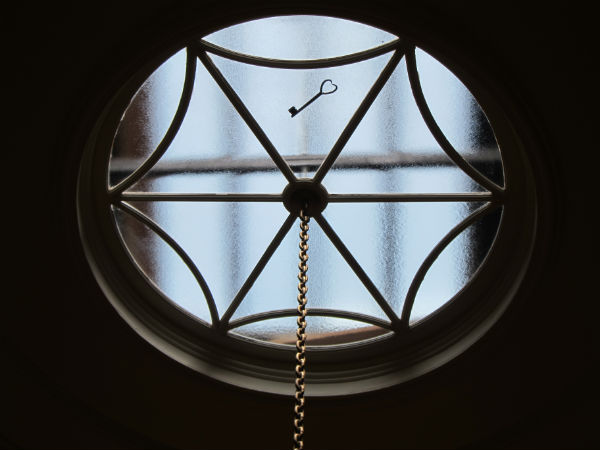 A mirror, a marble bust, a skeleton key, a life raft -- these simple things are given new potency through the dense web of associations and allusions woven by Eudenbach in this richly layered historical space. With a Masonic zeal, Eudenbach has assembled these tableaus using the reoccurring motifs of islands, octagons, and mirrors; his is an errorless universe in which precisely placed objects assume an allegorical punch. Shed of their practical or historic meaning, the collections are charged with a new animism; they become vessels of philosophical ruminations.

In Eudenbach's mytho-poetic world, history is no longer the random procession of events but an enigmatic cipher to be decoded for its underlying meanings. As Borges writes in his short story "The Library of Babel": "We walk the corridors, searching the shelves and rearranging them, looking for lines of meaning amid leagues of cacophony and incoherence, reading the history of the past and of the future."