As a black, trans artist, I crave to live an authentic life that validates all my identities. On this journey I will be interviewing a handful of black, trans thought leaders I have been blessed to share space with. As we honor the brilliance of each leader by sharing their words on this blog, let us remember that to be black and trans means to live a life filled with persistence. I am so grateful for all the lessons I have learned about myself from these powerhouses and am thankful that they are working hard to keep our community visible.

The first person to share a bit of herself with us is the always-inspiring Lourdes Ashley Hunter, whom everyone should know! Lourdes is a self-described black, trans revolutionary, academic and orator residing in Brooklyn. As co-founder of the Trans Women of Color Collective (TWOCC), she is leading a transformative movement that uplifts the narratives and leadership of trans people of color. 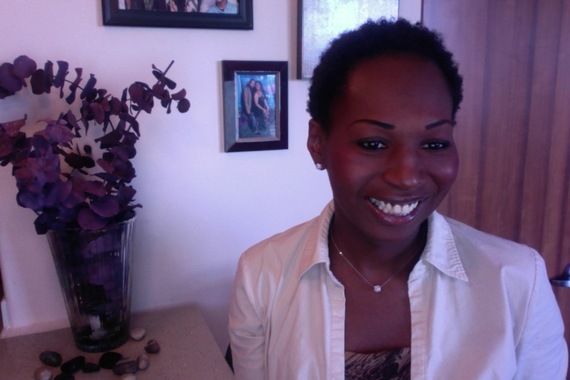 J Mase III: Who are you, and what gets you up every morning?

Lourdes Ashley Hunter: I am a black, trans revolutionary. I am a healer, orator, academic and educator, a dismantler of oppressive systems, a descendant of enslaved Africans, freedom fighters and liberators. I am a queen, goddess and sister. My life is fueled by a transformative movement that rejects the "equality meme" championed by mainstream LGBT NGOs and NPOs, as it mimics assimilation. Our collective fight for revolution, liberation, legacy, TPOC-interdependent, sustainable socioeconomic growth and development gets me up in the morning.

J Mase: How would you describe your identity?

Lourdes: I am a strong proponent of self-identification. I don't think the words have been translated into a language that has not been forced upon us colonized European settlers. My identity is defined by my politics. My politics are revolutionary.

J Mase: How did you get started in activism?

Lourdes: As a poor, black, trans woman, I was born out of and into activism.

J Mase: You helped to co-found an organization called TWOCC. What is TWOCC?

Lourdes: Trans Women of Color Collective was founded In September of 2013 by a group of trans women of color who came together after the vigil held for Islan Nettles by mainstream LGBT NGOs and NPOs without the inclusion of TWOC/TPOC leadership. The event lacked intentionality and respect for our lived experiences and narratives. Islan was a 21-year-old trans woman of color who was pummeled into a coma outside a New York City police station. She succumb to her injuries five days later. Even though NYPD pulled Paris Wilson off her bloodied body, he walks the streets free from prosecution. We simply had enough of our people dying in the streets. We simply had enough of mainstream LGBT organizations predominantly run by cis lesbian and gay folk controlling our narratives through strategic eraser and lack of inclusion, what they like to call "unconscious bias." We recognized and were enraged by that lack of representation of TWOC/TPOC in leadership roles and on the boards of these organizations who are leading the political platform for LGBT "equality." We were tired of being afterthoughts, photo ops, and deliverables for the not-for-profit-industrial complex. We decided to take agency over our lives, to control our narratives.

The primary focuses of our movement is to uplift the lived experiences and leadership of trans women of color. We do this by creating spaces to heal, grow, love, experience love and build sustainable TWOC/TPOC-sustainable initiatives that shift our socioeconomic growth and development. We also accomplish our mission by holding our allies and others accountable to the space they occupy in the movement and in our lives. We strongly encourage our allies to actively engage in creating spaces for accountability through peer education, thus fostering the elevation of consciousness. It is not the role or onus of TPOC/TWOC to be the sole source of information or education. Cis folk and non POC folk must do the work.

J Mase: If you could wave a magic wand over the world and fix any problems for the TWOC community, what would you fix?

Lourdes: I would prefer an anointed staff (I'm not the magic-wand type) that would dismantle all systems of oppression, primarily neocolonialism, trans misogyny and patriarchy. I would also redistribute all land, wealth and power.

J Mase: How else do you spend your time when you are not radically shifting paradigms?

Lourdes: Chilling with my peeps, slaying the grill, enjoying good wine and basking in the love of community.

J Mase: Anything else you want to share with folks that hasn't already come up?

Lourdes: Yes, it is critical to our movements that we are funded. Those in positions of power have the ability to make this happen. Fund the work of grassroots TPOC/TWOC radical momentum builders in our community such as TWOCC,, Dr. Kortney Zeigler and Trans*h4ck, Angelica Ross and TransTech, TransJustice and Audre Lorde Project and Darkmatter, just to name a few revolutionaries that I know firsthand who are doing the work to advance trans POC liberation.

Thank you to Lourdes for being the first leader highlighted in this series!

Want to know more about Lourdes? She can be contacted for bookings, trainings, interviews, lectures and workshops at lourdesashleyhunter@gmail.com. She can also be reached on Twitter @hunterlourdes and @twoccnyc, and on her personal Facebook page and that of the Trans Women of Color Collective.