It gives me great pleasure to introduce writer/poet, Neil Spirtas, to our Huffington Post Community. In his essay, Neil muses about publishing the Poet in today's literary climate.

Published works of art are few and far between compared to the percent of rejection letters one receives. Humbled are we, us writers, because it is no easy task to sweat and toil, spending hours alone at our computers and desks, to subsequently receive a bevy of rejection letters in the mail.

A friend of mine who loves to write has refused to venture into getting his work published. We have discussed this issue at length over coffee with me prompting him to share his work on a larger scale than at readings where a dozen to fifteen show up. Not to belittle community readings, for they and community events ... "are essential credentials and a witnessing and reporting from the frontlines of humanity," as St. Leo College English instructor, editor and mentor, Gianna Russo has said. But this gentleman's writing is a gift to the world that should be shared with more than family, business associates and friends listening in the corner of some bookstore. He counters with why should he submit to the astronomical numbers faced by others such as The Diary of Anne Frank being rejected 10 times, William Golding's Lord of the Flies rejected 20 times and Stephen King's first novel, Carrie rejected many, many times? Besides, poets' works get published at even smaller percentages. I pointed out to him that yes, he is correct, but since Doubleday published the diary after WWII it has sold more than 20 million copies in more than 40 countries and Carrie sold over one million in one year alone.

Recently, I participated as a panelist for The Other Words Conference in St. Augustine, Florida. This year's theme was "The Literary Art of Writing Funny". Topics and sponsored readings varied, for example, "Literary Rock and Roll", "Engaging an Audience by Making Literature Weird", "Crying So Hard We're Laughing" and "How Far is Far Enough?" Those presenting included a few Poet Laureates, Harvard professors, Pushcart Prize winners and Fulbright Scholarship Award lecturers/winners.

Secondary to my assignment of 'getting published or not' ... was to make observations about this conference sponsored by the Florida Literary Arts Coalition, held at the historically-rich Flagler College in America's oldest city, coincidentally and literarily adjacent to the first school house built in the St. George Street historic district. These literary conferences are the breeding ground for great artists and their works to be shared. Writers, editors, publishers attend from all over the country. Poet and New York University writing teacher Kenneth Hart purported that ... "these events are important for a writer - to be connected, to get one's work out there and on rare occasions, upon hearing a poet read, he might solicit work from the reader." Participants socialize over wine and cheese receptions, can be seen observing the City's annual Pirate invasion or peering at the eagles near the bell tower just above The Solarium Room (at Flagler College).

Some of the presenters/writers I admire the most were queried for my research on this article. Upon one celebrated writer, May Swanson Award winner and Volusia County's (Daytona Beach, Fl. area) Poet Laureate M.B. McLatchey's advice, I went straight to the wonderful book Letters to a Young Poet by Rainer Maria Rilke for wisdom and inspiration. My philosophy is that writing is an art form at its best and a gift to the world. What if the great sculptors never displayed their work or performers of the stage shied away from the great theatres? Maybe we are talking too grand of a scale for most artists. That being said, several presenters shared that your poetry/writings find you. Too esoteric? Better explained by Rilke, "Perhaps it will become apparent to you that you are indeed called to be a writer. Then accept that fate; bear its burden, and its grandeur; without asking for the reward, which might possibly come from without." McLatchey also warned that publishing is a natural consequence of powerful writing, but it should never be the explicit motivation for writing. She illustrated with poet Milosz's wisdom that it is a transformative act whereby through deeply individual and solitary work, "we commune most powerfully with human kind." Writers find some solace that when they are experiencing disruption and obstacles in their life, is when their most vivid writing occurs. Hemingway said; "Everyone is broken by life but afterwards many are stronger in the broken places." Finding a home for one's writing is as important as finding the writer's place in the universe (and a community of writers). I've found this at St. Augustine's gem of a conference.

Here are a few tips for aspiring writers:

• Ken Hart's advice; "Don't be discouraged over rejections. Literary journals get thousands of submissions each year, and can only publicize a hundred. So keep trying. Familiarize yourself with that journal and what they're looking for."

• After surveying several successfully published poets -- all had chapbook/collection series published - the average rejection rate was around 88 percent. They received, on average, almost nine rejections before any poem or any piece of prose was accepted. And from what I've heard, this rate was pretty good!

• In The Fault in Our Stars movie there is a famous quote, "If you want the rainbow, you have to deal with the rain." Publishing and writing are the same.

After many more coffees, my friend has decided to send his poetry to publishers. I hope I had something to do with his change of mind. Anecdotally in my own plight, I am somewhat literarily homeless, searching for the publishing home of my first Chapbook. Within the community of writers, it is my hope that we both get out of the rain and find our place to shine. 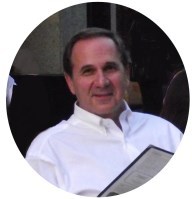 Neil Spirtas is a native of Belleville, Illinois; born in St.Louis, Missouri ... currently he resides in Bradenton, on the west coast of Florida. Neil earned a Bachelor of Science in Special Education and a Master of Science in Community Development both from the University of Missouri. He also received graduate certification from Stanford University - Institute for Organization Management and University of Oklahoma - Institute for Economic Development. Neil had the privilege of working for the award-winning Manatee Chamber of Commerce, the largest chamber in the Tampa Bay metropolitan area and the National Chamber of the Year (2007) as a Senior Vice President.

With a successful career at the land-grant institutions of Penn State University and the University of Florida before his chamber stint, Neil helped formulate community forums in rural America on phosphate mining in the

While at the Manatee Chamber he was instrumental in helping to form two successful transportation groups - one a statewide safety organization (Stop on Red Coalition) and STARTUPS, which advanced and advocated over $50 million for primarily regional projects. Legislatively, most noteworthy was the passage of statewide formula change in technical college funding resulting in $2 million annually to the local school district.

Mr. Spirtas retired from the Chamber to pursue personal goals, philanthropic and writing endeavors. Having served on numerous boards, he is Essay Contest Lead Judge - Manatee and Sarasota - for the International Consular Corps of Tampa Bay and Board member for Better Futures for White Buses Foundation. He works part-time for the University of South Florida, Sarasota Manatee in Employer Development.

His writing has evolved from statewide and national papers on water conservation and public policy formation to poems found in The Roam, Poetica, Free Expression (forthcoming in January) and Current magazines.