What is our collective attitude about people who are sick?

Being sick today and taking a sick day or sick leave requires courage. While it may draw some sympathy, there is pressure to justify the day off and prove you are sick enough, not just sick. It is assumed that if you don't go to work, you also will also not go to movies, shop, or go out for dinner.

And, if you are really sick, no one wants you around. We may be told, "If you are sick, stay home." Because not only could your illness be contagious, but being in a bad mood because you are sick makes you less productive and can darken the energy and motivation for everyone.

So, in other words, if you are sick, you should go away until you are all better.

Defining What It Means to Be Sick

There is actually a sociological description of "being sick." Talcott Parsons, one of the most influential sociologists of the 20th Century, conceptualized the "sick role" in the 1930s.

Parsons described a sick person as one who has been excused from normal responsibilities - from working or being productive. In turn, the sick person is obligated to do whatever it takes to get better as soon as possible.

Furthermore, according to Parsons, the sick person must see a medical professional, with the caveat that he or she is obligated to follow medical advice to the "T." Which is what the millions of people in the U.S. do today when they go on disability for medical conditions.

Obviously, this description of the "sick role" does not apply in all situations. Right now, millions of people (including those who work in hospitals and clinics) are going to work sick because they cannot afford to lose income from missing work and they don't want to look bad to their coworkers or supervisors. In fact, in many situations, if you call in sick, you are challenged and threatened with losing your job or, at the least, losing your place in line.

In addition, the flu season, which comes every year, has a higher than necessary rate of sickness and death because people go to work sick, taking over-the-counter (OTC) meds to mask their symptoms. But, OTC meds do not the stop the contagion.

Is Being Sick Deviant Behavior?

When Democratic Presidential Candidate Hillary Clinton almost collapsed from having pneumonia in September, her opponent vilified her. Clinton's condition was blamed on her, and, her effort at trying to work through it was criticized.

Walking pneumonia is not uncommon, it is not contagious, and those who have it may not know they have it. Still, Clinton's capacity to perform on the campaign trail or as President of the United States was questioned.

Although Clinton was back to the campaign trail and its grueling schedule within 5 days, never showing any sign of being so ill. She received neither praise, words of concern, nor the appreciation that each us would want. 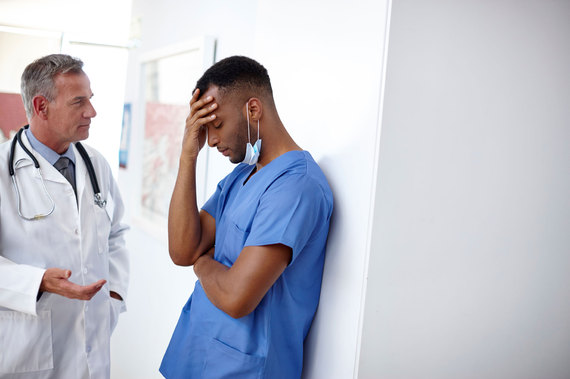 Our work ethic is not friendly to being sick. People in lower income brackets cannot afford to not work and most often, have no paid time off. Those who work multiple part-time jobs are in the same situation.

Higher paid professionals, similarly, may feel that if they take even a day off, they will lose their place in line. Their competitors will take advantage of their absence or their supervisors will pick someone else.

So, how sick do we have to be to take a sick day? Do we consider who else will be the victim of our cold or flu? Do we feel we have no right to take time off? Have we ever paid a high price for ignoring the obvious -- like getting pneumonia?

Or, what about not wanting to take time off to get a mammogram or PSA test because clinic hours are during work hours? What if after finally getting those tests, we find out that that we have cancer?

How do we really support the health of ourselves, our coworkers, and our communities? How do we turn disdain in the workplace for those who are sick into compassion?

I think it is time to address this. Sooner rather than later.