Some writers like to reflect on modern history from the distance of a decade or a generation. Others prefer 25 or 50 years as appropriate reference points. Very few stop to think about how our lives have changed over the most recent third of a century. But if we look back to 1980, the results are startling.

Tamar Lewin's recent article in The New York Times entitled "As Interest Fades in the Humanities, Colleges Worry" describes how the lure of science degrees which could lead to high-paying jobs has left some educational institutions (like Stanford University) top heavy with faculty teaching the humanities (45 percent of its undergraduate division) to a rapidly shrinking student population interested in the humanities(15 percent).

While some look to charter schools as a means of strengthening the intellectual capabilities of America's children, one segment of the educational system (often ignored by government, politicians, statisticians and major corporations) continues to thrive. These are not schools of medicine, law or those specializing in STEM fields (science, technology, engineering and mathematics). Nor are they the kind of feel-good institutions where everyone gets a medal in order to ensure that no one's self esteem suffers.

These are major conservatories of music, where students are dedicated to perfecting their vocal or instrumental skills, learning the art of interpretation, understanding the importance of nuance and, by performing in vocal ensembles, chamber music groups and symphony orchestras, following a tried-and-true technique for learning all about teamwork.

Like many athletes, these young men and women have trained for years and auditioned for acceptance in a field where there is no such thing as a "safe school." While they will continue to compete with other musicians at future auditions, the person with whom they are really in competition is themself.

Polishing their art involves the ability to add increasing amounts of interpretive depth and musical dexterity to their performance skills. Thankfully, the history of music provides a recognized pathway with clearly defined structures and repertoire to guide their growth.

Earlier this month, I visited the San Francisco Conservatory of Music for an orchestral concert by a new class of students. The performance led off with Debussy's Nocturnes, conducted by young Tyler Catlin. 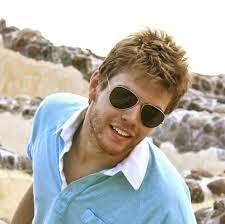 This was followed by Jean Françaix's 1982-1983 composition, Concerto for Guitar and String Orchestra, performed by John Charles Britton (who accompanies soprano Lauren Lutz in the following performance of Bachianas Brasileiras No.5 aria by Heitor Villa-Lobos).

In the second half of the program, Alasdair Neale led the student orchestra in a rousing performance of Sergei Rachmaninoff's popular Symphonic Dances Op. 45, which was brilliantly enhanced by the acoustics in the San Francisco Conservatory of Music's intimate 400-seat Concert Hall.

As one watches and listens to students performing in a conservatory orchestra, it's impossible not to admire the dynamics of their performance, their youthful collegiality and their ability to quickly learn new music. All of these qualities reflect their determination to grow and mature as musicians while absorbing a wealth of acquired musicology and rising to the challenges of various musical styles.

Luckily for Bay area audiences, the San Francisco Conservatory of Music offers free admission to many of its master classes. Not only are these sessions (taught by such world-class artists as Stephen Hough, Menahem Pressler, Frederica von Stade, Martin Katz and Greer Grimsley) fascinating for the historical details which are revealed about various composers -- and the opportunity to watch students fearlessly attack some very difficult pieces of music -- the attention to detail and performance technique during these sessions is mind-boggling from a diagnostic standpoint. One can learn more about the inner workings of a piece of music during one of these sessions than from years spent listening to recordings by various artists.

This performance offered a fascinating contrast to Mona Golabek's one-woman show, The Pianist of Willesden Lane, that I recently saw at the Berkeley Repertory Theatre. However, to truly appreciate the promise and strength of a musical education, I would urge readers of this column to take time to savor and digest the following three articles before rushing out to buy tickets to Golabek's show (as well they should): 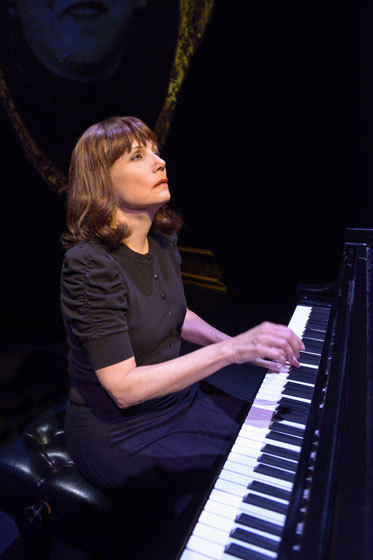 Mona Golabek performs in The Pianist of Willesden Lane
(Photo by: Mellopix.com)

In his "Prologue from the Artistic Director," Berkeley Rep's Tony Taccone writes:

Words are the lifeline of our stories, our narratives that create meaning and sustain us beyond what we think we can bear. In the hands of a great writer, their power is both intoxicating and even intimidating. And yet, and yet.. how shallow words can be! As far as their reach can take us, it often only reveals the places they cannot go; for words live on the surface of our consciousness, groping to give shape to the vast, unknowable, volatile forces that live underneath and around us. During our most intense experiences they almost always fail us. They simply can't measure up. In the most dramatic moments of our lives, we remain speechless, searching for another way to express ourselves, something that captures what cannot be completely captured.

Which leads us to music. The Pianist of Willesden Lane lives in the space where words end and music begins. A true story describing a young girl's escape from Nazi Germany to London, the play is really the story of how music sustains us, connects us and even saves us. A young girl arrives in a strange city, bereft of her family, left with a kind of aloneness that only music can comfort. The story is told to us, years after the fact, by the young girl's daughter, who can only reveal the full story by letting us imagine it through music. The words of the text give way to musical notes, to soaring classical compositions that free our imaginations and tap into another realm of experience. We can choose to go anywhere with the music, through whatever portal the music evokes.

More than most Holocaust stories, Golabek's tale of her mother's escape from Germany via the Kindertransport that followed Kristallnacht illustrates how music nurtures the soul, even if someone is too young, too confused, or too scared to understand the power it can have over people. It also gives an audience rare insights into the bravery and stubbornness of young musicians who sometimes have to fight for every opportunity they can get.

In her program note, Golabek writes:

My mother, Lisa Jura, was my best friend. She taught my sister, Renee, and me to play the piano. We loved our piano lessons with her. They were more than piano lessons -- they were lessons in life. They were filled with stories of a hostel in London and the people she knew there. Her stories were our folklore, bursting with bits and pieces of wonderful characters who bonded over her music. Sitting at the piano as a child, I would close my eyes and listen to her lilting voice and imagine her world. She always believed 'each piece of music tells a story.' Her legacy has inspired my music and my life. I pass along her story in the hope that it may enrich the passion and music that lies in each of us. 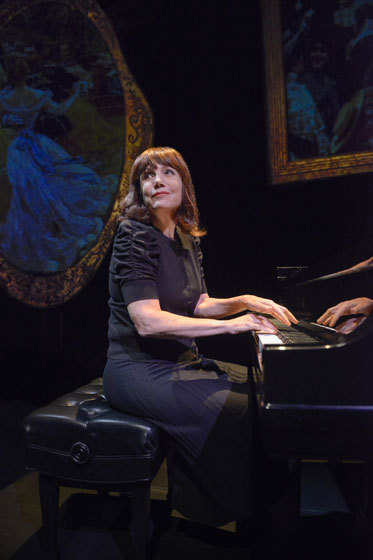 Mona Golabeck performs in The Pianist of Willesden Lane
(Photo by: Mellopix.com)

Adapted and directed by Hershey Felder, The Pianist of Willesden Lane is quite similar in shape and form to Felder's solo show, George Gershwin Alone. A series of oversized picture frames plays host to projections designed by Andrew Wilder and Greg Sowizdrzal that form integral parts of the unit set designed by Trevor Hay and Felder. The result is an extremely fluid venue in which Golabek can share the story of a family torn apart by forces of anti-Semitism.

Golabek proves to be a no-nonsense performer, enveloping the audience in her family's history while performing works of Beethoven, Bach, Chopin, Grieg, Scriabin, Rachmaninoff and Gershwin. Just as her music enhances her story, the revelations of her story serve to enhance the music.

If you're looking for an extremely poignant evening of substantive musical theatre, I can't recommend The Pianist of Willesden Lane strongly enough. In the meantime, sit back and enjoy this video clip of Golabeck sharing her personal experiences and insights (as well as her music and musicology) with Martha Stewart.