Pamela Geller's "Support Israel, Defeat Jihad" ad campaign arrived in New York subway stations this month. The campaign strives to be as clever as it is malevolent. Geller claims it is simply a pro-Israel political statement. But the ad's text is a calculated echo of Ayn Rand's slur that Israel's opponents, and indeed all Arabs, are "primitive ... savages."

Not missing the point, the New York City transit authority first rejected the ad as demeaning, only to be forced by a Federal District judge to accept it because of the First Amendment right of free speech. 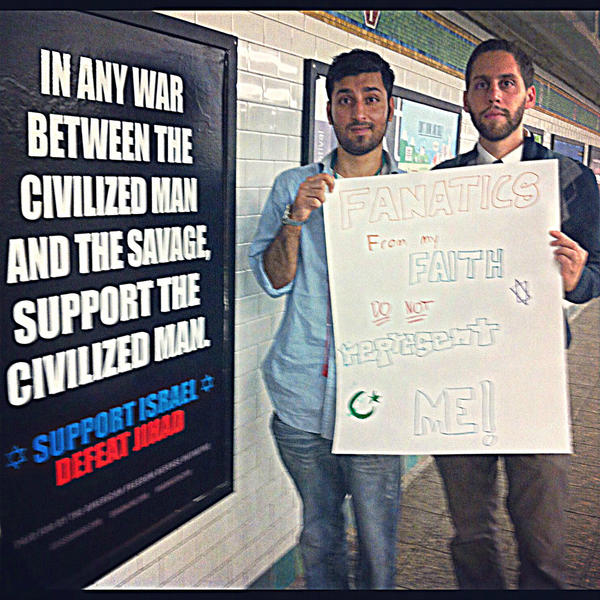 The issue of free speech is, however, a red herring. The campaign aims to distract and confuse Americans. Geller has played that game before. Concern for sensitivity to victims' families served as a cover for the anti-Muslim agenda in Geller's last major initiative, the controversy she helped create around what she misnamed the "mosque at Ground Zero." This time, Geller wants to link her ad campaign and its legal battles with free speech in America and backlash in the Middle East. She claims opponents of the ads are un-American. She is wrong. Opposition to bigotry is as much a core American value as freedom of speech. It is Geller's effort to set the two at odds that flies in the face of our ideals.

Geller's ads seek to provoke the behavior she claims to fear, and to provoke enough of it to create fear in others. Like Geller's other pet project, "Stop Islamization of America," the campaign is designed to stoke anxiety that American Muslims do not understand and support America's freedoms. Geller posts provocative ads. She then reports on her blog -- with great satisfaction -- any examples of Muslim Americans reacting in ways that fail to appreciate the complex, messy business of freedom of speech in this country. At this, she cries, "The sharia-ization is beginning!"

In fact, major Muslim American spokesmen responded to the ad altogether appropriately. CAIR national communications director Ibrahim Hooper said, "The First Amendment grants everybody rights, including to be a racist and a bigot." But you won't find that statement reported on Geller's blog. Nor will you find the picture of an orthodox rabbi and a Muslim protesting the ad with a sign stating "Fanatics from my faith do not represent me!"

As Jews, we regularly expect Muslim and Christian friends to denounce anti-Semitism and terrorism within their own communities. In fairness, it is our duty to join others in stepping up when Jews are the ones promulgating hate. Geller knows well that apparent support for Israel is one way to package an anti-Muslim message that makes it tricky for Jewish leaders to offer unequivocal and unified denunciations. Her tactic, however, does not seem to be paying off across the board. Even Jews who do not usually agree on matters related to Israel are refusing to be distracted. The Anti-Defamation League carries on its website a condemnation of Geller for "consistently vilifying the Islamic faith under the guise of fighting radical Islam." On Sept. 21, the Jewish Voice for Peace, Jews for Racial and Economic Justice and Say No! issued a statement condemning Geller's ad. The same day, the Jewish Council for Public Affairs decried Geller's ads as "Bigoted, Divisive and Unhelpful." Rabbi Rachel Troster of Rabbis for Human Rights North America has spoken out, as has the president of the Union of Reform Judaism, Rabbi Rick Jacobs.

In his famous letter to the first Jewish synagogue in America, George Washington wrote that the United States government grants "to bigotry no sanction." But because our government does grant to all its citizens freedom of speech, it will protect the right of Pamela Geller to post her bigotry, just as it allows over 900 hate groups, including anti-Semitic groups, to operate. In America, the work of giving bigotry no sanction devolves on citizens. We are the ones with the liberty -- and the obligation -- to speak our own truths in the face of hate mongering. And Geller isn't clever enough to stop us.