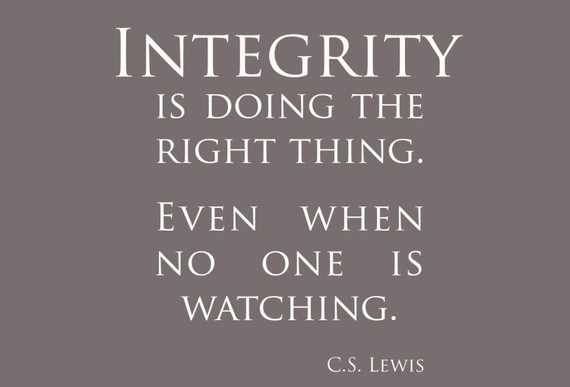 "Waste no more time arguing about what a good man should be--- Be one." The gripping words of Roman Emperor Marcus Aurelius ring true, and truer than ever; be true to others, true to the world, but most importantly, true to yourself. And within every self lies a conscience, a G-d given moral compass to discern right from wrong and wrong from right- from the very moment we depart from the mother's womb.

I am no preacher, but allow me to contend: there is an eternal power beyond this universe to which we mortal, faulty human beings ascribe- a power greater than ourselves; a constant, uncompromising, faultless form; the paramount of moral integrity; G-d. And what surer way for us mortal, imperfect human beings to be certain of what is ethical and what is not, than to have the standard bearer of ethical conduct reveal it to us all, through our inborn conscience which He entrusts in each and every one of us.

You see, conscience is the very virtue that sets us apart from every other animal in the natural world- it is the fingerprint of G-d, a moral compass that is cultivated or challenged by the surroundings in which we are raised. Conscience, is like a baby; cradle and nurture it, and it will thrive and grow; torture and neglect it, it will wither and die But along with conscience come reason, desire, and free will; free will that can be swayed by culture, society, desire, evil inclination, immoral reasoning, hatred, and intolerance; free will that can learn to subdue our very conscience.

When people commit evil, they allow culture to drown their conscience- letting themselves, and society justify the atrocities they've committed. Hitler penned Mein Kampf to convince himself, and the world, that it was okay to systematically murder 6 million Jews and 5 million other people; that is was reasonable to commit the unthinkable; that it was acceptable to neglect a basic tenet of human nature, and understandable to abandon the sanctity of human life. Nazis reasoned their conscience through hatred and intolerance; buried their moral compass until its voice fell mute.

Writer Ayn Rand had it right: Integrity occurs when a man realizes he "..may permit no breach between body and mind, between action and thought, between his life and his convictions--that, like a judge impervious to public opinion, he may not sacrifice his convictions to the wishes of others, be it the whole of mankind shouting pleas or threats against him..." In the words of writer Don Galer:

Integrity is rock-like. It won't crack when it has to stand alone, and it won't crumble though the pressure mounts. Integrity keeps one from fearing the white light of examination or resisting the exacting demands of close scrutiny. It's honesty at all costs.

Integrity supersedes rules, that is, a person of integrity needs no rules to dictate his speech or his actions, for He possesses the unwavering principle, conscience, and knowledge to do the right thing at all times, even when no one is watching. A person of integrity has the guts to cling to his moral, even if means standing strong in a culture weakened by hypocrisy. And sometimes, true integrity requires the strength of character to break the unjust rules of society, culture, and government, even in the face of adversity. That is why some men travel the path least taken, and end up being right when everyone else is wrong.

In the darkest of ages, brave men and women have risen up against the immorality of their times and defied the norms and challenged the rules, and that is integrity: white abolitionists that joined the underground movement, helping thousands of black slaves escape to freedom; men and women of valor who led a movement of Civil Disobedience against the injustice of their times: Martin Luther King Jr., Rosa Parks, Ghandi, Nelson Mandel, Malala Yousafzai- all raised a voice of conscience for those who were silenced; non-Jews in Nazi occupied Europe who risked their lives to rescue Jews during the Holocaust, displaying moral greatness of the highest order.

In the compelling words of Pastor Peter Marshall, "If you don't stand for something, you will fall for anything." Because a person of moral integrity has a heart of gold, a spine of steel, and a conscience of iron; a person of integrity is a man who cannot be moved. So, will we define society, or will we let society define us? The choice is in our hands; the decision in our hearts.