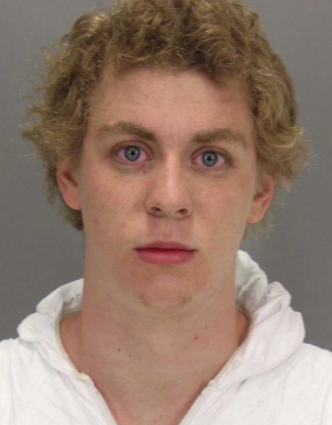 If anyone is confused why Brock Turner, the spoiled, self-righteous prick who blames everyone but himself for brutally raping, sodomizing, and dehumanizing an unconscious, defenseless woman behind a dumpster at Stanford University, look no further than his father.

"His life will never be the one that he dreamed about and worked so hard to achieve," Daddy Dan Turner wrote. "That is a steep price to pay for 20 minutes of action out of his 20 plus years of life."

Am I the only one who just threw up in my mouth?

Daddy Dan worries about Brock's inability to rest.
The victim now sleeps with the lights on for fear of being violated against her will.

Daddy Dan says Brock has never been violent to anyone, including the victim.
The victim says she woke up in the hospital hours after her assault sore from multiple abrasions and lacerations.

Daddy Dan is sad Brock will never realize his dream of swimming in the Olympics.
The victim is sad she will never be the woman she was before Brock's vicious attack on January 17-18, 2015.

Screw you, Daddy Dan, for coming to your son's defense. Two men saw him violate an incoherent woman in the dark and, now, his revolting romp has come to light. Alcohol is not an excuse. Sexual promiscuity is not an excuse. Being homesick at college is not an excuse. You know what he did. A juror of his peers convicted him of this heinous crime (which, by the way, is an insult to dub "20 minutes of action").

Aren't you ashamed, horrified, angered by your son's decision to dive into an incapacitated woman like a swimming pool, concerned about only the time he took to finish, not if she was awake or not? The same reason you're not disgusted by his "20 minutes of action" is the same reason he did it, the same reason why he doesn't own his well-earned title as a sex offender. Until you come to terms with your failings or misogynistic tendencies, neither you nor Brock will ever have a prayer of repaying your huge debt to society.

As a mom, I understand loving your son beyond comprehension or reason. I, too, adore my boys with every fiber of my being. But the love does not cloud my judgment when it comes to setting an example, when it comes to teaching wrong from right, when it comes to accountability, repercussions, restitution...all of the not-so-fun but vitally important lessons one must teach in the parenting sphere. I can say, with full conviction, that if one of my boys mercilessly preyed on a person for his own pleasure, he would not only have to answer to the authorities, the college, the public and, most importantly, the victim. He would also have to answer to me.

The reality is this: Your son is a despicable piece of sh*t who targets the weak to assert his own strength. I am sure it's not the first time he's exhibited this trait; maybe you applauded it at swim meets because you never thought he would apply it to break a young woman's spirit or the law. But that's exactly what he did.

Please remove your head from your a$s, Daddy Dan. Stop making excuses. Brock is not your golden boy anymore. He's a convicted rapist who has been banned from swimming for life. He's going to jail for a pathetically short six months. Use that time to reassess your own role in bringing up Brock.