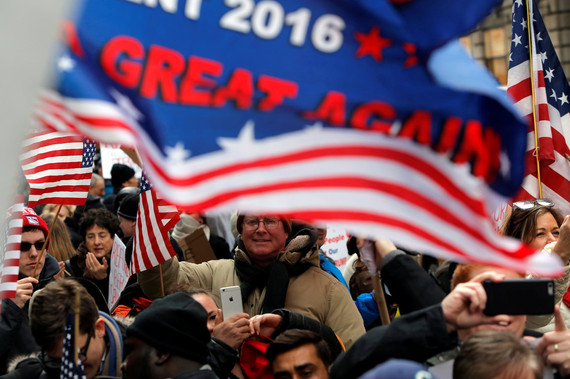 The election of Donald Trump may have come as a cold shower, but it was to be expected in a world that's increasingly frustrated with a profit obsessed globalised economy. Not only have jobs been lost and inequalities increased, but the exploitation of natural resources and the conflicts it fuels, have triggered a massive exodus of refugees and economic migrants. These developments are threatening to tear entire societies apart. Wealth has amassed at the top, in ever fewer hands, with a bottom of the pyramid fighting for the crumbs.

Against this backdrop, Trump's promise of protectionism has found appeal among many people marginalised by neoliberal globalisation. The paradox is that Trump himself is a staunch capitalist, who has massively benefited from the globalised economy he claims to oppose.

While the popular sentiments that gave rise to Trump are understandable, the solutions offered are damaging to the very people whose interests they claim to promote. Yes, we need to challenge economic globalisation, but not to build walls and segregate societies. To the contrary, we need more integration and cooperation. We need a system that levels the playing field between the big corporations benefiting from globalisation and the many small businesses and workers who have lost out. In a word, we need new economic system that pursues social well-being rather than growth.

Why we need to move beyond growth

In my new book, The World After GDP: Economics, Politics and International Relations in the Post-Growth Era, I argue that this shift is only possible if we recognise that our obsession with global economic growth is the source of many tensions societies face.

Our model of growth, represented by the gross domestic product (GDP), has portrayed globalised markets as the driving force of prosperity. It's also pushed for increased production at all costs. As a result, industrial value chains have shifted to the Far East, with corporations taking advantage of the cheaper local workforce. This has triggered resentment among workers elsewhere and generated a massive ecological degradation in these allegedly 'emerging economies'.

Moreover, the reason why Wall Street has become so powerful is because growth makes us believe that financial markets are best at allocating resources and creating wealth. The 2008 collapse was a wake-up call. But apparently it wasn't loud enough if we consider that both former US President Barack Obama and Trump have filled their governments with investment bankers.

The quest for growth has destroyed informal economic systems, which are a critical safety net for many, and replaced them with formal market activities, which benefit a few. It's created incentives for economies of scale leading to the supremacy of big companies at the expense of small businesses. It also favoured competition against cooperation, has portrayed the exploitation of nature as progress and reduced citizens to mere consumers.

We have seen this madness playing out in Africa too where the 'Africa rising' mantra has been used as an excuse to accelerate the exploitation of people and nature while presenting it as a successful development story.

The promise of a post-GDP world

The good news is that the international community is ready to shift to a post-GDP idea of prosperity. I believe here is a crucial opportunity to turn the global economy upside down.

Many calls have been made by institutions, from the UN to the World Economic Forum and the Organisation for Economic Cooperation and Development for a shift to a new definition of prosperity. This points to a focus on inclusivity and sustainability, rewarding countries and companies that increase well-being and punishing those that undermine it (often because they are hooked on growth). And the Sustainable Development Goals may offer the much needed entry point to change the rules of the game.

Indeed, when the social and environmental costs of growth are taken into account, a completely different picture of development emerges. Take India and China, the two rising stars of the growth ideology. They are expected to spend hundreds of billions of dollars annually to address the crises generated by pollution, contamination and social inequality. These costs are conveniently disregarded by GDP, but they are real and hefty.

At the global level, many large industries are anything but efficient or even profitable. A UN-sponsored study shows that some of the largest multinational corporations, from the fossil fuel sector to mining and intensive food production, are responsible for more damage to society and the environment than the revenues they generate. They may be good for growth (mostly of their pockets) but not for well-being.

With a post GDP framework, it becomes evident that global trade bears more costs than gains because of its impact on the environment and society. We should rather pursue regional trade systems - within countries and across borders - empowering communities to build equitable and sustainable local economies. Renewable energy becomes a no brainer as profitable, cheap and empowering. Oil and coal are exposed as obviously inefficient, expensive and damaging.

A post-growth strategy would result in putting people and their ecosystems at the centre of development policy. This would help the building of a different economy from the bottom up. The outcomes would include creating decent jobs, facilitating regional integration and cross border partnerships among small businesses and supporting families and communities. By moving beyond growth, we can address many people's demand for change. And we can escape the anachronistic and dangerously simplistic solutions represented by Trump.

Lorenzo Fioramonti is author of a new book The World After GDP: Economics, Politics and International Relations in the Post-Growth Era.