To Cry And Laugh, Simultaneously 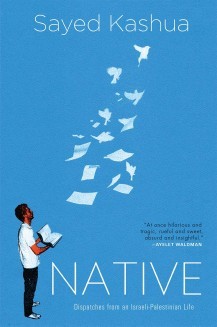 "Remember, whatever you do in life, for them you will always, but always, be an Arab.
Do you understand?"

Palestinian-Israeli writer Sayed Kashua should be commended for writing this book, as should be the publishers who took on the task of bringing it to the English reading community. Where diplomacy has failed, politics has stumbled, and common sense remains a rare commodity, one hopes that Kashua's shrewd satire and political barbs can break open closed minds and pave the way for a breakthrough for Palestinians and Israelis. If not, Kashua is fully content in just making the reader laugh, then freeze, knowing the words are reality, then cry, as he pokes fun at everyone, mostly himself.

Kashua's poor wife! She seems like such a wonderful person, loving and caring, but she is the target of his relentless attacks and haphazard lifestyle. I'm actually considering starting a humanitarian drive to support her, a sort of Brexit, maybe we'll call it Kaexit. You'll understand after you read the book.

This book of short stories is organized into four parts based around specific timeframes, as is each story. The parts are: Warning Signs (2006-2007), Foreign Passports (2008-2010), Antihero (2010-2012), The Stories That I Don't Dare Tell (2012-2014). For anyone living in Israel/Palestine, or even having an inkling of knowledge about the places, the ability to relate to the story lines is immediate. Kashua dives much deeper than the superficial political issues; he enters his home, family, culture and so much more. The most volatile chapters are when he enters his own mind; read with caution, always remembering that satire comes from reality.

Given I read this book while on a vacation with my family in the US, it took on even more of a meaningful read. Kashua writes, "There are Israelis who say that only after leaving the country did they realize how illogical life is there, how stressed they were, and how all of a sudden there are different concerns now. Concerns related to work, to everyday life, to the weather, and mainly to the family." He could have easily replaced "Israeli" with "Palestinians," as he frequently does, and all would have remained true. Kashua comically amplifies the convoluted reality in both Palestine and Israel, which is causing the younger generations to voluntarily walk out and relocate to saner corners of the world--I would add, only to find those new corners are called Brussels, Paris, London and Orlando, all with their own share of convolution.

As Kashua walks the reader through his family's decision to leave Israel and emigrate to Chicago, he writes, "I must help my children understand that Israel is not the end of the world--that if, God forbid, they don't succeed there and they feel ostracized, different, or suspect, or when reality blows up in their faces, they'll know that there are other options. It's true that they'll be different, but in a different way. They'll be immigrants, and maybe they'll have an accent, and they'll feel a little strange. But they'll be strangers in a strange land, and not in their homeland." That last line says it all! Palestinians, be they citizens of Israel or residents living under Israeli military occupation in the West Bank or Gaza Strip, awaiting their long-delayed state, are all being made to feel like strangers in our own land. The result will be tragic.

Kashua repeats a phrase that his father repeatedly told him, "only the beginnings are hard." Let's believe that and hope that new beginnings don't have to include one reaching a point where they can no longer live in their own homeland, but rather restart their lives right at home.

Reviewing this book evoked a serious contradiction in my mind. On the one hand, the book deserves to be read and commented on in its own right, having been written in Hebrew and translated into English. It's a book aimed at our funny bone, but the underlying truths are too close to home. A hopeful takeaway from this heartfelt effort is that more Palestinian citizens of Israel are making their voice heard, in other than Arabic, which holds the hope that as more people, especially Jews around the world, get a peek into what Israel has become, change will be forthcoming.

The Saqi Books website states, "Sarah Cleave, publishing manager of Saqi Books, who acquired rights from Abner Stein in association with the Deborah Harris Agency, said 'Native is a wickedly sardonic, moving and hugely entertaining collection that offers real insight into the lived experiences of Palestinians in Israel.'" This is so true.

If you are Palestinian or Israeli, Jewish, Muslim or Christian, or simply human, you will enjoy these short stories tremendously. If you are none of the above, then just buy the book and place it on your bookshelf for all to note in awe the powerful one word title, Native, which says it all!

~ Sam Bahour is a policy adviser to Al-Shabaka, the Palestinian Policy Network; Chairman of Americans for a Vibrant Palestinian Economy; and Co-editor of HOMELAND: Oral History of Palestine and Palestinians (Olive Branch Press). He writes at www.epalestine.com.