Last night in Berlin, we celebrated the 7th birthday of Matilda Foelsch. A multi-ethnic, multi-cultural gathering of Matilda's friends partook of Kasekuchen (cheesecake), Waldmeister (green lemonade), tasty satay sticks, and vegetarian sushi (no wasabi) at the Pankow home of Frank Foelsch and Cathleen Eberhardt. The rambunctious all-female celebrants raced around the apartment with carefree abandon, raptly watched the Little Mermaid Part Two in Deutsch via a DVD player connected to a late 80s Orion TV, and occasionally peaked in on the odd-speaking foreigner deliberately cloistered in the guest room in order to keep his large, loud American presence from sucking all the oxygen out of the Friday-the-13th-themed festivities. 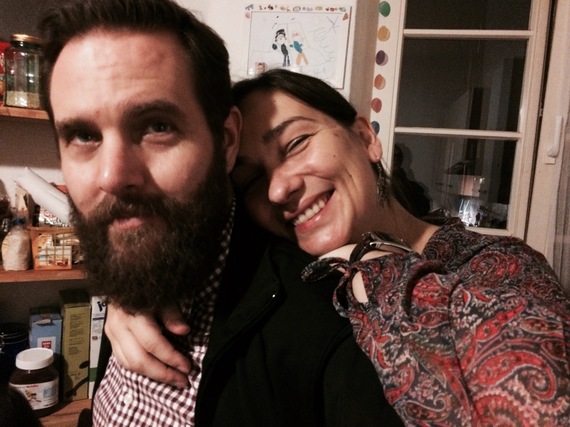 Earlier in the day, the foreigner spent five and half hours teaching policy debate to reticent German college students at the Mediadesign Hochschule in quickly-gentrifying Kreuzberg. These students were no different from any American college student of this era. They not only had never seen American film classics like Wizard of Oz, Citizen Kane or Gone with the Wind, but they were also ignorant of German classics from the likes of Herzog, Fassbinder and Wenders. Moreover, they did not take notes, much to my old school chagrin.

However, they did come away knowing that their carefully cultivated assumptions about Americans (that we are a linguistically challenged and globally ignorant class of boors) do not hold up under rigorous cross-examination. I hope that they will use the principles of alternate causality, correlation versus causality, and deep methodological inquiry that I modeled for them to explode other prejudices they might posses.

I went to bed exhausted from the teaching and from the birthday fun, yet woke up refreshed.

Then I was hit with the tragic news out of Paris. 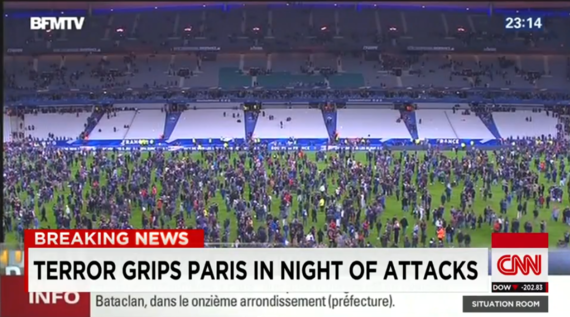 I have to admit, my first reaction was not sadness, shock or horror. In all honesty, I took it for granted. I guess that's how cynical (or detached) I've become, living in my L.A. bubble, far from the front lines of terror, not to mention the Syrian refugee crisis here in Europe. Nothing was going to disturb my upbeat outlook.

Then, alone, away from the good family Foelsch, I started to well up with tears. It was just too much.

Here I was in a country that was trying so much harder than any other country in the world to be good global citizens by welcoming the Syrian, Libyan and East African stranger. Here was a country that had worked diligently for decades to undo the ghastly karma of its recent past by going over and above what any other nation in the world was doing by letting Muslims into their hearts, homes, and communities. And thereby modeling a compassionate approach that made the rest of Europe look grotesquely insensitive by comparison.

And now another homegrown European attack.

I could see the sadness in the faces of my German hosts. And then the quick realization that there is no easy fix to the problem of radical Islamic terror. Anyone who says there is, especially any candidate running for elective office, is a charlatan. Because all of us, if we look deep enough, know that no single approach is going to get the job done.

I usually do not take comfort in anything a Socialist says, but French President Francoise Hollande was spot on when he said today that we must "keep our cool." We Americans, in particular, certainly did not keep our cool after 9/11, letting our immature, tragically misguided leaders take us into a disastrous, large-footprint war in Iraq, which so destabilized large swaths of the Middle East that more virulent strains of radical jihad were allowed to blossom. Though I strongly warned against the Iraq invasion from the get-go, as an American I still have to own that decision.

Moreover, if I am to walk my cautious talk from 2001, I must warn us again not to let our baser instincts win out. The answer to the 1300-year-long history of Islamic jihad is not to wantonly massacre more Muslims. Nor does it reside in putting a large contingent of U.S. soldiers on Mideast soil. This time around, we must be smarter, wiser, and far more strategic.

We need three types of armies. The first army will be the one President Obama is slowly putting together right now. A small, but lethal, cadre of Special Forces able to neutralize the leaders of the jihadist movement, in cooperation with regional allies that we can depend upon (namely the Kurdish forces of Northern Iraq). Our recent killing of the abominable Jihad John is a step in the right direction.

As I have said since 2001 - to mostly deaf ears - the right military approach to Islamic terror is a quiet war. Not massive boots on the ground, where our location is clear to the enemy, but a war that deftly uses the element of surprise to take out jihadists in the very redoubts where they feel most secure.

ISIS is like the Mafia. The way to defeat it is to create fear within the ranks, so that members start ratting each other out, or grow so paranoid about when the next surprise attack is going to come that they abandon the fight.

We must, for the love of God, Buddha, Allah and all the rest, stop declaring our intentions, our strategies, and our location in advance. Moreover, we must accept that we are not going to defeat the impulse towards Jihad in this lifetime. We have to accept that for tens of millions of hard-core Jihadists around the world the Islamic war against Christian Crusaders never ended.

We in the West blithely think it did, but they do not. Therefore, we need to stop pretending that with enough bombs we can end their reign of terror. We can only hope that over long stretches of time, and with the right deterrent strategy, it will fade into oblivion.

However, this result will never happen without a second army: a political one. We in the U.S. and Europe must grasp the pressing need to drain the Mideast swamp of ISIS support. We can do this by immediately implementing a man-on-the-moon effort towards complete independence from Mideast oil and gas by 2025. It can be done, if we have the will. Genuine energy independence will make us no longer beholden to the likes of Iran, Saudi Arabia, and Kuwait (all three of whom are major financiers of global jihad).

In addition, we have to stop being so naïve about those traveling between our countries and Syria, Iraq and Libya. Right now there is no good reason for anyone to be traveling to these areas unless they are part of some military, political or humanitarian effort. The French government, in particular, needs to get this.

We also must implement stronger border controls, so we know who is precisely coming in and out of our respective countries. I know that this might temporarily put to rest the European ideal of open and free travel between member states. However, it's sheer madness to assume that ISIS is not actively taking advantage of such willful naiveté.

As technology and globalization (and the increasing tolerance that comes with both) advance around the world, expect more violent reactions to these disruptive forces from those who see them as a threat to their traditional mores. A fearful person clings desperately to the past when the threat of change becomes too much to internalize. This is happening all over the Mideast, as well as in parts of Europe, Africa and Asia. And it is only going to get worse before it gets better. We need to hold steady, proceed deliberately and systematically, in a quiet forthright manner, until the current threat implodes from within.

But we must also do a final thing. We must build within our hearts, our neighborhoods and our homes a love army that compassionately conquers the enablers of Jihad: the moderate Muslim fathers and mothers, whose sons and daughters are blowing themselves up in service to some perverse and violent ideal. Moderate Muslims are the true front lines in this battle. And they need to be welcomed into our modern world, and helped in moderating the impulses of their young charges. 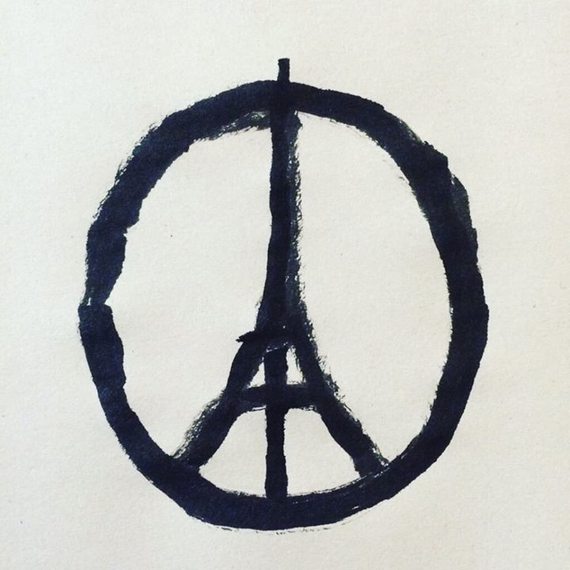 This is our ultimate hope: that the transition to modernity is made easier and less violent. We can help this process along by tossing love bombs against bigotry.

Though there will certainly be more attacks like occurred last night in Paris, slowly but surely the arc of history will bend towards peace, democracy, and tolerance. On that head, as the Berlin philosopher Georg Wilhelm Fredreich Hegel so eloquently noted, we should have no doubt.