Let's play a game: imagine that you were going to join a research study, and were allowed to join one of two groups:

Group #1 was going to go on a conventional diet.
Group #2 was going to learn how to trust themselves around food and like their bodies.

Which one would you choose? And what would you expect your outcome to be, two years from now? 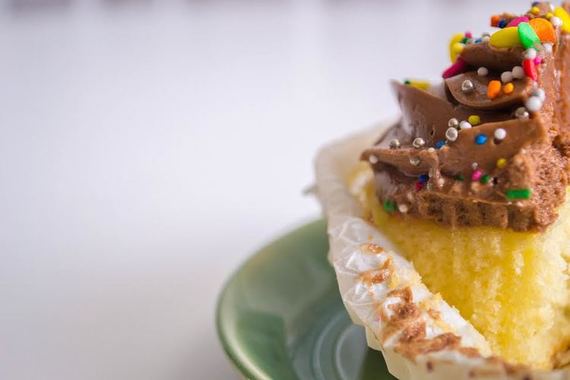 Lucky for us, this peer-reviewed academic study was actually conducted, and its results were published in the Journal of the American Dietary Association.

Seventy-eight women, who were at least a size 16, were assigned randomly to either the conventional dieting or the non-dieting group.

The dieting group received education about nutrition and learned "how to count fat grams, understand food labels, and shop for food." They were encouraged to moderately restrict their intake, keep a food diary, and lose weight slowly. They were also encouraged to exercise.

The non-dieting group learned what was called the Health At Every Size (HAES) curriculum, in which they were encouraged to befriend their bodies, to move their bodies because it feels good, and to eat for health and for pleasure, without worrying about weight loss. Dr. Linda Bacon writes more about the HAES in her wonderful book, which is definitely worth the read.

If this upsets you ("how can it be that neither group lost weight? I just want to lose weight!"), I hear you. Stay tuned.

Health. The non-dieters showed significant declines in "so-called 'bad' LDL cholesterol and blood pressure. They also significantly increased their activity level. At the end of year two, these same metrics stayed the same or worsened in the dieting group.

Happiness. Women in the non-dieting group had significant decreases in depression and increases in self-esteem, while the opposite was true in the dieting group.

Showing Up. It's also worth noting that almost half of the dieters dropped out of the study, compared to only 8% of the non-dieting group. Which makes sense--I mean, how long do you want to stay on a diet?

And yes, if the only thing you are thinking is: "what? NONE of the groups lost weight?" I hear you.

But here's the thing: for most people, conventional dieting just does not work in the long run. In fact, for many people dieting can lead to weight gain as your body over-reacts to what it perceives as starvation.

It's okay if you don't like this reality. Most people don't, so they just figure that they'll go on another diet -- because for them, this time, it will work. And yet: most of my clients have been on many of them, and come to me once they are completely exhausted and frustrated. They've spent the last few months or few decades alternating being on diets and eating way too much.

So, if you may or may not lose weight anyway, how would you like to spend the next two years?

I know that it can be frustrating to read this kind of research--messages from "research studies" can be confusing and seem to support everything. So I wanted to share a bit more about the researchers on this study.

In fact, Bacon teamed up with Dr. Judith Stern, a distinguished professor in the departments of nutrition and internal medicine at UC Davis, who has an impressive resume and, as Bacon writes in her book, "I knew she believed strongly in dieting and weight loss and would supervise the study carefully to ensure fair testing of the conventional model."

In fact, Dr. Stern believed so strongly in the dieting and weight loss model that she was afraid that even conducting this study might be unethical: Dr. Stern was concerned that "if we didn't encourage the women in our study to lose weight, we might be harming them."

Dr. Stern was so skeptical of the non-dieting program that she required that the researcher's test the women's progress after three months, including surveys, blood samples, and weight. If they saw that in any way the women's information was getting worse, they had to stop the study immediately.

So you can certainly say that the study was balanced.

Obviously, everyone needs to choose her own path. Though I have found setting aside dieting "rules" to be useful, I don't think that it is a requirement for a happy life.

Here's the question I have for you, no matter what path you are considering going down in terms of eating, weight, and happiness: Where do you want to be, two years from now? And what is going to help you get there?

I'd love to hear the answers from you, in the comments below.

Katie spent years "planning" her eating and being frustrated with herself when she ruined her plans by eating too much. She eventually discovered how to trust herself around food -- read more about her story here, or get her free ebook with actionable tips that you can try right away.