At the height of the euro crisis in 2012, it took the now-famous promise of European Central Bank (ECB) President Mario Draghi to do "whatever it takes to preserve the euro" to calm eurozone (EZ) government bond markets. While his words were effective at beginning to bring down borrowing costs in the euro area, he must now act decisively on those words if the euro truly is to be preserved and the EZ is to escape its current economic malaise. Granted, the ECB has expanded its capabilities in recent years. Last year, following the use of the strategy in the US and UK as a response to the global financial crisis, the ECB began its turn at quantitative easing (QE). In March of this year, that program was expanded to a purchase size of €80 billion per month and to include investment-grade corporate bonds.

For the ECB to preserve the euro, however, it must eliminate redenomination risk (the risk that a country might be forced to leave the euro--a risk that engulfed Greece last summer) and it must prove that it possesses an equal or greater level of effectiveness at boosting the economies of each EZ nation relative to the effectiveness national central banks would (did) have in the absence of the monetary union. To accomplish these goals, the ECB will need to expand its purchases to encompass more of the risk curve.

As EZ countries have undergone tremendous fiscal stress since the onset of the crisis due to increased debt loads and refinancing risks, and as borrowing rates across a country's economy are set based on some spread over the government's borrowing rate, the ECB has set out to lower EZ government borrowing rates via its QE purchases. However, such purchases are only conducted in a given country if the country's first-best credit rating is "investment grade" (BBB- and above on Standard & Poor's scale). This rule ignores the fact that one of the key transmission mechanisms of QE policies to the general credit conditions of the real economy is a moderation of risk spreads during market panics. This issue is especially pertinent for Portugal. While three of the four main rating agencies have Portugal's debt rated below investment grade, rating agency DBRS has Portugal rated on the lowest possible investment grade notch; therefore, the ECB is able to continue its purchases of Portuguese debt. However, DBRS is due to revisit Portugal's rating Friday. Thus, despite the ECB's massive purchase program, borrowing rates in Portugal have continued to inch up as political risks have left investors fearing a potential downgrade (Figure 1).

Figure 1 - While Eurozone sovereign borrowing costs (white) have steadily decreased over recent months, Portugal's (green) have risen as investors are unsure if ECB support will continue.

By only allowing for investment grade purchases, the ECB has left open the possibility that its support of credit conditions in Portugal could cease precisely when it is needed most--and precisely when a typical national central bank would step up its actions to ease financial conditions. The retrenchment of ECB purchases combined with the downgrade could send Portugal into a negative equilibrium in which it is unable to issue or refinance its debt at reasonable interest rates--or at all. Redenomination risk would be reintroduced in the eurozone as concern grows that the country may exit the single currency.

Secondly, if the ECB is to boost the economic recovery, it has to solve Europe's safe asset disequilibrium. Europe is facing problems on both sides of the safe asset market: supply of safe assets has been drastically reduced in the aftermath of the crisis while safe asset demand has increased. This dynamic means the equilibrium interest rate is significantly lower than in the past (see Figure 2 for a rough example) and the ECB's set of policy rates--trapped at their lower bound--are less stimulative than they would have been historically. 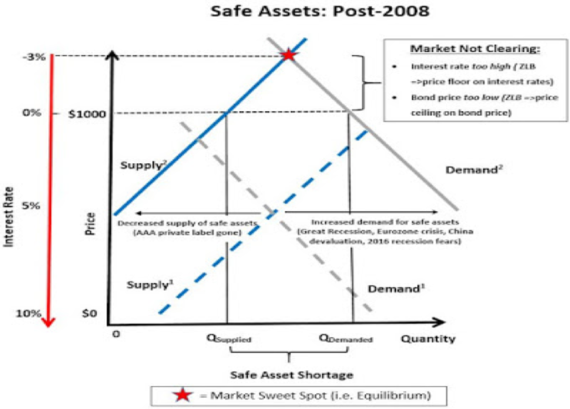 Figure 2 - Graphic demonstration of the shifts in the safe asset market since the global financial crisis. Courtesy of David Beckworth's blog: Macro and Other Market Musings.

To combat the excess demand for safe, government assets and attempt to push lending into the real economy, the ECB has pushed its deposit rate slightly below zero and its policy rate to zero. However, given that the ECB has limited itself to purchasing assets only of high credit quality, ECB credibility and commitment to act further if needed, perversely, can reduce the equilibrating interest rate on safe assets further. Every time the ECB promises to act further if its current QE program is insufficient to bring the EZ into a complete recovery, demand for safe assets grows as investors envision a potential capital gain if the ECB starts purchasing an even greater amount of highly-rated bonds per month. Thus, the safe asset market will require yields to fall even further to clear the market as investors of safe assets will also get the return of the increase in prices on those assets. However, if the ECB would expand its arsenal to include purchases of risk assets, the ECB's commitments to act further if necessary would encourage investors to shift their lending to riskier assets and the real economy.

Thirdly, if the ECB is to be a true lender of last resort to the euro area, purchasing risk assets is the functional equivalent of a standard central bank purchasing safe assets. That is, if the central bank wants to create a reduction in risk aversion and safe asset demand amongst lenders, banks must believe that the central bank will provide a liquidity backstop against riskier assets in the event of a market downturn. However, much like the rules for its purchases of sovereign bonds, the ECB's policies for liquidity provision are very procyclical. At the height of Europe's sovereign debt crisis, instead of functioning as a true lender of last resort for banks, it behaved as any other lender would and made increasingly more margin calls as the value of banks' collateral--risky periphery country debt--was falling. This exacerbated the crisis and pushed many banks onto emergency liquidity assistance (ELA) which could be arbitrarily cut off by the ECB and carried tremendous publicity and stigma. This experience, combined with banks' awareness of significantly lower probabilities of being bailed out under Europe's new bank resolution rules, has left banks understandably hesitant to move back into risk assets. This differs from the Federal Reserve's crisis response of availing liquidity against risky mortgage-backed assets on an anonymous basis. If the ECB's liquidity provisions remain procyclical, the ECB must become a buyer itself in risk asset markets to limit market panics and widening risk spreads that lead to margin calls on banks' collateral.

Lastly, the purchase of riskier assets could provide a direct boost to EZ bank lending--specifically, through the purchase of riskier tranches of asset-backed securities (ABS). While the ECB does include ABS in its asset purchase program, its minimal level of purchases thus far have done little to revive the market rocked by the stigma of its role in the financial crisis (Figure 3). 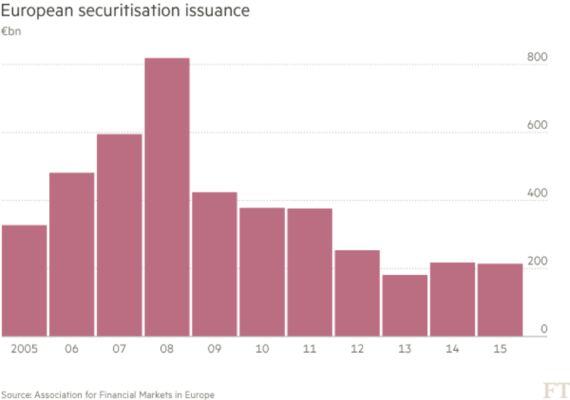 Figure 3 - Securitization issuance in Europe has failed to rebound in the aftermath of the financial crisis.

Consistent with their purchases of other assets, the ECB only purchases the safest ABS tranches unless the riskier tranches are guaranteed by European finance ministries. Given that few EZ countries have the fiscal capacity to provide such guarantees (and many that do don't want to), ABS purchases have been unsurprisingly marginal. While U.S. banks were forced to write off bad loans and received capital injections in the immediate aftermath of the crisis, European lenders remain crushed under the weight of legacy non-performing loans (NPLs) (Figure 4). 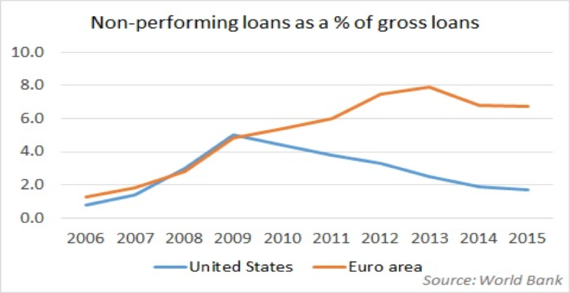 If these loans were removed from lenders' books, significant capital would be freed up--creating financial stability for banks and encouraging new loans. However, given the safety of the highest rated tranches, the ECB's current purchases do not provide meaningful capital-requirement relief for banks. By expanding purchases to include riskier securitizations, the ECB will help prevent financial market turmoil as a result of concerns about the capital adequacy of banks--which could then represent massive contingent liabilities for national governments, reducing the credibility of the euro area's still-developing "no bailout" rules and causing fiscal stress for sovereigns (Figure 5).

Further, it is typically these riskier tranches that would include loans to small- and medium-sized enterprises which usually do not have access to other forms of funding such as the corporate bond market. Purchasing riskier securitized loans (both non-performing and not) would thus encourage greater lending to these vital businesses in the real economy. Additionally, if the NPL purchases have the desired economic stimulus effects, they would also boost the underlying value of the purchased NPLs and contribute to ECB profits (which are remitted to national governments) as occurred with Federal Reserve purchases of mortgage-backed securities. Even if ABS purchases were to create a loss, the loss would be unlikely to offset the gain from the ECB's other purchase programs. Notably, even in a worst-case scenario, the ECB could continue to operate with negative equity; therefore, it need not receive a guarantee from national treasuries that can't operate if they go broke.

President Draghi promised to do whatever it takes to preserve the euro. If the ECB is to provide economic assistance to the eurozone as effectively as national central banks would be able to and is to eliminate the risk of a country exiting the union, risks are "whatever it takes."