The World Health Organization has dubbed hepatitis C, which infects as many as 185 million people worldwide, a "viral time bomb." On this World Hepatitis Day, July 28, it is important to know that this "bomb" can be defused if we can get companies to lower the price of treatment.

Unlike cancer or HIV, hepatitis C is curable in the majority of cases. Unfortunately, cure has been hampered by the fact that the bulk of people living with hepatitis C reside in low- and middle-income countries where the main medicine used in the current standard of care -- Pegylated Interferon-alfa (Peg-IFN) -- is priced out of reach. Two pharmaceutical giants -- Roche and Merck -- sell all of the brand-name Peg-IFN around the world. This duopoly allows the companies to charge exorbitant prices. Even in countries where patients have to pay for treatment out of their own pockets, the cost of hepatitis C treatment can be as high as $18,000 USD for a course of treatment. For too many, this is a price tag that means death.

We know these medicines need not be so expensive. As the table below shows, these companies agree to sell the same medicines at vastly different prices from country to country, with no apparent logic. And, it is widely known that the costs of manufacturing represent only a fraction of this high price tag, with the remainder, often over 90 percent, being profit. 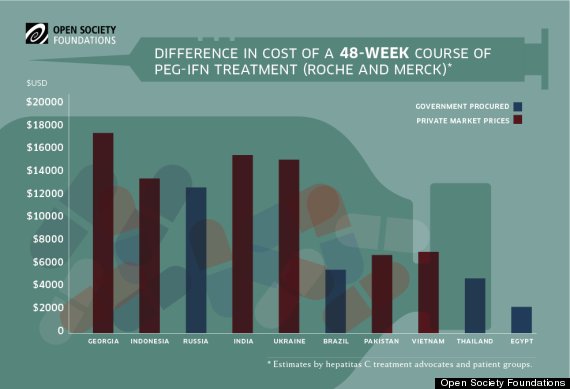 In some countries, breakthroughs in price reduction have been made. In Egypt, for example, where there is a large hepatitis C epidemic, and a locally-produced competitor to the brand-name medicines, the government was able to secure treatment made by Merck and Roche at less than $2,000 for a 48-week course of treatment. The drop in price allowed the government to treat approximately 220,000 people under its national program.

And, in Thailand, the government was able to commit to cover hepatitis C treatment under its universal health care program after negotiating a four-fold reduction in price for Peg-IFN by Roche and Merck to $4,800 USD for a 48-week course of treatment.

Inspired by the examples of Egypt and Thailand, governments and activists in other low- and middle-income countries, like Georgia and Ukraine, are starting to ask for reduced prices to effectively address their national epidemics. To mark World Hepatitis Day this year, activists protested the high price of hepatitis C treatment at rallies in Russia, Armenia, Georgia, Ukraine, and Latvia. And in Asia, groups are preparing to ask Merck and Roche to drop the price to $1,000 USD a year.

We know that political commitment and community mobilization can make the difference. For those who say that treatment is too complicated or that pharmaceutical companies will always prioritize profit over people, we should say: we've been here before. More than a decade ago, HIV/AIDS patients marched the streets ofSouth Africa, Thailand, and Brazil demanding affordable access to medicines that could save their lives, and with success. Since then, the cost of AIDS drugs dropped from over $10,000 per person per year to less than $100 today, enabling millions to access treatment.

So, this World Hepatitis Day, we stand in solidarity with civil society groups in low- and middle-income countries, and their governments as they mobilize in the fight for access to hepatitis C treatment. Affordable access to life-saving medicines is a human right, and only when governments and pharmaceutical companies commit to making treatment available at fair prices, will we close the hepatitis C treatment gap. If these companies continue to put profits before people, the hepatitis C epidemic will surge, and many more will unnecessarily die.