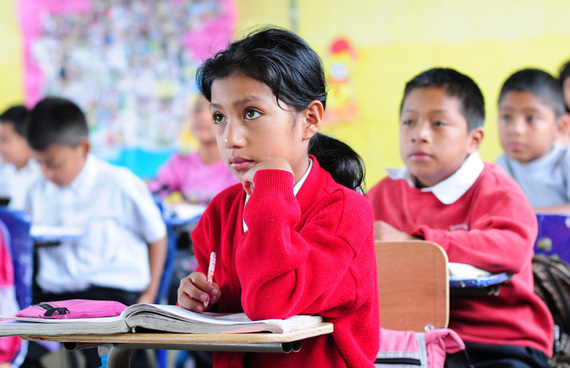 Women make up almost half the world's labor force and perform most of its unpaid care work, for children, the elderly, and the disabled. They also earn less and own less than men—especially land and housing. And they face enormous constraints in the world of work—from laws that prevent them from opening bank accounts to social norms that push them into lower-paying, less secure jobs.

As a result women are more vulnerable to poverty than men.

Removing the constraints that hold women and girls back and unleashing their productive potential is now widely recognized as a game-changer in tackling poverty. When women and girls are educated, empowered, and able to access key assets—land titles or lines of credit, for example, so they can buy fertilizer or start a business—everyone is better off.

This is why the World Bank has strengthened gender equality as a corporate priority, and why we are embedding it as a goal in every project we undertake. We know we cannot achieve our twin goals of ending poverty and boosting shared prosperity without ending poverty and creating equality for women and girls.

We cannot alleviate poverty without properly diagnosing its causes. For this, we need better data and evidence, and a lot of it. Right now, this data often simply doesn't exist, particularly when it comes to women and girls, making it difficult to estimate the cost and consequence of poverty and inequality.

The difference between the wages of men and women, by occupation and industry, is often not available, as is data on job segregation, and the number of businesses owned by women. Until we know how many women own businesses, we may under-invest in them as entrepreneurs and economic drivers.

How many hours a week do women and men spend performing unpaid care work?

How many girls are married before the age of 18? Why? Knowing what stresses and circumstances drive an uptick in child marriage might inform more effective interventions to prevent it.

And until we have accurate data about women's health too, we may design programs that are destined to fail or simply fail to deliver what might have been a transformational impact.

The World Bank Group, along with many of our partners, is focused more intently now on finding and filling these data gaps. We are working with Data2X, UN agencies, and others to address some of these knowledge black holes.

But it is not just data. Sometimes our definitions fall short. Take, for example, the way we view income and labor. It simply doesn't cover enough of the work that women, and in particular poor women, are doing—especially in their own households and the vast "informal" economy in which most of the world's poorest people work.

We are working to implement new international definitions of work and employment that recognize all productive activities, paid and unpaid, as work. They also introduce the concept of "own-use production work," which includes goods and services women provide for a household, such as a meal.

Measuring better and fully what women actually do will give us a more complete picture of the work they perform—and how it advances economies, livelihoods, and wellbeing.

Along with the World Health Organization, we have developed an ambitious plan to scale up collection and registration of vital statistics, such as births, deaths, and marriages. And with support from partners, we will be housing a new Global Financing Facility for the Every Woman Every Child initiative.

The data they collect will expand the ability of women and girls to own or inherit property, avoid early or forced marriage, and access vital health services.

The Millennium Development Goals drove global leaders to focus on development data and targets as never before—shining a spotlight in the process on everything we didn't know, didn't measure, or hadn't thought to count.

As we close in on new targets to succeed the Millennium Development Goals next year, we have a much better idea what data on women and girls we need so we can design evidence-based policies that influence values and norms that are currently limit opportunities for girls and women. With this we will reach the finish line faster—and end extreme poverty once and for all.

As Chief Operating Officer and Managing Director, Sri Mulyani Indrawati is responsible for the World Bank Group's operations in all regions, its 14 global practices and five cross-cutting solution areas. Ms. Indrawati joined the World Bank in June 2010. Previously she served as Indonesia's minister of finance in addition to being the coordinating minister of economic affairs.