Corruption and poverty unfortunately go hand-in-hand, threatening the lives of too many people. In countries where people are forced to bribe to get essential services like health and water the toll can be horrifying. Eight times more women die having children in places where more than 60 per cent of people report paying bribes, compared to countries where bribery rates are less than 30 per cent.

That's 482 women dying for every 100,000 births in more corrupt countries, compared to 57 deaths where bribery is less. The rate goes down to less than 10 deaths per 100,000 in many developed countries.

The effects of corruption are personal and they are devastating. Corruption leaves children without mothers, families without healthcare, people without food, the elderly without security, and businesses without capital.

That is why on December 9, the tenth anniversary of International Anti-Corruption Day, we need to make sure that the message is sounded loud and clear: you can't beat poverty if you don't stop corruption.

When corruption is held in check, however, there is a measurable development dividend. Our research at Transparency International, the global anti-corruption movement, shows that less bribery means less maternal mortality, better literacy among young people and better access to sanitation. 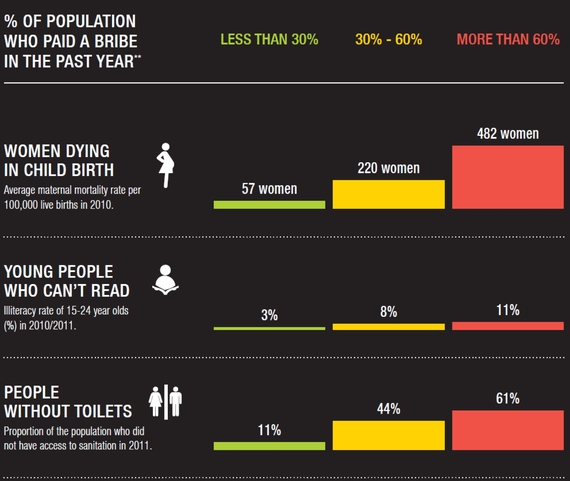 In the next year, the members of the United Nations will be prioritising a development agenda post 2015, building on the set of eight Millennium Development Goals established in 2000. Governance and corruption must be made a cornerstone of policies that target education, poverty, health, water and other development issues.

We strongly believe that introducing a "governance goal" that can be tracked and that allows citizens to hold their governments to account is a prerequisite for ending poverty in all countries. For example, corruption is now estimated to increase the cost of achieving the UN Millennium Development Goal on water and sanitation by $48 billion. This should not and need not be the case.

Within the framework of a governance goal, targets should be set for increasing the participation of people in decision making, making public spending and budgets more transparent, and making law enforcers and public services answerable to ordinary people.

Part of this would be a requirement for governments to publish key data on spending. Simply getting the information out there would be a good first step. Today only a fifth of the 49 lesser developed countries have access to information laws.

2.5 billion people still live in poverty. This is not sustainable. By 2030 the population will reach 8.5 billion. This is a global issue: no country is without poor people or without corruption. In the latest Transparency International Corruption Perceptions Index that measures how corrupt the public sector is perceived to be, two-thirds of the 177 countries ranked scored less than 50 on a scale where 100 is considered clean. The average score of the world's least developed countries is 28.

The world cannot turn a blind eye to the corruption that keeps people poor. The sad death of Nelson Mandela, a man recognized around the world for his values of inclusiveness, hope and the centrality of human dignity, reminds us that improving the lot of all people should always be at the center of our work. Now more than ever before, as we enter the next phase of the drive to eradicate extreme poverty, we must have the will to put an end to corruption.