On May 26, 2016, researchers at the Walter Reed National Military Medical Center reported the first case of what they called a "truly pan-drug resistant bacteria." By now, the story has been well-covered in the media: a month earlier, a 49-year-old woman walked into a clinic in Pennsylvania with what seemed to be a urinary tract infection. But tests revealed something far scarier -- both for her and public health officials. The strain of E. Coli that infiltrated her body has a gene that makes it bulletproof to colistin, the so-called last resort antibiotic.

Most have pinned the blame for the impending doom of a "post-antibiotic world" on the overuse of antibiotics and a lack of new ones in the development pipeline. But there's another superbug incubator that hasn't gotten the attention it deserves: poverty.

Last month at the IMF meeting in Washington, D.C., UK Chancellor George Osborne warned about the potentially devastating human and economic cost of antimicrobial resistance. He called for "the world's governments and industry leaders to work together in radical new ways." But Gerry Bloom, a physician and economist at the Institute for Development Studies, argued that any measures to stop overuse and concoct new drugs must be "complemented by investments in measures to ensure universal access to effective antibiotic treatment of common infections."

"In many countries, poor people obtain these drugs in unregulated markets," Bloom said. "They often take a partial course and the products may be sub-standard. This increases the risk of resistance."

For at least fifteen years, we've known about these socioeconomic origins of antimicrobial resistance. Other studies have revealed problems with mislabeled or expired or counterfeit drugs. But the clearest link between poverty and the rise of antimicrobial resistance is that poor people may not see a qualified health care provider or complete a course of quality antibiotics. Instead, they might turn to unregulated markets for substandard drugs. 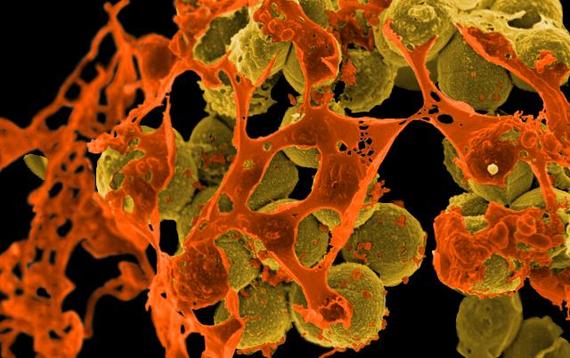 But why do people resort to unregulated markets or take drugs that aren't that great if they are available? Marcella Alsan, an assistant professor of medicine at the Stanford School of Medicine who studies the relationship between socioeconomic disparities and infectious diseases, led a study that answered this question. In last October's Lancet Infectious Diseases, Alsan and her colleagues showed that it might have a lot to do with requiring copayments in the public sector. To show this, they analyzed the WHO's 2014 Antibacterial Resistance Global Surveillance report with an eye toward the usual suspects, such as antibiotic consumption and antibiotic-flooded livestock.

"We found that out of pocket payments were the most significant correlate of antimicrobial resistance across countries," Alsan told me. "But when we looked more deeply into the data, we found that that entire correlation was driven by countries that had in place a policy by which copayments were imposed in the public sector."

That means some of the poorest of the poor need to fork over a copayment anytime they want to receive antibiotics from a public sector provider. That gives us a pretty good idea of why someone might decide to use the "unregulated market" or why they might only complete part of their treatment and save the rest of their antibiotics for a family member or the next time they're sick.

"If you think about a model in which there's two sectors to obtain health care, there's a private sector and a public sector. It's sort of like you have Coke and Pepsi. If you start taxing Pepsi, then people are probably going to drink Coke," she continued.

Rather than shame individuals for taking antibiotics incorrectly, we need to understand how poverty constrains their options. "We presume a lot sitting really far away from some of the populations that are most heavily afflicted," she said. "What would be the alternative medical care that people could obtain if we shut down informal provision? How would people afford antibiotics if we required copayments everywhere?"

"Antimicrobial resistance is not unique," Alsan added. "It is just another manifestation of underinvestment in basic public health infrastructure."

Writing a book on empathy for Simon & Schuster and an Instructor at the Harvard T.H. Chan School of Public Health.