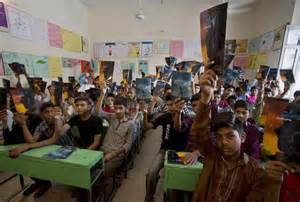 With the United States' presidential election over and the transition to a new administration underway, leaders on both sides of the aisle now have the opportunity to renew their focus on a truly bipartisan issue: reducing acts of violence and terror perpetrated by young people in the U.S. and abroad.

Reflecting on the past six months, whether one thinks first of bombs in New York, an ISIS suicide blast in Baghdad, or the truck attack in Berlin and Nice, political candidates and talking heads continue to narrow their discussion of terrorism to questions of ideology and ethnicity, and overlook the critical component of age. Today, youth aged 30 and under-represent over half of the world's population -- a greater number than ever before -- and the vast majority of them are concentrated in developing countries.

Two areas of concern tend to arise in discussions around this trend, the so-called "youth bulge." First, we've seen cases of Western societies failing to integrate the foreign-born and their children; and second, we've seen how sluggish economies often cannot provide meaningful employment for this growing segment of the population. Both trends can leave youth feeling alienated, without skills and networks to productively contribute to society. At this stage, some youth seek agency and connection through unproductive or even destructive outlets -- in the worst cases, they are swept up in radical movements that address their need for a purpose.

The challenges are interwoven and messy. So what can we do to prevent youth from being driven to violence as a means of expression?

I agree with progressive legislators that we need to provide youth with employment, skills, and entrepreneurship training. But for young people to be productive citizens, creators, and problem solvers, they also need meaningful opportunities to express their opinions and pursue their own ideas around social change.

In short, we need to give youth a place at the table. When youth gain a voice, good things happen. The conversation around youth voice isn't just a conversation about violent extremism or misinterpreted religious ideology, either -- it's a larger conversation that requires connecting dots across both contexts and countries.

I have seen the power of youth voice firsthand -- as a child I watched my dad mentor troubled kids and even take them along on our family vacations. In my teens, I started the Calcutta Youth Club to get youth involved in civic projects. On both occasions, youth transformed when they were allowed to express and act on their ideas.

I saw similar results as President of SNV USA, which worked in more than 30 countries; I will never forget the story of a young Tunisian woman who resisted heavy recruitment by extremist organizations by reaching out to several civil society organizations for support -- today, she is an entrepreneur.

My experience is not an aberration, however -- we see this trend around the world. Rivera Hernandez in Honduras, for example, had the highest homicide rate in the country three years ago. Today, the neighborhood's story is very different. Pulitzer Prize-winning author Sonia Nazario visited the neighborhood this summer and wrote in the New York Times about the dramatic decrease in violence, noting that programs funded by the U.S. are partially responsible. Investments helped fund programs to productively engage youth in the community, through neighborhood outreach centers with mentorship and training, and more active events such as movie nights and soccer matches. Similar programs have been successful in the U.S. -- in Philadelphia, the U.S. States Attorney's Office recently started supplementing enforcement tactics with a filmmaking program called "Voices of Youth," which provides inner city youth who've experienced violence with expressive techniques through narratives and film. The program aimed to give youth a positive creative outlet and voice in their communities, while also fostering strong relationships between them and authority figures such as police and their parents. The post-program results have been promising -- simply by being treated like they have power to effect change in their communities and help reduce violence, they have done exactly that. All around the world -- including in the Middle East -- we hear similar stories. To make these examples more commonplace, and tragic headlines more rare, I am working with partners to launch a new collective action initiative called Youth Resound (formerly the Global Youth Initiative), which seeks to amplify the voice of youth as a means to solve some of the world's toughest challenges. The effort will elevate and create positive outlets for youth voices so youth can drive their own bottom-up solutions to the disempowerment they face -- be it economic, political, or social. But we need others to get involved, too. In the U.S., empowering youth voice is something both Democrat and Republican policymakers can get behind. And while governments and multilateral and bilateral organizations have a primary responsibility, it is absolutely critical too that foundations and corporations play a major role. Foundations can pursue an intentional vision for supporting youth who are not already involved in education, employment, or training -- instead of simply assuming they will be supported through child or adult interventions, as is often the case. Corporations too can reap both social and economic benefits by investing in potentially disenfranchised youth -- whether as employees, consumers, or elsewhere along their operations. It's not easy, but in the face of the convergent trends of the youth bulge, and pervasive unemployment and community violence worldwide, we have the power -- and the responsibility -- to empower youth as catalysts for social change, rather than drivers of global conflict.