In Montana, we take our history seriously and when others try to spout off in recounting it, all we ask is that they be accurate. A big part of our recent past was shaped by the outcome of armed conflict between our ancestors largely of European lineage and Native Americans.

On June 26, 1876, one of the near-mythic events in U.S. history occurred along the banks of a river east of where I am now writing. It was an early summer afternoon. Hundreds upon hundreds of families were camped along groves of cottonwood trees flanking the watercourse to stay out of the hot sun.

Exhausted from skirmishes and being on the run, members of the Lakota (Sioux) and Northern Cheyenne tribes converged to try and find a little relief from relentless hounding by the United States Cavalry. The government had branded them "hostiles" and wanted to get them confined to the equivalent of 19th century concentration camps. 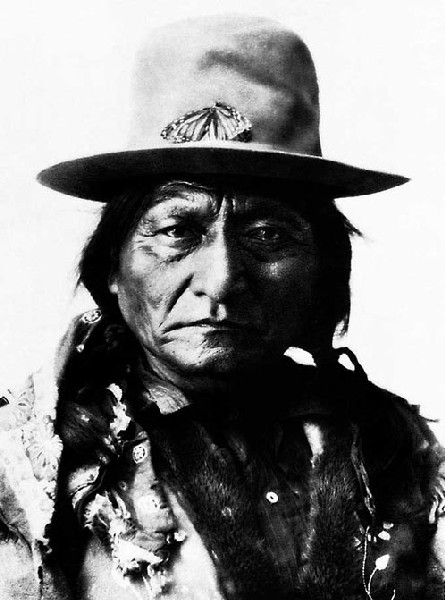 So imagine that you are a mother or a father and your children are along the Little Bighorn River playing in the water. You don't know exactly where they are, but you see a unit of blue-coated attackers on horseback charging out of the hills above and they are firing rifles. You know from previous engagements that the result holds the potential for being horribly bad.
Adults in the camp instinctively rally together and meet the aggressors who discover quickly that there are more Lakota and Northern Cheyenne than they bargained for when their leader, George Armstrong Custer, decided to launch a surprise attack.

The longhaired officer knew that with a quick and bloody triumph, promotion and popular acclaim back East would be virtually guaranteed. That day, Custer and 262 other members of the 7th Cavalry were swarmed and defeated by angry warriors who were fighting for their survival. Among them was Sitting Bull, a spiritual leader who is mentioned in Barack Obama's new children's book, Of Thee I Sing: A Letter To My Daughters that calls attention to those who lived in this country and are worth honoring.

Sitting Bull reportedly had a vision that such a battle like the Little Bighorn would happen and this time, Indians would prevail. The President described him this way:

(Sitting Bull) was a medicine man who healed broken hearts and broken promises. It is fine that we are different. (He) spoke out and led his people against many policies of the United States government. He is most famous for his stunning victory in 1876 over Lieutenant Colonel George Armstrong Custer in the Battle of the Little Bighorn.

Fox News panned the President's book, the proceeds of which are going to fund scholarships for the children of those serving in the military, with this headline:

Wrong on at least three counts: Custer wasn't a "general"; there is no evidence to indicate Sitting Bull personally ended Custer's life; and it isn't as though Custer was involved in a patriotic goodwill mission worthy of veneration.

Only a twisted headline writer would try to paint Custer with a heroic face, knowing all that we do now about him and his intentions. But even worse is faulting the Lakota and Northern Cheyenne for rising up against the real deadly threat of seeing innocent women and children being cut down by soldiers.

Who wouldn't fight back? Only a coward.

The Little Bighorn Battlefield, today part of the U.S. National Park System, is hallowed ground and a powerful, somber place to reflect on America and what happened in the frontier West.

You can't help in the silence there but feel melancholy because we, unlike the native survivors, know in hindsight what was yet in store as any hope of preserving their way of life would soon vanish.

Property rights and sacred common law? Our country pretended they didn't apply to indigenous people. In fact, Indians weren't even regarded as humans worthy of having civil rights for many decades afterward.

I think about Sitting Bull's burden as a spiritual man after the battle in being a counselor to whom the people turned for advice about how to persevere, yet knowing in his gut his people had no future.

There was a time when William F. "Buffalo Bill" Cody exploited Sitting Bull in his Wild West carnival act by paying him to re-enact what occurred at Little Bighorn. The money he made couldn't repair the heartbreak that came with winning the battle but losing something, including personal dignity, that could not be described in words. One wonders if the Fox headline writer has ever had to dwell in that place?

In 1890, with no place else to go, Sitting Bull was at the Standing Rock Reservation straddling the North and South Dakota border. Worried that he would encourage his fellow captive Lakota to embrace ghost dancing, the desperate ceremony that would allegedly return their bison-covered plains to them absent of white people, authorities went to take him into custody. Unarmed, he was shot twice. Some believe he was assassinated.

Just two weeks later, nearby, one of the worst episodes of military infamy on U.S. soil happened at Wounded Knee on the Pine Ridge Reservation. In bitter cold December temperatures, 150 mostly unarmed, starving and freezing Lakota children, women, and men were massacred by the Cavalry with 50 others injured.

What would those who today malign Sitting Bull do if the same set of circumstances was repeated by invaders in their own American community? If freedom and liberty are supposed to be virtues worth defending, as we tell our children, then what again, Fox, was Sitting Bull's crime?