From the author Zoltan Istvan (4/14/2016): A change of opinion about John McAfee has made me retract my endorsement of him as the best Libertarian Party presidential nominee in the 2016 election. I still think John McAfee is a fine person and an excellent promoter of freedom, but no longer the best candidate for growing Third-Party politics or the Libertarian Party in America. 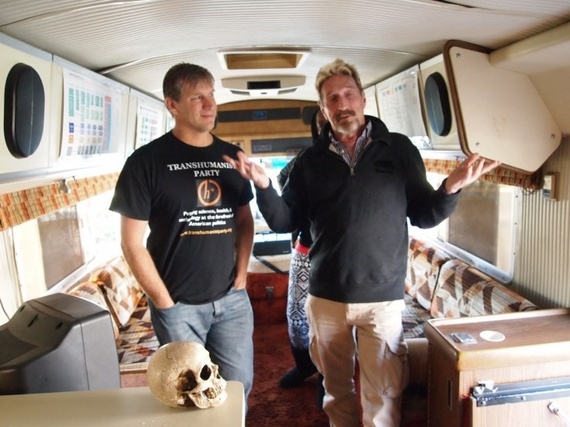 In America and around the world, people are in disbelief over the 2016 US Presidential election so far. Bernie Sanders has risen to become a legend for the youth and hard left leaning. Trump is on his way to forever transforming the Republican Party and likely challenging Hillary Clinton for the most powerful position in the world. Cruz and Rubio, like tens of millions of Americans, are standing baffled at what has transpired in the last year.

The elections have become a flamboyant game show. And the people in the audience cheering the most are shareholders of media companies who are selling more ads than ever.

Unfortunately, much of the chaos and media antics haven't translated too favorably yet for Third parties. Quietly, candidates like myself at the Transhumanist Party, attempt to spread our messages. Don't get me wrong. We are succeeding, but not in the way that America deserves. America owes it to itself to hear the plight of the other leading 50 presidential candidates out there, who also bear important messages. Many of them are astute people that would likely govern well, like Harvard educated physician Jill Stein of the Green Party and Rod Silva of the Nutrition Party.

This could especially be the case if a colorful enough character is the nominee for the Libertarian Party. It's possible the Libertarian candidate could get enough votes to sway the election one way of the other--or at least the media might play it that way for the six months leading up to the elections.

Controversial, volatile, and having more fun than the other candidates, John McAfee could be just the Libertarian candidate America needs to further continue the positive change Trump and Sanders have caused to America's stale political infrastructure. McAfee might have a checkered past, but that's not what's important. What's important is he has charisma and is very media savvy. Like Trump, you can't tear him down, because McAfee thrives off chaos and controversial press coverage. I met McAfee and his friendly wife recently in North Carolina on my presidential campaign bus tour. I debated McAfee, laughed with him, and even drank Scotch with him. I'm quite sure of what I'm writing here.

If McAfee is the Libertarian nominee, he has the ability to do to Third-Party politics what Trump has done to this election cycle. McAfee can elevate the Libertarian Party so that major media is forced to cover it again and again and again. Now that would be something--and it would help the plight of all independent candidates and other Third parties.

Additionally, at least McAfee is talking technology, cybersecurity, and transhumanism, something none of the other candidates seem to even think is important--even though nothing affects human beings and society as much as these advancing fields.

Even though I like many of the other Libertarian presidential candidates, I recommend McAfee as a tech celebrity to gain the Libertarian nomination when it is decided. McAfee is capable of gaining consistent widespread attention in the political national conversation, and thereby putting the major parties on alert that Third-Party politics is something to be reckoned with. Done right, McAfee might even be able to get frontrunners of the Republican and Democratic parties to publicly embrace select Libertarian values to capture additional votes in 2016. I often publicly identify as a left-leaning Libertarian, so I know this would be great for the Libertarian Party to get its message out there.

Personally, I despise the Two-Party system in our country. It's completely un-American, and is just another form of monopoly--except with two heads ruling instead of one. To help fight it, we should embrace explosive personalities who can destroy a political system that favors big money and special interests--neither of which Sanders, Trump, or McAfee need or are beholden to.

Come November, the race will likely come down to Trump and Clinton, but the real winner might be the growing Libertarian Party--and by implication, other Third parties--by putting forth a loud personality who can get America cheering in a very different way. That is progress, indeed.