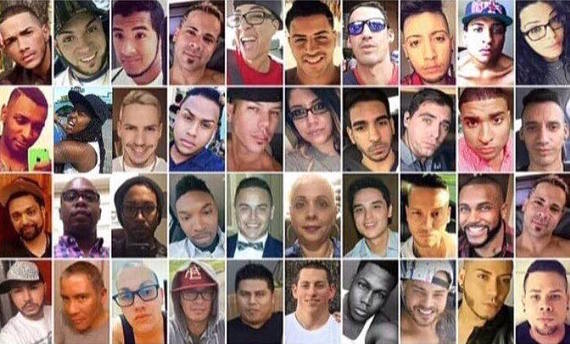 This past weekend, a man was stopped on his way to the Los Angeles Pride event with a car full of assault rifles and ingredients to make pipe bombs. Thankfully, he was caught, but on Saturday night in Orlando, there was the largest mass murder of ‪LGBT‬ people, their friends, and family. It is the largest mass shooting in U.S. history. Two friends of my best friend who grew up in Florida were killed. Grieving, sadness and vigils are appropriate and necessary as we join together to begin healing, and we cope with a horrific reminder that while this month marks the one year anniversary of marriage equality in America, we have not yet achieved complete legal equality or freedom from discrimination and hate. If we want to honor the 49 people who were killed and the dozens more who were injured, we need to remember that those are only the first steps.

The gunman was an American citizen who had been identified by the FBI as a known ISIL sympathizer, and according to his father had become enraged a few months ago when he saw gay people kissing in public. Later reports came out saying he had been been going to Pulse nightclub for as long as three years and that je was living a double life. He was known to beaten his wife before they divorced. He had been reported to his boss as unstable. None of these things prevented him from being able to buy an assault rifle that shoots off forty five rounds a minute. While the person who pulled the trigger is dead, the people who that helped make this possible are still alive. Horrific tragedies like this flourish after being nurtured in an environment where hatred is perpetuated in subtler ways on a daily basis.

Everyone who's ever gone on ‪FOX News‬ and said gay people don't deserve equal rights contributed to this murder. To go on national televsion and say that one American is "less than" another American is to make is more acceptable for that person to be treated as "less than". Every politician who voted for military intervention that contributed to the destabilization of a country that lead to the creation of more religious extremists abroad and strengthening of ISIL contributed to this murder. Every politician, or TV contributor who included all the 1.6 billion muslims in the world instead of just calling out the very distinct hateful group of people who've committed atrocities simply because it was easier to scapegoat than to tell the full story, contributed to this murder. ISIL is no more representative of muslims than the KKK is representative of Christians. The people in those hate groups are distinct and different from the good people of faith in the two biggest religions in the world. Every politician who's taken money from the ‪NRA‬ and later voted against gun safety laws contributed to this murder. Please notice that I used the words "gun safety". I don't hunt. That's my choice. I know people who do. The previous generation of my family grew up on a farm and needed guns to protect livestock (and people) from coyotes and mountain lions. Guns were needed, and guns had rules. Everyone knew the rules and guns were respected as a tool that was dangerous. So far as I know, none of my relatives were in the NRA, and without them they still understood basic gun safety. There are plenty of responsible gun owners, but we all have to acknowledge that the NRA has repeatedly and unfairly influenced politicians for decades and impeded any progress on gun safety laws in America. Again, I said "gun safety", not "gun control". We all don't have to think the same way about this guns in America, but I think we all can agree that good people should be safe. Whether someone is shooting animals for sport or for food, or just going to a range for target practice, we have to acknowledge that the leaders of the NRA contributed to this murder. Even though most card carrying member of the NRA that would never condone or commit such violence, by continuing to be a member of this organization that essentially legally bribes politicians and obstructs reasonable measures of gun safety, supporting this organization through membership is contributing to the problem.

O grew up in the Catholic church. I had a Baptism, I went to CCD, and I was confirmed. Growing up, we were taught that love was at the heart of Christianity, and that Jesus cared for everyone. There are good pastors and priests out there, and there are gay-affirming churches. There are also hateful ones.
Every preacher, pastor, or priest who's falsely claimed that LGBT people are "sinners", "perverts", or told someone to "pray the gay away" contributed to this murder. Every "therapist" who pushed "gay conversion 'therapy'" on a client contributed to this murder. (This has long since been discredited by both the American Psychological Association, Exodus International who are widely credited for spreading these methods, and even Republican Chris Christie). Everyone who's ever heard the leader of their church say that gay people are going to Hell and didn't speak out against his hatred contributed to this murder. Every pastor, like Scott Lively, who went overseas to countries like Uganda and convinced people that gay people were "pedophiles" contributed to the murders in Orlando and the countless ones internationally. Everyone who watches FOX News even though they frequently give airtime to some of the most aggressively anti-gay commentators is helping validate hateful words, even if you don't agree with what they're saying. School administrators who've turned gay teen couples away at their prom, or made a trans student dress a certain way, or didn't fairly punish a student for bullying an LGBT kid, contributed to this murder and to the thousands of teen suicides that happen every year. LGBT young people are at least gour times more likely to commit suicide, and treating them in these hurtful ways opens the door for extremists to feel emboldened in their hatred and their desire to creat violence. Everyone who voted for a ‪Republican‬ candidate that supported Tennessee's "Don't Say Gay" law contributed to this murder. Every baker or florist who refused to sell their goods for a gay wedding contributed to this murder.

Every American President or presidential candidate who ever said that "marriage is between a man and a woman", or supported "Don't Ask, Don't Tell", or supported The Defense Of Marriage Act contributed to this murder. Donald Trump‬ is a hate filled atrocity and his candidacy is the result of eight years of the Republican party saying that the LGBT community and the muslim community are "less than". ‪We must never let him take office, but in efforts to defeat his candidacy, we cannot allow ourselves to believe that Hillary Clinton‬ or any other politician has been perfect. She failed the gay community on all three of the examples above. I'm making a bi-partisan case that every American should have the right and should should be responsible for demanding that she do better as a leader, and make sure that she and every politician follows through on their promises.

I do not believe I have politicized this tragedy in any sort of negative way. It was politicized when Marco Rubio said this could have happened anywhere, but that it was "Orlando's turn". It was politicized when the Republican party on Twitter (@GOP) failed to make any mention of the murders in Orlando whatsoever. They did, however acknowledge George H. Bush's birthday, who (it's worth mentioning) said in the 90s that he believed no one needed an assault rifle. Ronald Reagan said the same thing too. In spite of this, when asked what Americans could do to help prevent this from happening again, Florida Governor Rick Scott would only tell reporters that they should pray. As I said at the beginning of this piece, prayers and grief are the first step. The second step is action.

I do not believe any of this is an overstatement. Ugliness and hatred grow and get out of control. EVERY DAY, we have opportunities in small and big moments to MAKE CHANGE HAPPEN, or allow goodness to decompose. We cannot just say how tragic this is. We need to demand change from our government, and we need to change ourselves. Demanding our government work better is the most patriotic thing we can do.

I'm carrying guilt within me too. As vocal and active in politics as I think I've been, I still feel there is more that I could have done to prevent things from getting as bad as they have. I'm starting with raising my voice and saying things that are long overdue. My best friend lost two of his friends in Orlando that night. They were out dancing on a Saturday night. They died because of hatred and politics that are bigger than all of us. It's a major election year. Can we agree that ‪#‎NeverTrump‬ is critical, but that giving ANY politician a free ride puts us all at risk? If we want to honor those who were killed in Orlando, or Sandy Hook, or Newtown, then we need to demand more of our politicians, starting with:

1) Work for equality for the LGBT community and everyone;
2) Enact reasonable gun safety laws;
3) Favor diplomacy over military violence overseas as much as possible to prevent creating new extremist enemies who seek to harm us.

We need to vote out as many bad politicians as possible, and reelect the good ones, because it's the best thing we can do to honor the lives of the people who died, and support the families and friends of those who are suffering. EVERYONE OF US NEEDS TO SHOW UP AND VOTE!

Click here to learn how to contact any and all 535 members of Congress including those representing your district.

Click to watch Samantha Bee's irreverent, honest (and yes occasionally humorous), take on how to prevent this tragedy from happening again. She astutely points out a bible quote,
James 2:17 "Thus also faith by itself, if it does not have works, is dead."

Stand up, and take part in every way you can.

"The only thing necessary for the triumph of evil is that good men should do nothing."