In response to your controversial tweet, a Gawker gal reported that you think women who wear high heels don't have a brain... and proceeded to bring upon you the wrath of the twitterverse. Well, as a high-heeled entrepreneur, here's my response.

You're probably expecting me to be offended, pissed off, or at least annoyed -- particularly because my love affair with high heels is easily verified by one look in my closet -- but if I were, I'd simply invite a variety of comments about hormones or something of that sort, while leaving you as ill-informed as I found you. (Though they'd probably put me on Gawker, too.)

For that reason, among others (which I'll explain below), I've decided not to fuel the fire of ignorance. (So, they probably won't put me on Gawker.)

Not many others noticed, but it appears you beat me to the punch in responding to this article: 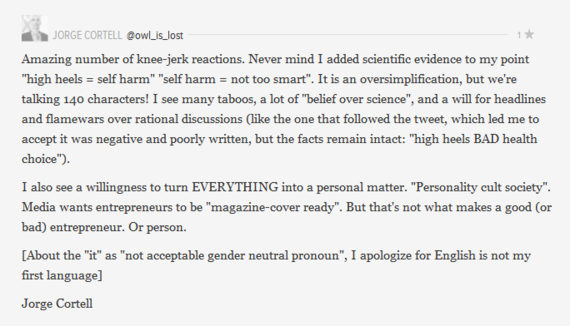 You're not the first person to dig yourself into a hole with a tweet that was, well, "not too smart." Take, for example, Geraldo Rivera and his save my fish campaign, Sarah Palin's made-up language, or Heidi Montag's plastic surgery advice.

But I guess that's the temptation Twitter creates: To tweet before you think. (What was that hashtag you used? Oh yeah, #nobrainsrequired)

No, I'm not here to add to the cacophony of voices that stood ready to point out your tactless communication style. Rather, I wanted to tell you something you're probably not expecting:

Allow me to explain in more than 140 characters, so as not to oversimplify.

You're right: High heels are bad for your health. There's little doubt about this. In the past few months, I've seen two of my greatest style icons, Sarah Jessica Parker and Victoria Beckham, face major foot problems due to their love of heels.

Women sure as heck don't wear high heels for their cloud-soft comfort. What men often don't realize, though, is the pressure to be "magazine-cover ready" in the business world can be so strong that women feel they must choose between killing their upward mobility or killing their feet. Being pain-free or being respected. Feeling confident or feeling lost in the crowd.

For others (perhaps myself included), they're an emotional addiction. I wear them for the way they make me feel. The sense of control over myself and others I acquire when I slip my feet into my favorite shoes. It may be similar to why some men love muscle cars.

Both men and women face these problems at work. We tend to define ourselves by what people think of us instead of what we think of ourselves. For women, this issue comes out in the way we present ourselves -- and it can have more to do with a woman's shoes than you might think. For men, this looks a little different, but it can be just as unhealthy.

You're right: It's not smart to hurt yourself. But it does make total sense for a woman to want to convey her beauty, confidence and value to others. This is somewhat of a dilemma for women. But it's more complicated than just style vs. comfort.

Let me put this in men's terms. Why do you lift weights, take creatine, other supplements and maybe a little blue pill once in a while? All of these things come with a range of physical dangers, and they all can sometimes be helpful to get the results you want. But are they worth the risks?

Each man has a different answer, but the bottom line is that it's rarely a simple one.

You're right: The media wants entrepreneurs to be magazine-cover ready. The media is just a small part of our culture's broken systems, bombarding us with optimized images of perfect people on 400 stations, 24/7, 365.

Sometimes, that same media system will crucify real people for making dumb statements, which are not necessarily representative of actual the values or life of the person. It may not be fair, but 140 characters is more than enough to dig yourself into one hell of an unforgiving ditch.

I think you made a rash, stupid statement, and you're probably not as terrible as person that statement might make you seem. But I forgive you. Lord knows I've stuck my high-heeled foot in my mouth more than once.

I told you I was an entrepreneur. I actually founded a startup called Sthira Design. By bringing together a brilliant and driven team including rocket scientists (yes, literally, rocket scientists), fashion designers, engineers and advanced manufacturing experts, we are working to make a high heel that's both chic and anatomically sound. Although we don't officially launch until next year, I thought it was important to join the debate anyhow.

In the end, I agree with you: Most high heels, especially the pretty ones, hurt. And we can do better for women than the options we currently give them.

And though you didn't do it intentionally, I think the buzz generated by your little tweet just reveals to us how much of an issue this really is.

I can't say I know the solution to our culture's superficial tendencies. But I think part of the fix lies in finding out enough about others to know the value they bring to the world, and realize how much we're all worth behind the suits and ties and dresses and heels.