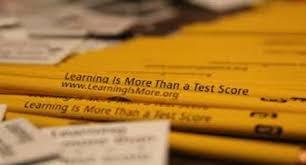 On April 06, 2016, former White House correspondent for Politico Joseph Williams published an article in Takepart entitled, "Why Some Black Leaders Aren't Down with Opting Out of Standardized Testing."

The deck of the article is, "Marc Morial of the National Urban League is among the many critics of the push to ditch state-mandated assessments." However, Williams' article is not an anti opt-out article.

Though Williams does open with Morial, the piece includes solid arguments for opting out of standardized testing -- and acknowledgment that the opt-out movement is gaining support from African American and Latino parents.

As for Morial's perspective: The bottom line appears to be the overused, "hold teachers and schools accountable":

If we don't have testing, we don't know where the achievement gap is. We're flying blind. ...

I am a teacher, and I am more than willing to be held accountable for my students' test results- but only for 1 to 14 percent that the American Statistical Association has found that I realistically influence.

I am also willing to put the other 86 to 99 percent on Morial and others who push test-score-centered "accountability" as proof that I am really teaching.

But back to Williams' article:

It's a good one. Here are some highlights:

...Leaders in the opt-out movement point to scores of parents in cities like New York, Chicago, and Philadelphia who have thrown in with their suburban opt-out counterparts. They argue that the system of constant, fill-in-the-bubble assessments eats up time that could be spent teaching or counseling their kids, and that administrators typically use scores to close struggling schools rather than shift resources to help them improve.

"They definitely use those tests against the children and the neighborhood and the community," Shakeda Gaines, an African American mother and member of the Opt Out Philly group, told Politico. "What happens to the community when the school closes? It destroys the whole neighborhood. This is more than we bargained for." ...

Bob Schaeffer, the public education director of FairTest, the National Center for Fair & Open Testing, said critics of the white-minority, opt-out alliance are missing the point.

The average kid in a hardscrabble urban school district takes 112 standardized tests from elementary school through high school, and "it hasn't helped," Schaeffer said, adding that struggling districts are still struggling. There's a better way to determine "unequal resource distribution without jumping the shark of having year-round testing," he said.

"We want to make clear that we need a new direction," he said. "More and more testing, with more consequences attached to it, isn't the answer to these real problems."

Over-testing "is an important issue for parents of all backgrounds," Schaeffer said, adding that there has been "a significant increase" in parents of color joining the opt-out movement. "African American and Latino parents have the same concerns about testing overkill" as white parents.

The bottom line, he said: "More testing isn't the answer; better assessment is the answer."

You know, it is possible for the "gap" people to measure their gaps using random sampling just like the National Assessment of Educational Progress (NAEP) uses. Too, with NAEP, students' names are not recorded on the tests. (By the way, students selected for NAEP can easily opt out, and it doesn't "ruin" the NAEP results.)

But what is lost in following random sampling with anonymous report is the blame game of tying the test results to specific teachers and schools (which also ultimately falls on the heads of its teachers).

What is lost is placing up to 100 percent of the score outcome responsibility upon those who at most control 14 percent of it.

This appears to be the heart of what Morial wants.

It's good to know that Williams' article is so much more than its headliner discloses- I'd say at least 86 percent more.