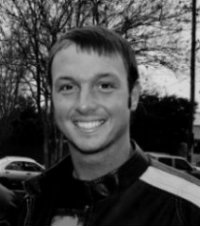 This is Matt Moore. He's a blogger for The Christian Post. (So am I! Except I never blog there. I probably should; they've been really nice to me.) Matt, who is gay, writes about how homosexuality is sinful, wrong, an abomination unto God, etc. His blog is called Standing on Truth. Typical of its posts are "My Story: Homosexuality, Drunkenness, Grace and Redemption," "Leaving Homosexuality: The Real Power Of My Testimony" and "Why Does God Allow People To Be Gay If He Hates Homosexuality?" (Spoiler alert: because it makes them sinful enough to need Jesus.)

"[My] blog is geared toward the struggle with homosexuality," writes Matt, "but it applies to all sinful struggles. We all have sinful natures and struggles that we wish we didn't have. But Christian, know that God is working everything -- even your struggles -- for your good and His glory. So keep fighting ... soak yourself in the Word, pray without ceasing, and persevere."

Maybe not optimum use there of the word "soak," but you get the idea: gay, but self-negating through God, basically. That's Matt's whole public thing.

It was, anyway, until Monday, when on her blog the great Zinnia Jones shared that a reader of hers had found Matt's profile on Grindr, the popular app that lets you "Find gay, bi, curious guys for free near you!" After he'd been outed for being out, Matt wrote Zinnia to confess that yes, that was indeed his Grindr profile, the putting up of which, he wrote, was "a major disobedience on my part ... disobedience to Christ. Disobedience to a loving and gracious God. " He also vowed, "I won't be on grindr again ... ever."

The poor guy. He's just, well, really young, for one. He's 23. I've got a pair of Ugg slippers about that old. They're disgusting; they look like they have mange. Matt, on the other hand, is not disgusting and appears entirely mange-free. Which I believe comes in handy when you're advertising on Grindr.

You're doing the crazy thing, friend: You're splitting the hair between being gay and actually allowing yourself to be in a gay relationship. You're saying that it's OK to be gay; it's just not OK to engage in gay love. But that's like saying it's OK to have lungs, but it's not OK to breath. One goes with the other. Separate the two and things get real ugly real fast. Shit start dying.

I wrote a piece called "Wings on a Pig" about the now common, horrendously irrational and ultimately cruel notion that being gay is just -- as you claim it to be -- another sin that needs resisting. The main point I made there is this one:

The Big Difference between homosexuality and all those activities generally understood to be "sinful" is this: There is no sin I can commit that, by virtue of committing it, renders me incapable of loving or being loved. I can commit murder. I can steal. I can rob. I can rape. I can drink myself to death. I can do any terrible thing at all -- and no one would ever claim that intrinsic to the condition that gave rise to my doing that terrible thing is that I am, by nature, simply incapable of giving or receiving love.

No one tells the chronic drinker, or glutton, or adulterer, or any other kind of sinner, to stop experiencing love. Yet that's exactly what so many Christians are insisting that gay people do.

When you tell a gay person to "resist" being gay, what you are really telling them -- what you really mean -- is for them to be celibate.

What you are truly and actually saying is that you want them to condemn themselves to a life devoid of the kind of enduring, romantic, partner-to-partner love that all people, Christians included, understand as just about the best part of being alive.

Be alone, you're demanding. Live alone. Don't hold anyone's hand. Don't snuggle on your couch with anyone. Don't cuddle up with anyone at night before you fall asleep. Don't have anyone to chat with over coffee in the morning.

Do not bind your life to that of another. Live your whole life without knowing that joy, that sharing, that peace.

The "sinful temptation" that Christians are forever urging LGBT people to resist is love.

Being, of course, the one thing Jesus was most clear about wanting his followers to extend to others.

Does that make sense, Matt? It's perfectly OK that you're gay. You get to be gay, and be married, and know a life with a loving partner, just like the life I cherish with my wife. I don't get to enjoy more of life than you do simply because I was born straight. God did not create a special order of humans that he punishes for loving and being loved. He did not decree that some of us get to know love in both its spiritual and physical aspects, while others of us get only half of that. What God worth worshiping would be so cretinous? Have more faith in the God who made you and me, buddy. We all get to have, know, and experience love. Straight people, gay people, bi-people, transgender people ... all of us. The eternal, inviolate, and sacrosanct birthright of every person ever born is to give and receive the love that God himself designed us to yearn for and experience.

You don't get to be the exception to the rule of needing and deserving full love, Matt. You couldn't be that exception if you tried. You have tried at that, and failed. And you are destined to fail at that over and over again, until the day you realize that the only one endeavoring to prevent you from being all that God made you to be is you.
Download
Calling all HuffPost superfans!
Sign up for membership to become a founding member and help shape HuffPost's next chapter
Join HuffPost