Women bear extraordinary burdens in war. This reality was starkly clear during my recent visits to Turkey and Jordan and as I travelled to Kuwait for the UN's humanitarian pledging conference for the people of Syria. While traveling last week with Assistant Secretary for Population, Refugees, and Migration Anne Richard and Ambassador to Syria Robert Ford, we heard firsthand what this crisis means for the people, and especially the women, of Syria. We took this trip to listen to the people of Syria and to underscore the United States' commitment to stand with them in their time of need.

In Islahiye Camp in southern Turkey, we met Efet, an eloquent young woman no longer able to pursue her law studies. She called on us and others to focus on the needs of the many women still inside Syria -- those who are pregnant and need medical help, those suffering from rape and violence, and those struggling to find food and clean water for their children.

In a smoky teahouse in Amman, I met Nouf, who has already lost her husband and older son, and fled from Homs with her teenage son to keep him from being drafted, arrested or killed. Like so many women I met, in a tragic use of mobile technology, she showed me photos of her late son and husband on her cell phone. Now safe in Jordan, she still fears for her daughters back in Homs where food and basic supplies are growing scarce. She worries how she will manage in Amman without savings. And she has bleak hopes for the future.

Nouf is just one of millions of Syrians whose lives and families have been yanked into chaos by this crisis and the brutality of the Asad regime. In Jordan, at the Syrian border at midnight, the moon faintly illuminated a landscape of scrubby vegetation and the outlines of hundreds of families who had just crossed into safety. In groups of 100, they were welcomed and processed by the Jordanian Border Guard, then bussed to the Za'atri refugee camp, joining some 60,000 refugees already there. In the single night we visited, more than 3,000 people left Syria for the safety of neighboring countries.

As part of our ongoing efforts to help the Syrian people during this devastating crisis, the United States has prioritized the provision of urgent medical help, food, blankets, warm clothes, and protection to help more than 1.5 million people inside Syria and the growing number of refugees living in neighboring countries. But we know that more needs to be done.

Additional funding is one vital part to meeting this challenge. Jointly hosted by the UN and the Emir of Kuwait, the UN's recent pledging conference raised more than $1.6 billion in humanitarian assistance for the people of Syria and came at a pivotal time for Syrians struggling to survive. On the eve of Kuwait, President Obama announced an additional $155 million in humanitarian assistance on behalf of the United States, bringing the total U.S. commitment to $365 million.

Of the U.S. government's contribution, more than $200 million to date is now going through all possible channels to meet the needs of families inside Syria. But these needs are growing, and for this assistance to reach and help all those who need it most, we must -- together with the international community -- continue to press firmly for the access essential to any effective humanitarian response.

As the UN confirmed on January 28 Syrian regime continues to block access for aid workers. The United States strongly supports the UN's strong stance in pressing the Syrian Arab Republic Government for greater access for humanitarian assistance into contested and opposition-controlled areas. And we are seeing some real breakthroughs as a result, including a UNHCR convoy that just last week was able to deliver 2,000 tents and 12,000 blankets to Syrians displaced in the difficult to reach far north of the country.

Closely coordinating with the Syrian Opposition Council's Assistance Coordination Unit was a key part of enabling this mission to cross conflict lines, and both the UN and the U.S. government are actively strengthening this partnership as part of our wider effort to ensure more life-saving aid reaches Syrians throughout the country.

All parties to this conflict must ensure that our humanitarian assistance can reach those who need it most in their time of need. The women of Syria and their children -- the families who have been displaced two or three times -- urgently need our help, and it is our responsibility as the international community to push harder than ever for the access we need to reach them. 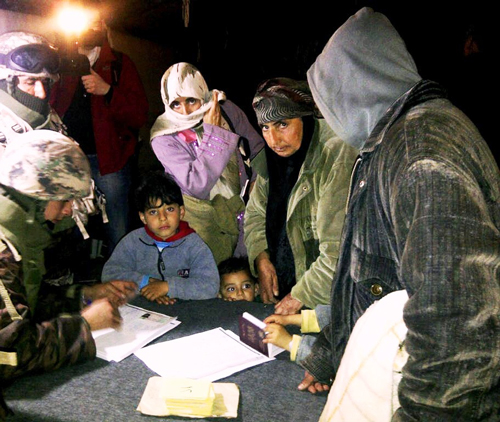 Assistant Administrator of the Bureau for Democracy, Conflict, and Humanitarian Assistance at the U.S. Agency for International Development