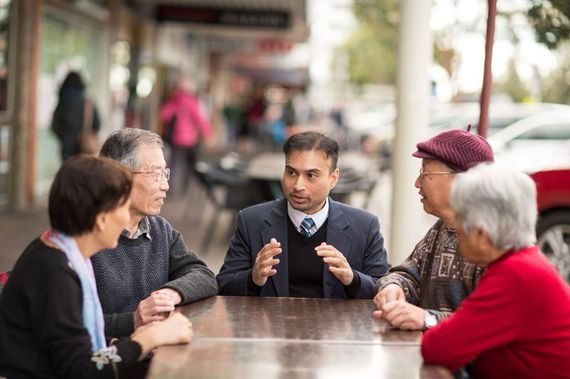 Lately, my Facebook notifications have been dominated by posts of friends running in the upcoming elections for local council - often described as the first step in a political career. It seems politics is the new black. But despite the increase in candidates from multicultural backgrounds, there is a clear absence of 2nd and 1.5 generation migrants (those born overseas but raised here - my peers). This is particularly true for those of Asian and other non-European ancestries. It's reflective of a broader wrinkle in the ongoing narrative of multicultural Australia: disengagement by this group in relation to public office, public service and political life. This is accompanied by national parliaments unrepresentative of an Australian community in which one in four were born overseas, 46% have at least one parent born overseas and nearly 20% speak a non-English language at home.

I experienced a hint of my generation's disengagement in my last year of uni, when I'd been accepted into the Department of Foreign Affairs and Trade. I felt fortunate as DFAT had one of the most prestigious graduate programs in the country; at least, it was considered so amongst Anglo-Australians. But when I told a friend of mine, who like me, was of Sri Lankan origin, his furrow-browed response was "which company is that?". Years later, another friend, when informed that I was to be posted overseas as a diplomat, asked "so what will you be doing? IT?"

The disengagement was again clear when I moved to Canberra in the mid-2000s. It reminded me of primary school in the 1980s; that's how far back I had to delve into Melbourne's past to recall a time when there were so few other brown people in my peer group. Central agencies in the public service were far whiter than their prestige-equivalents in the private sector like the investment banks, at least at the graduate level.

So why these discrepancies and why this disengagement by migrants? Firstly, there is the legacy of decades of broad disinterest in politics amongst masses of all cultures across the West (which is now changing). Much has also been written about the significant structural barriers and racism faced by multicultural Australians in all fields. But there are also reasons which are more internal to certain migrant communities, in particular, the notion of what constitutes success.

In many of the homes of our friends from similar cultural backgrounds, parents perceive their children's success as deriving from education and obtaining a job that earns above-average income and garners above-average respect. These are often restricted to professions deemed familiar and stable by parents. This is likely underpinned by hardships in parents' countries of origin, combined with the experience of restarting life at the economic bottom in a new country. Asian migrant children are often encouraged to do medicine, accountancy, engineering, while the children of similarly educated Anglo-Australian parents seem more likely to be given the freedom to volunteer overseas and follow careers whose raison d'être is beyond profit. There are of course notable exceptions like commentator Waleed Aly, MP Peter Khalil and Senator Penny Wong. Unfortunately, when trudging the lonely, winding trails toward senior roles in the political realm, many have to begin two steps behind.

This is ironic given that many 1st gen migrant parents themselves have broader interests than financial advancement - as seen in the plethora of them running for council. At Sri Lankan dinner parties, middle-aged men accompany their scotch-and-sodas with lively political discussion, as much as they talk about cricket. The focus, however, is usually Sri Lankan politics or geopolitics, much less so #auspol.

Some migrant groups have done exceptionally well according to the economic definition of success. The Sri Lankan community is a remarkable example. I've seen our family friends first settling in working class Dandenong and Noble Park, moving to spacious new houses on the suburban fringe like Endeavour Hills or Narre Warren, then back towards the city into middleclass and middle-ring suburbs like Mt Waverley and Glen Waverley. Their kids grow up and reside in places like East Malvern, Hawthorn, Southbank or London.

While socio-economic mobility is important, and sometimes a prerequisite for lofty political ideals, restricting ourselves to this linear pathway ignores one of the fundamental sources of human fulfillment throughout history: the ability to shape and engage one's community. This is a core aspect of our nature as social animals. Anthropology's 'social brain hypothesis' entails that human intelligence evolved as a means of surviving in large, complex groups. Our brains were built for politics.

I had, early on, considered running for local council myself, something regarded by some peers as low down in the prestige rankings. While ultimately I did not to run (which I now regret), the early canvassing I did for myself and candidate-friends made me feel more alive than any professional experience I've ever had. Speaking to people from your own suburb, but with whom you'd rarely otherwise interact, instills a sense of community that traverses cultural backgrounds. It washes away false divisions like race, providing a clear view of the underlying economic pressures which unite all working people. Being out on the hustings even stimulates new neural pathways, honing your ability to read and predict peoples' values and leanings. Repeatedly asking strangers to have faith in you does wonders for your humility. As my sociologist friend who accompanied me attested, campaigning was like entering a whole new world.

Disengagement from political and civic life constitutes not only a loss for my generation of migrants, but also for our nation as a whole. For instance, Australia's diplomatic arsenal would benefit greatly from tapping our multicultural population which hails from every country on earth - particularly important given the emerging multipolar world order. Growing up in multi-ethnic Dandenong gave me a firsthand, nuanced knowledge of numerous cultures. Experience navigating the complex dynamics between groups gave me a head start in understanding the world of international relations. Having had friends from Mandarin and Cantonese speaking China helped inform my discussions in the Foreign Service. Similarly, Australian political parties would do well to access the maneuvering abilities ingrained in many complex South Asian cultures (presently being deployed only in the small-stakes game of internal politics within community organisations). Political strategists are also aware that despite the lack of encouragement of children pursuing such career paths, once one of us reaches a senior political position, the entire community often rallies behind the erstwhile outlier.

Both migrants and the wider Australian community have roles to play in improving the situation. Fortunately, many government departments have begun attempting to diversify their graduate intakes. In politics, more transparent, meritocratic pathways to success within Australia's major parties, particularly in selecting candidates, would attract migrants who are highly capable but unfamiliar with the labyrinthine, unofficial rules of the game. Encouragingly, members of the Labor Party have founded a group called Poliversity to advocate and support culturally diverse leadership and representation within the Party, as well as external outreach.

In addition, more passionate, free-thinking politicians who seek to lead and shape opinion over the long-term, rather than follow the polls, would increase respect for a career in politics amongst all communities. This would be timely, given the wildfire of populist political activism spreading across Western countries. Ordinary people have been both inspired and fired up as seen with the Bernie, Trump and Jeremy Corbyn phenomena. Hopefully, some activism infects Australia's 2nd and 1.5 generation migrants and we see more clearly the meaning and value derived from striving to influence how our neighbourhoods, cities and country are run.

Dr Kadira Pethiyagoda is a visiting fellow at the Brookings Institution. He has advised parliamentarians on foreign policy and was a visiting scholar at Oxford University. He is writing a book on Indian foreign policy and another on his experience as a migrant representing Australia overseas as a diplomat. Dr Pethiyagoda is to be appointed as a member of the interim Board at Poliversity.

A shorter version of this article originally appeared in the Labor Herald.