The afternoon began inauspiciously enough. Sekeyian Yiaile, our executive director, and Cassandara Selberg, our medical director, were scheduled to meet with Maasai women, in a village adjoining our headquarters in the Talek region of the Maasai Mara in Southern Kenya. The purpose of the meeting was to conduct a needs assessment for a women's health center we are constructing nearby. Since our clinic will be the first women's health center in all Maasai Land, it is vital that we talk to our future patients to ascertain their health care needs.

Sekeyian Yiaile, age 30, is the founder and executive director of the Maasai Children's Initiative. Raised in a traditional Maasai village, she refused to be married off at age 14 and ran away from her home to go to school. Her education ultimately progressed to graduate school in the United States, however, Sekeyian remained committed to improving the status of Maasai women in Kenya. In 2006, she founded the Maasai Children's Initiative, an organization that currently operates a primary school for 150 Maasai girls; feeding programs at three other schools; a solar powered computer lab and a women's health center, all in the Maasai Mara region of Southern Kenya.

Cassandara Selberg is a nurse practitioner at Oregon State University. Over ten years of practice, she developed a keen professional interest in women's health, and reproductive medicine. Eager to apply this focus to the developing world, Cassandara accepted the volunteer position of medical director of the Maasai Children's Initiative. This January 2010 visit was her first trip to Africa. 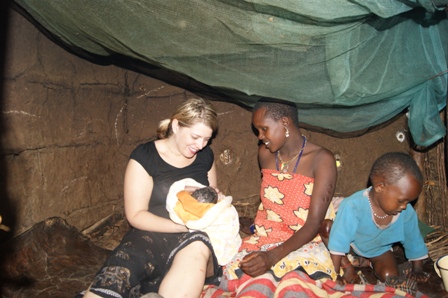 Sekeyian arrived at the village before Cassandara to gather the women for the program. There, she discovered that the village women had a much more pressing concern than an abstract needs assessment. A women in labor was lying in a hut screaming in agony as her baby refused to progress. She had been in labor all day, was exhausted from pushing. She told Sekeyian she was ready to die.

Sekeyian called me on her cell phone and asked me to drive to the village with Cassandara, who had not delivered a baby since graduate school. Fortunately, Sekeyian had a delivery kit which had been distributed by WHO, consisting of surgical gloves, clamps and a sharp blade for the umbilical cord.

Driving to the village, I pondered the various evacuation strategies that we might have to employ to drive the mother through the bush for three hours to get to the nearest hospital. Next to me, Cassandara, a devout secularist, prayed silently for the wisdom, judgment and strength to deliver a baby for the first time in a decade in conditions she could never have imagined.

We arrived at the village and walked quickly to the hut. The anxious father was sitting outside, surrounded by village elders. A dozen young kids were running around the hut, playing nervously. As Sekeyian and Cassandara entered the hut, I waited outside and amused the children with my camera. In Maasai culture, men do not participate in the birthing process.

Maasai huts are remarkably similar no matter in what village they are located. Constructed of mud and dried cow dung packed over a lathing of twigs, each hut is twenty by twenty feet square and six feet high. Within each hut, half the area is walled off for goats and baby cows. In the remainder of the space, there are two beds of stretched cow hide on either side of the room, one for the husband and one for the mother and small kids. Between the beds is a living area and cooking pit where an open fire spreads smoke throughout the chimneyless hut. The only light comes from an occasional candle and a few three inch holes in the exterior wall. 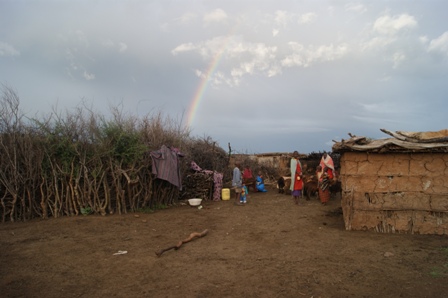 In the dark and smoky hut, Nashiba* was lying on a bed exhausted, discouraged and fearful. Approximately 20 years old, this was her third child and, while each prior delivery had been difficult, this was by far the worst. The attending Maasai women, though experienced in basic midwifery, had nothing further to offer her.

With Sekeyian translating, Cassandara asked Nashiba if she could examine her. Nashiba agreed and Cassandara probed inside the birth canal discovering that the baby had only descended half way, despite labor having started in the early morning. Cassandara encouraged Nashiba to push through her contractions. When no further progress was made, Cassandara asked if she wanted to change positions. She helped Nashiba to move into a squatting position, harnessing the force of gravity to the birthing effort. Holding Nashiba from behind, Cassandara exhorted her to push through each contraction as though she were pooping. Cassandara asked another woman to hold Nashiba upright and came around to the other side of the bed, massaging her perineum to prevent tearing.

Despite these efforts, the baby refused to progress. Reaching inside, Cassandara did not feel any obstruction and encouraged Nashiba to push harder. When no progress resulted, Cassandara reached deeper in the birth canal and found that the umbilical cord was wrapped tightly around the baby's neck. She was able to get a finger underneath the cord and pull it over the baby's head. Once unfettered, the baby could complete its descent down the birth canal. With her next contraction, Nashiba pushed and the baby crowned. With the next contraction, a baby boy fell into Cassandara's waiting arms, still and lifeless. A collective gasp emanated from the surrounding women, sure that the baby was dead.

Scrambling to cut the cord, Cassandara kinked the umbilical cord like a hose while Sekeyian handed her the clip from birthing kit. While one of the attending women held the flashlight on the clip, Cassandara clipped the cord close to the belly button. The baby sucked its first breath and let out a cry, causing relief and joy to everyone in the room. As Cassandara quickly moved her fingers out of the way, another woman took the cutting blade from the birthing kit and cut the cord.

While Cassandara's quick intervention had saved the life of the baby, Nashiba's health was still at risk. Unless the placenta was extracted the uterus would not contract and she could hemorrhage. Exhausted and dazed, Nashiba could not manifest the strength to push the placenta out. While Nashiba squatted at a 45 degree angle, Cassandara began massaging the top of her uterus, exhorting her to push just a little bit more. Gradually, the placenta was extracted. Cassandara examined the placenta and found it to be healthy and smelling of rich iron -- a good sign.

Nashiba collapsed onto the bed, exhausted but thankful for the successful birth. Too tired to hold her baby boy, the aged grandmother took the newborn and rubbed oil into its scalp. Cassandara and Sekeyian emerged from the darkened hut, exhilarated and joyful. With blood smeared on her white blouse, Cassandara felt elation and pride. As we walked to the car, a rainbow emerged over the Serengeti ski.

Driving back to our headquarters Cassandara's adrenaline receded and her professional demeanor diminished. For the first time, she allowed herself to comprehend the sheer terror of the emergency she had just overcome. Tears streamed down her cheeks as she realized how close Nashiba and her baby had come to death.

Later that evening, we went back to check on the baby. The village is a half mile from our headquarters and I suggested we walk. Sekeyian looked at me like I was crazy, saying it was not safe to walk through the bush after dark. With macho condescension, I obligingly got in the car.

In Nashiba's hut, life had returned to normal. Baby goats were crammed into half of the house and were braying noisily. A fire was burning in the main living area, filling the entire house with acrid smoke that caused our eyes to water and throats to hurt. Next to the fire sat the grandmother, cradling the newborn boy in her arms while Nashiba's husband and other children sat about.

Lying in her bed, Nashiba was still tired. She had breastfed the baby several times and was clearly in recovery. Cassandara gave her a bottle of Ibuprofen, examined her uterus and discussed breastfeeding. The grandmother brought the baby to Cassandara who, sitting on the bed with Nashiba, pronounced the five pound baby healthy and secure.

We left the family in their hut and made our way back to the car. Along the way, several village elders thanked Cassandara for saving mother and child. As we were escorted to the car, we learned that a lion had just been seen lurking around the village perimeter. My bravado quelled, I got back in the car and drove the half mile back to our headquarters, grateful for Sekeyian's caution.

With each trip to Africa, I become more aware of every individual's ability to accomplish goodness in the world, and of God's power to provide us with the opportunity to perform miracles on his behalf. In realizing that Nashiba's baby would have died without Cassandara and Sekeyian's fortuitous involvement, I am reminded of the Talmud's teaching that: "To save one life is as if you have saved the world". With their courage as an example, I renew my commitment to save the world, one life at a time.