Lots of big brands, traditional advertising agencies and digital agencies have been throwing around the word "storytelling" lately to describe what they do. I regard such pronouncements with the same skepticism the religious reserve for deathbed conversions: in a fearful moment, the converted are saying what they feel they must, even if they don't really understand what it is.

Most traditional ad agencies and digital agencies simply do not understand brand storytelling. They usually try to tell stories about the brand, which is just traditional advertising with a new label. Or they tell stories unrelated or tangentially related to the brand and use the "brought to you by" approach familiar from TV's earliest days. But in this post-advertising age, the brands that are succeeding are the ones that literally turn themselves into stories--creating original media that their customers actively choose to engage with, explore and then share with others. 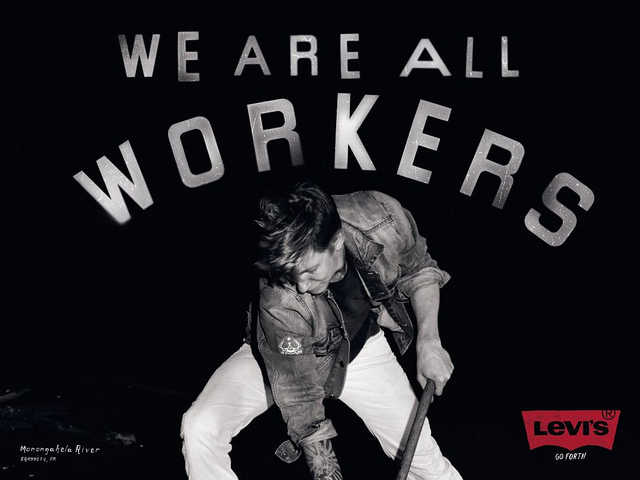 Levi's effort marks new steps toward post-advertising by both a very traditional brand and its formerly very traditional ad agency, Weiden and Kennedy. As you will see, they are faltering steps. But they are in the right direction.

In its most recent quarterly earnings call with analysts, Levi's attributed its recently increasing sales--up 8% worldwide--to higher-quality, better-designed jeans. It's true, by the way. Levi's jeans are much better than in the recent past. I just bought three pair, my first Levi's jeans in more than 20 years.

But what got me into the Levi's store in SoHo to see those better jeans is their higher-quality, more engaging advertising--specifically a series of mini-documentaries about the efforts to save Braddock, PA, a rusted and debilitated steel town on Pittsburgh's edge that is fighting for survival. The documentary series is one of the big new initiatives in the jeans-maker's "Go Forth" ad campaign, now entering its second year.

Oddly, in that same earnings call, Levi's had to be asked before it mentioned its marketing. Ad and promotion spending was up nearly a fifth for the second quarter and almost a third for the first half of this year. Most of the $32 million in increased spend (from $97.9 million in first-half 2009 to $129.6 million in the same period this year) has been lavished on marketing for Levi's and Dockers in the US, the company reported.

Part of that extra $32 million went to fund journalism. Levi's, partnering with IFC and the Sundance Channel, is creating filmed reports on the efforts to turn around the failing community of Braddock. The mini-documentaries, which presumably will be cut into a feature-length documentary one day, are being parceled out on Levi's brand website in roughly 4-6-minute segments. The resulting series, thus far, represents a kind of community journalism that rarely gets done in these hard times for the news business. So Levi's efforts are notable as a rare example of a brand reporting the news. (For one of the earliest modern examples of this phenomenon, see Colors magazine, established by Bennetton in 1991 and still going strong.)

As advertising, "Go Forth" has its problems. As brand storytelling, there are even more difficulties.

Bob Garfield, the former Ad Age critic, trashed "Go Forth" when it debuted a year ago ("Levi's Target Unlikely to 'Go Forth' and Buy Its Jeans") for being "too cleverly manufactured, too pompous, too precious. In short, too advertisingy." I agree without reservation.

Now, a year further down the road, it's clear that Weiden+Kennedy's campaign has not been well thought out as content marketing and has some serious strategic problems. Among those problems is a plethora of tags or tag-sounding phrases: "Go Forth!" "We are all workers!" "I am the new American pioneer." "There's a lot of work to be done. And undone." And so on.

It's also apparent that the brand and the agency failed to vet their strategy with anyone sensitive to the decline of rustbelt America or Levi's position with American workers. The campaign has stirred up debate online about Levi's lack of US factories, the American jobs it axed as it sent its manufacturing overseas and the ways it treats it foreign workers. Look here and here for examples.

The story the campaign is trying to tell is both too general (Go forth where? To do what?) and too narrow (Braddock, PA? Why is a global brand only concerned with one Pennsylvania town?). The connection to the brand varies from loose to non-existent, which makes one feel we are back in the 1950s with the real content being "brought to you by" Levi's instead of living a 21st century story where Levi's is a natural and integral part of the narrative.

In short, there are too many disconnects. They haven't figured out how to integrate content and brand or think it through strategically. But they're trying.

At the core, we have a feisty brand struggling to remake itself that has associated its struggle with a town trying to remake itself. This is a good thing, not a bad one, in my opinion. They also have given a nod to media integration--telling different parts of their story from the web to billboards to point-of-sale--playing out the Braddock connection in their outdoor and, most effectively, in their stores, where strikingly stylized photos of the town cover the walls and there is a very effective handout explaining what the Braddock stuff is all about. And they're bringing more attention to Braddock and the painful impact of the steel's industry's decline, which also is a good thing.

It's interesting to contrast this engaging and novel development in media--a jeans brand building sales by reporting on urban affairs--with Weiden+Kennedy's efforts for Old Spice. The Old Spice work attracted a flash of mass attention, but once the massive spending was turned off, all the attention dissipated instantly leaving no residual effect. That's because the entire Old Spice effort--even the smart idea of having the actor simulate social media conversations on video--was really nothing more than well executed traditional TV ads. And the hallmark of a TV ad is that it only works as long as you pour cash into it.

The point of brand storytelling--content marketing--on the other hand, is to build media assets that will be around long after the spending ends. If Levi's had constructed its current foray into content marketing better, the residual effects would be much greater. But even their flawed effort will keep paying off over time. The whole point, after all, is to cut way back on spending for increasingly questionable and expensive TV time and, instead, create valuable, engaging media that people will love and share. As we tell all our clients, great stories will spread.