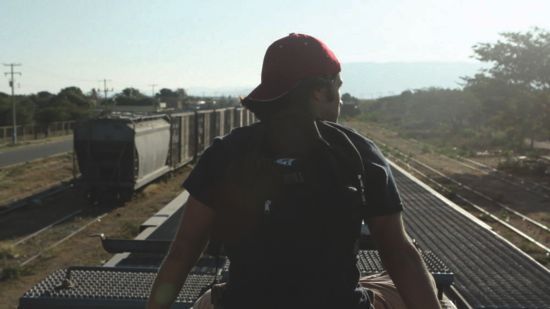 Gael García Bernal leads the journey to discover just 'Who Is Dayani Cristal?'

"The journey towards you, Lord, is life. To set off... is to die a little. To arrive is never to arrive until one is at rest with you. You, Lord, experienced migration. You brought it upon all men who know what it is to live who seek safe passage to the gates of heaven. You drove Abraham from his land, father of all believers. You shall remember the paths leading to you, the prophets and the apostles. You yourself became a migrant from heaven to earth." -- from 'The Migrant's Prayer'

August 2010, in the Arizona desert close to the Mexican border, a lifeless body is found, with only a prayer in his pocket. On the man's chest the words 'Dayani Cristal' are tattooed in black ink but he's clearly miles from home and unidentifiable. Yet, as someone at the local sheriff's office says "in life he was considered invisible; in death he's considered a mystery to be solved" and so the journey to discover just who is this John Doe, and the film Who Is Dayani Cristal? by Marc Silver and Gael García Bernal begin.

Filmmaker Marc Silver calls himself a 'social impact strategist' and when I met recently, at the Abu Dhabi Film Festival where his poignant documentary Who Is Dayani Cristal? screened, I asked for an explanation. Silver's background is in "late night low budget mini DV documentary filmmaking" he explains, and he'd always been interested in "human rights related, social change topics." Particularly anything relating to the "relationship between small micro human stories and how they connect with huge systemic economic complexes" continuing, "which we're incapable of solving through one documentary but we can certainly seduce and inspire audiences to explore further."

And inspire audiences further is exactly what Who Is Dayani Cristal? does. It asks important questions about migration, the need for cheap labor in today's consumeristic world and the impossibly high human price of that low cost. It also points a cinematically provocative finger at all the walls that are being built around the world, when just about 25 years ago there were global celebrations at the fall of the Berlin Wall, hailing it as one of the most positive achievements of the century.

Yet today, we're back to our weapons of mass separation which don't only come in the form of walls, but turn oceans, mountains, borders, passports and religious or political differences into barriers. It has become an 'Us against Them' world, 'Them' meaning anyone who is different: different social standing, conflicting nationality, other language, opposite side of the wall. Time and time again, these differences prove lethal for those who belong to 'the other team' as one of the migrants calls it in Dayani Cristal. United by their 'otherness', Mexicans, Hondurans, Bolivians, Nicaraguans all share one struggle, one excruciating journey together, joined by their common goal to make a better life for themselves and their families. 'Them' never seemed so much like 'Us' as in Silver's film.

Silver shares a haunting image "someone said to me in Arizona that when they look out into the desert it's a beautiful place but it's a graveyard for lost souls." And similarly, the Mediterranean has now become the same graveyard for those lost souls who try to reach Europe from North Africa and the turmoil of some countries in the Middle East, in search of a better life. There isn't a week that goes by when we don't hear of a boat capsizing and people drowning. And it's the same "between Australia and Indonesia" Silver aptly points out.

Who Is Dayani Cristal? was born out of a website launched by Silver and his collaborators "five or six years ago" where they asked people to "send in stories of resistance against economic division and barriers between rich and poor." This was before any of the 'Occupy' movements around the globe, which Silver admits "in hindsight, I can see we were onto something, realizing that was a fertile space to be in the right place." Many sent in their stories but, Silver continues, "the one that resonated most with us at the time was this story about the discovery of skulls and skeletons in the desert of Arizona." There was an important feel to that idea, because, Silver explains, "whilst we were aware that the story was local to the US Mexico border, it resonates and inspires much bigger questions -- the story may be specific to that region but the issue is global."

The film is co-produced by Mexican actor and director Gael García Bernal, who took up the role of the mystery man, recreating his journey from Honduras to the United States. In the words of Silver, who met Bernal "around the time we launched the website," he wanted Bernal to "follow in the footsteps of this guy and travel south to north," the opposite of the narrative strand of the film which instead goes north to south, bringing his body home. Together, Silver and Bernal also worked on 'The Invisibles', a series of short films for Amnesty International, highlighting the chains and shelter networks and the human rights abuses which are part of all migrants' journeys. The themes and images of those films are in Dayani Cristal and vice-versa. Bernal takes us on an unmissable real-life journey. He touchingly adds to the reality of the struggle, to the inhumanity of our expectation for cheap, at the cost of what should be the most expensive commodities, human lives, but also adding heft to the resistance. Yet we are often reminded of the part he is playing, because we know that he won't fall from that moving train and that he won't really die in the Arizona desert, as a lot do during the journey. Bernal is visible, he seems human to our media-fed reality, he is one of 'Us' not 'Them'...

Who Is Dayani Cristal? left me feeling deeply sad, but also helped me to understand the word 'lucky' which has been thrown at me a lot, lately. I am lucky, to have the passport I carry with me, to be born of those parents who provided for me, to be among the haves, with a cushy job that allows me to watch films and meet inspiring people like Marc Silver for a living. But I also always carry a responsibility with me, to resist, to help, to spread the word, to inspire. We all do. And we can start by watching Who Is Dayani Cristal? to begin that journey which will, one day, help change the world, and maybe make all borders just like the one separating Mexico from Guatemala. You'll see what I mean, once you catch the film...

Who Is Dayani Cristal? screens next at the Montreal International Documentary Festival on November 23rd and 24th, with Gael García Bernal in attendance. Watch a teaser below, the 'Altar Scene' from the film.