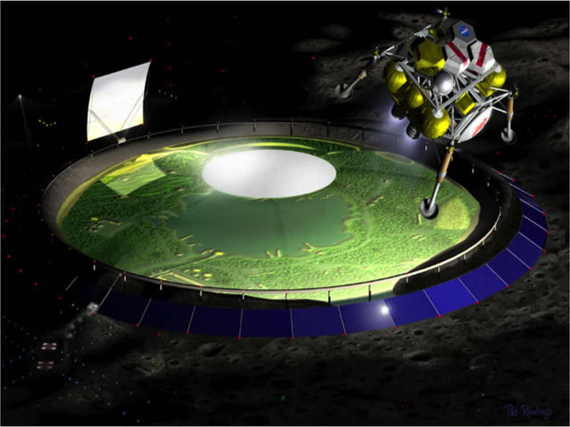 So there I was a couple of weeks ago watching the State of the Union, counting how many applause-sit-applause repetitions the members of Congress were going to fit into their annual joint exercise routine, studying the faces of Joe Biden and John Boehner to see who would smirk at what line, when the president said we were going to go into space not just to explore...

I nearly choked on my almond milk. I had to rewind and play it back. And yup, there it was. He said it. Then the president waved at astronaut Scott Kelly and spoke of his coming one-year mission to ISS as prep for us going to Mars. By this time I had put down my organic peanut butter cookie and was pacing the floor. Barack Obama had just said we were going to space to Stay, and then amplified the statement with an invited guest to symbolize his commitment.

There is a lot here to discuss, including the many mistakes made to date. But that would be a waste of time. Instead I am going to focus on the word he used: He said Stay. He said we would be going into space to Stay.

Now that can mean many things. We are so far Staying at the space station. We are Staying in Antarctica. Heck, we are Staying in Afghanistan and Iraq. (OK, we left Iraq and now we're back ... to stay? Never mind.) To Stay in terms of a frontier can mean anything from a lab to an outpost to a base, to a settlement -- for forever or just until it is redefined by the next president.

Again, I am going to skip over those discussions and simply declare that when he says Stay to me it means we are going to go into space to develop it, to settle, to create communities and to expand the domain of humanity and life.

And you will be right on both counts. Left to its own it will never happen. And even if it did it would be old school, simply some small overpriced facility with no utility and so many rationales for being that it has no rationale at all, stuck like a flag out there on the moon, on Mars, or floating out in free space at the edge of our reach and in constant jeopardy of cancellation.

Yet there it is. The president of the richest, most powerful nation in the history of the species (for now) has said he wants us to go out into space to Stay. Whatever that means to him and his government right now, I, and hope you as well, will work to make sure that it translates into much more than a phrase, a gesture or a dead-end techno-binge. We who get it must take his words and translate them into actions, the right actions.

First comes the definition. The president handed us what we need: an undefined phrase. My vote is that we define it to mean that to Stay means we go as pioneers, to explore, develop and settle the frontier as a new home for humanity.

Now we have to make sure it happens the right way.

And what is the right way? Well, the wrong way is taking the beach of space and planting a flag or a tiny outpost with a flag on top. The only right way that is inspiring and worth the effort is to enable the establishment of growing communities at the places we go that can then begin to capitalize on our investment, economically and scientifically, providing new knowledge and technology and offering hope and a new life to those who want to go there.

The wrong way would be to pour billions of dollars into a single Apollo-style program, forcing all solutions and approaches into one program, or betting on one team, agency or company. Instead, the right way is to create and define the needs driven by this overarching goal then let the different communities in our field provide the answers, technologies and products needed to achieve that goal based on what they do best.

The right way is to get behind those who already know how to make it happen, be it as part of our space legacy or using new innovations, and get them to work together rather than fearing or fighting with us over who does what, when, where and first. Space is big. The whole point of the frontier is that we go there to do new things in new places. Not one place, and not one thing, but all of the above.

In fact, all I expect is that this new declaration and agreement creates an opening that will allow a transition from a 20th century single-player space program to the opening of the frontier -- which includes both the government and private sector and results in the expansion of the U.S. economy here on Earth.

Of course then there's Congress. Given the way things are perhaps Obama should have said he will oppose going to space to stay -- and then they would have fully endorsed it. As it is, I want Congress to finally get that it helps their districts more to be places that are contributing to a larger, national cause -- and reaping the economic benefit endlessly into the future. We need the right budgets and the right laws to support all of us as we do the job.

The rest is up to us. And we cannot blow it as we have done so many times before. From John Kennedy to Ronald Reagan and George W. Bush, presidents have rhetorically opened the door to the frontier for us, and each time we have turned away to fight over destinations, technologies and timing.

Imagine looking up and seeing a ring of little pearls in the sky that are human habitats, or knowing there are trees growing on the Moon and the first human babies are being born on Mars who will call it their Home. That's what it really means to stay. And the president said it said it. So let's do it. Let's come together for once and say that if you want to Stay, here is the way.