It was a few days after my wedding. I was supposed to be honeymooning at a nearby winery with my newly minted husband, celebrating our unlikely marriage at age 55.

Instead, I was sitting on the railroad tracks in the pouring rain. Along with 20 other brave souls, some weeping, some singing, I was facing down a locomotive in a town -- Vancouver, Washington -- that many fear will be forced to accept the largest oil-by-rail terminal in the country. 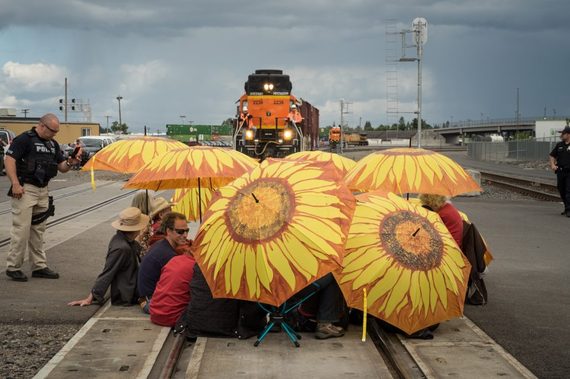 Because a few short days before, we'd watched in horror as a mile-long train filled with Bakken crude derailed in Mosier, Oregon and burst into towering flames.

We call these oil trains "bomb trains" because we know, with one tiny loose bolt, they can erupt into an inferno, scorching everything for miles. It happened in Lac-Megantic, Canada in 2013. Forty-seven people were killed in a matter of minutes, the town leveled when a train's brakes failed.

In the aftermath of the Mosier derailment, local fire chief Jim Appleton, who was originally unwilling to condemn oil trains, was beginning to sound more and more like one of us: "I think it's insane" to ship oil by rail, he told a reporter. "Shareholder value doesn't outweigh the lives and happiness of our community."

And yet shareholder value is outweighing the lives and happiness of communities all over the world. I live in the "blast zone" less than a mile from tracks that ply this dangerous cargo here in the Pacific Northwest. And millions of people, most of them on the other side of the world, are already feeling the heat.

Meanwhile, ExxonMobil, whose scientists knew as early as the 1960s that catastrophic climate change would ensue if they didn't change course, has invested in climate denial in order to maximize their shareholder value, counting on us to not connect the dots.

I grew up in India. I can see the faces of friends and loved ones on Facebook enduring record heat and flooding there. So if the trains wouldn't stop coming, I figured, I'd put my body on the line in Vancouver. If I went to jail, I hoped my husband would forgive me for skipping out on our first big date as newlyweds.

The riot police were beginning to gather, and the railroad's private police were issuing their warnings while hundreds chanted nearby. Not wanting to lose valuables in jail, I gave my wallet, cell phone, and wedding ring to a friend.

Then they hauled us off, one by one, in plastic handcuffs like tiny angel's wings behind each protestor's back. They put the 13 women -- as young as 21 and as old as 85 -- in one cell and the eight men in the other.

Seven hours later, as we were released from our windowless cage into the beautiful summer evening, I felt an unspeakable gratitude to my cellmates and those who awaited us outside.

Should we go to trial, many of us will be arguing we did this out of necessity, in order to prevent a far greater looming evil -- of being incinerated in our sleep, of doing nothing to stop this deadly fossil fuel cargo while hundreds of thousands of people die each year from floods, disease, malnutrition, and heat stress due to climate change.

Call me crazy, but we might just win this one. And in so doing, we'll send a very strong message to the oil companies that threaten us all that they must end this madness.