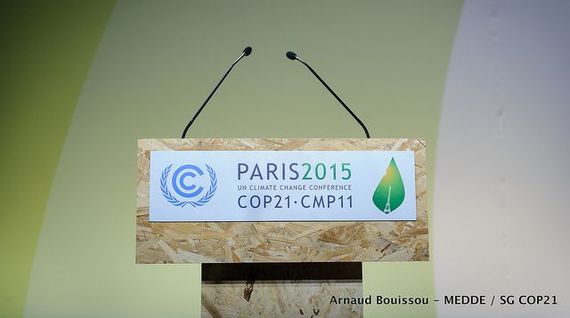 I was at the Kyoto climate talks in 1997. I remember doing the calculations, going through the proposals long into the night. I remember the moment of: "We did it. We have an international, legally binding agreement." I remember the euphoria.

But I also remember what happened after that. As the years passed after Kyoto I saw that the reality of implementation was far from what we had envisaged. As a scientist in the field I took part in many government discussions, and I grew frustrated at the inability of institutions and governments to comply with the agreements.

These failures do not mean that Paris will just be the next in a string of ineffective climate talks. A global, UN-level agreement on climate change is necessary, and I believe Paris will deliver it. But I do not see it as providing more than a direction. Yes, we will have an agreement, but our unrelenting focus from Paris onward must be on how to implement it. And that will require a major change in our way of thinking.

Policymakers, climate scientists and society as a whole, must abandon the idea of climate change as a single, discrete issue, to be dealt with using "climate policy." We cannot think about the future without thinking about climate change. On the other hand, we cannot deal with climate change without considering the future social and economic context. Ultimately, if we do not make climate adaptation and mitigation part of the mainstream development agenda, we will fail again.

Take the Green Climate Fund. An excellent initiative agreed at the 2009 Copenhagen climate talks, it assists developing countries in climate change adaptation. But it is designated as "climate change" money. Let's say a dike in Bangladesh is being extended, will we advise that only 25 cm of the 40 cm extension be covered by the climate fund because technically that is all that is needed for climate change, and the rest is just "general development"?

Frankly, we shouldn't care. We shouldn't spend time or money on such questions. We need an institutional and financial framework within which we are able to say yes, there is a climate objective, but there is also a development objective, and a security objective, together these make up a whole, and we will invest in infrastructure accordingly.

To ensure that climate change adaptation and mitigation become integral to development, governance also must change. Future strategy cannot consist only of centralized agencies issuing endless targets. Municipalities and small regions have an important part to play. Local efforts will also be more likely to engage people, because they are closer to personal experiences. In fact, while we scientists and politicians talk in dusty rooms, younger generations are already exploring new, bottom-up solutions, such as crowd-funding and joint ownership.

Investment from the private sector is also key. In the Earth Statement, written by an alliance of 17 global-change scientists, including myself, we state that:

We must unleash a wave of climate innovation for the global good, and enable universal access to the solutions we already have.

The good news is that at this moment, making the transition to a decarbonized world is still a major opportunity. We can leave behind the idea that we must put aside money to protect our economy against the threat of climate change. Investing in these global transitions can actually be hugely beneficial, both economically and socially. Changing the fundamental narrative of climate change from threat to an opportunity will trigger major innovations and transitions to sustainable economic development.

Climate science must change too. We already know the basic facts. We know that to have at least a 66% chance of keeping the temperature increase below 2°C, our greenhouse gas emissions should drop by 40-70 % between 2010 and 2050.

The next report from the Intergovernmental Panel on Climate Change, and climate research in general, now needs to get at the real issue: implementation. How do we achieve our goals in the institutional, social, and economic context? That is where the main focus should be.

Achieving a stable, sustainable future is possible. If it wasn't, I would be doing something else with my life. I am convinced that the Paris talks will result in an important, international agreement; but the real solution lies beyond Paris, and beyond the UN altogether. It lies in integrating climate into all development and funding decisions, in giving entrepreneurs and local municipalities the space they need to innovate, and encouraging private investment into climate-friendly development. It is a great opportunity for humanity.

Professor Pavel Kabat has worked in the field of global change since the early 1980s. Director general and CEO of the International Institute of Applied Systems Analysis, and member of the Earth League, he was also a lead author and review editor for the assessment reports of the Intergovernmental Panel on Climate Change.