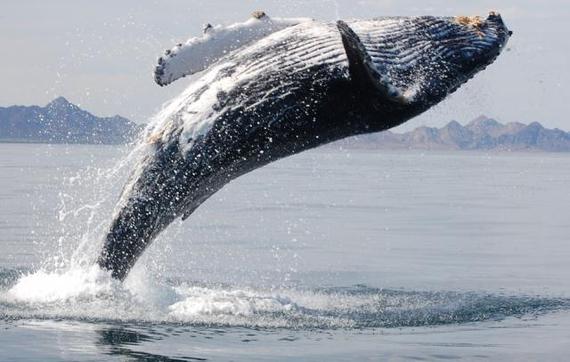 On Valentine's Day, 2011, while studying the movement and complex behavior of whales in the Sea of Cortez, Michael Fishbach, co-director of the Great Whale Conservancy, chanced upon a heartbreaking scene: a humpback whale that appeared to be dead and motionless, and probably just about to sink.

However, as Michael and his tiny crew brought their boat closer to the almost dead whale, it exhaled forcefully as if giving them a sign -- "I am still not gone and I need your help badly." Michael put on his snorkeling gear and jumped into the sea to asses the situation. He quickly discovered that the whale was horribly entangled in a gill net that was used by local fishermen.

"As I swam around the animal, our eyes met. There were no words that we could share but I wanted the whale to know that we were there to help. The sight of this beautiful creature trapped and so close to death was almost overwhelming," narrated Michael.

Michael and his crew had only one small knife but after a Herculean effort were able to free one of the whale's pectoral fin, and eventually the second pectoral and the powerful tail fin as well. A grueling hour later, the whale was completely free from its gill net contraption. There was jubilation and exhilaration onboard the boat as the whale swam away to freedom.

But the celebrations had just begun. It was now the whale's turn to host a thanksgiving party for Michael and his tiny crew. For the next one hour, the majestic animal put on a magnificent display of at least 40 breaches, tail lobs, tail slaps and pectoral fin slaps, as if expressing gratitude to her rescuers and dancing in delight for tasting freedom again.

The entire episode was caught on tape and Saving Valentina went viral on social media. I was among the millions around the world who watched the clip and shed a tear at the whale's freedom. But I wanted to do more than that. I wanted to peek into Michael's heart and know what was going on in it when he jumped into the sea. Why did he take such a big risk? After all, one panic tail splash by the whale would have meant, the story would have had a sad ending for both Michael and the whale.

So I reached out to Michael for an "open-heart" session that would allow everybody to know the true story of Valentina, the humpback whale and many other whales for whom Michael was the knight in shining armor in such desperate situations.

"I was devastated to see the beautiful animal trapped like that. I wanted to help save her life and when I did so, I felt a bit like a dad saving his kid. My emotions were that of devastation, sadness, hopelessness and then anger followed by being jolted into action," said Michael. 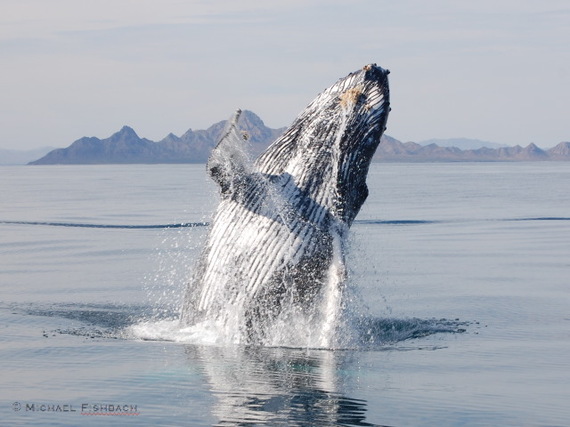 Would he jump in again if he found another whale in a situation like that? What about the thousands of whales who don't have him around when they need him in moments like this?

"It is far safer to attempt disentanglement with a knife attached to a long pole and from aboard the boat you are on," he said. "But yes, I'd jump in again if it were necessary and if I felt it was safe to do so. However, these fishermen and the drift nets used by them must be held to the same level of responsibility as the shippers and their ships need to be held to. "

Shippers and their ships? That's right.

"Many whales get caught either in nets or in ship propellers and perish in a horrible manner. This must stop. The world must understand and admit that the great whales are some of the most astounding and intelligent life forms our planet has ever known. We must curb our ignorance and greed and give these animals a fair chance at life in a healthy ocean that is their home," said Michael.

Michael's passionate plea is based on scientific facts and established trends. The Northeast Pacific group of whales, in the Sea of Cortez where Michael jumped in, is one of the world's largest sub-populations of blue whales. These whales transit the California Bight every summer, south of Point Conception. An area, which also happens to be one of the world's busiest shipping lanes with over 6,000 ships transiting the Santa Barbara Channel to and from the ports of Los Angeles and Long Beach every year. 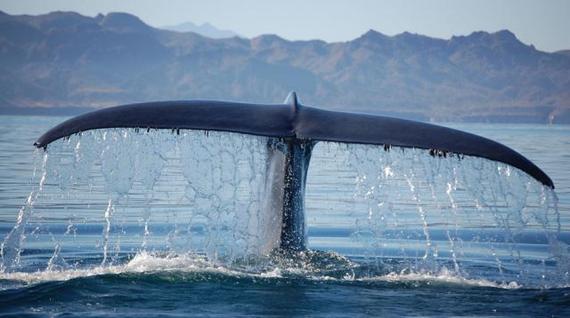 And due to the criss-crossing of the paths of the whales and the tankers, the whales are extremely vulnerable to collisions with cargo ships, cruise ships and other vessels while they feed on krill, or are just transiting or resting.

The crustacean krill descends deep down into the water during daytime and since it is photosensitive, it resurfaces again when it is dark. This draws the whales up to dark surface waters during evening and night time and often they are not fast enough to avoid the large ships heading their way.

"The blue whales from the Northeast Pacific group number somewhere around 2000 individuals. It is believed to be the largest sub-population left on earth. However, the busy shipping lanes affect the very existence of these blue whales. When feeding, as they are off the California coast from June to October, the Blue Whales are oblivious of these ships. They go about their business of gorging themselves and so often fall prey to the massive ships via collision," said Michael.

Louie Psihoyos, director of the Academy award-winning documentary The Cove and the founding board member of the Great Whale Conservancy, said if the shipping lanes could be moved then the whales could be easily saved. It would only cost a few pennies for each gallon of oil, smartphone or commodities being transported on our oceans, says Psihoyos.

Once a whale is slashed by the huge propellers of gigantic ships, it either dies immediately due to the scale of its injuries or is badly mutilated. The Great Whale Conservancy estimates that as many as five blue whales are killed by ships every year, and many more deaths likely go unrecorded.

"The statistics are sketchy. The reason is blue whales are negatively buoyant and sink when they die. Therefore, we will never know how many actually perished. But we do have clear data on the near misses which are way too numerous. We find a carcass with clear signs of a ship strike here and there and think that perhaps 20 or more whales die for each carcass that we find," added Michael.

However, despite their mammothic size, California's blue whales mostly remain unseen, which also explains why they primarily remain unprotected. But is there anything that could be done to protect these whales from the onslaught of ships and commercial fishing nets?

Michael thinks enough is not being done for the whales and the civic society needs to come together on this. Take for instance the North Atlantic Right whales. Their survival hangs by a thread as there are just 300 of them left worldwide. And that is after 60 years of 'protected status' and the knowledge that one-third of the known annual casualties result from ship strikes.

So what's the need of the hour for the whales? And on whom does the onus of responsibility lie? We can blame the comets for the dinosaurs but for the whales, we might just have to put that against mankind's name, as for many other species?

"The hour is here and strong. The whales are calling out for our help. They are living on the precipice of extinction and the challenges can be summed up in two words. Bureaucracy and economics. Maybe with greed thrown in," added Michael.

Michael's jump into the Sea of Cortez to save Valentina was not just only due to a love affair he had with the whales. It was symbolic of his frustration at the current situation that these majestic animals face, his way of appealing to all of us to do our bit and speak up for the whales to our appropriate agencies and governments.

You've got my vote, Michael and I am sure many more will join you as well. After all, it's about time the whales enjoyed the oceans freely and are able to have a 'whale of a time' themselves. 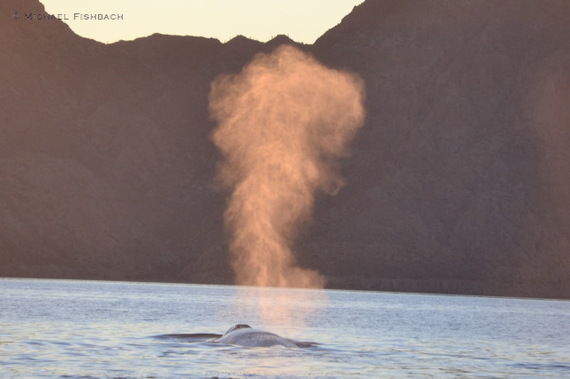