Last month, I read an article on The Huffington Post entitled, "To The Woman and Child Who Sat at Table 9." The post was about a restaurant manager's experience in dealing with a customer, following complaints from other patrons about the noise her child was making. Her child has autism. I loved the piece and promptly shared it on Facebook. As you discovered, I have a son with autism, and it's not always easy. I sympathized with the woman in the post and was pleased that someone had stood up for her.

In the last 11 years, my family has blazed an interesting and colorful trail through the restaurant world. My son with autism, Bear, has misbehaved. He's been rude. He's been loud (very loud). He's disappeared from the table, prompting small-scale manhunts. He's eaten off of the plates of strangers. The list goes on and on. He's 13 now, growing up, and for the most part we dine out with little or no trouble.

Then a few weekends ago we had an incident. I was dining with my four kids at your restaurant. We'd never eaten there before -- we were visiting from out of state. I'm sure you must remember us, but it was a bit crazy that night. It was a Friday, Valentine's Day to be specific, about 6:00 p.m. When we got there it was starting to get crowded, but we were lucky enough to get seated after only 15 minutes. By the time we left, though, the restaurant was packed and very loud, so I understand if you don't remember.

I will never forget you. I wanted to thank you and our server for the kindness you both showed our family. I'm embarrassed that I didn't get either of your names. Please forgive me, because I was rather frazzled.

We'd been traveling all day and the kids were tired and hungry. Given how many people were waiting for a table and the crazy traffic we'd experienced, I just wanted to get in and out fast. When the server arrived at the table, I had our whole order ready to go -- drinks, appetizer and meals.

While waiting for our drinks, I noticed that Bear was playing with his mouth and moaning a bit. His brother remarked that he'd been doing that in the car and maybe he had a loose tooth. The moans got more intense, but it was so loud in the restaurant that no one noticed. I quickly got him to the ladies' room to see what was going on inside his mouth. His brother was right: Bear had a loose tooth. He kept pulling on it, which was making it bleed. Before I could get a wet paper towel in his mouth, he managed to extract the tooth and hand it to me. Now it was really bleeding and he was crying. Loudly. And I began to panic.

I cleaned him up and calmed him down and we returned to the table. I kept telling myself it was going to be all right, but it went from bad to worse pretty quickly -- my son was becoming hysterical. You saw me looking around the restaurant with what I assume was a panicked expression. The restaurant had become really crowded. Then you were at my table, asking me what was wrong. I needed to get my son a Coke. In no time, you and the server were standing there with Cokes. By now Bear had real tears, big fat ones, splashing onto the screen of my phone, as his cries escalated to wails.

It was time to abandon ship. I gave my daughter my credit card and told her to pay the bill. I took Bear's hand, to lead him outside. He started screaming, probably because he realized he was losing his chance for dinner. You tried to stop me, but I had to get him outside.

Outside things didn't improve. The crowd of waiting diners had expanded to the sidewalk. I should also apologize to them, or thank them, because Bear was flipping out and they mercifully didn't try to intervene. I banged on the window to get my other kids' attention, with no luck. They were probably ignoring me, although the couple sitting right by the window certainly wasn't. Awkward. Sorry for that. I went back inside to tell the server to just run my card. We needed to get out of there.

The server handed me my credit card and explained that her manager was going to take care of it. That stopped me in my tracks. Suddenly, I was the woman at Table 9. I don't know why, but I felt funny about you comping my meal. This is my life and I know it looks scary, but I can handle it. I told her that she didn't have to do that. You must have seen us talking, because you approached and told me not to worry, you were going to box up our meals. I'm sorry I didn't let you do that, but I could hear the screams outside (by this time, Bear's siblings were with him). We couldn't wait and honestly, we were probably terrorizing the other patrons. I hope you understand. I really did want to pay my bill, but you insisted that you were going to take care of it.

I feel like I didn't do enough to convey my gratitude, so I'm trying to do so now. This was a learning experience for me. I've worn this T-shirt for so long, I'm oblivious to the stares (and occasional glares) of others. I adored and appreciated the story when there was a different heroine who benefitted from the compassion of some other manger, but I was reluctant to play the role myself. I just wanted out of that particular scene. I wish I had accepted your grace, rather than running away with my tail between my legs. Kindness is all around, and you reminded me of that. 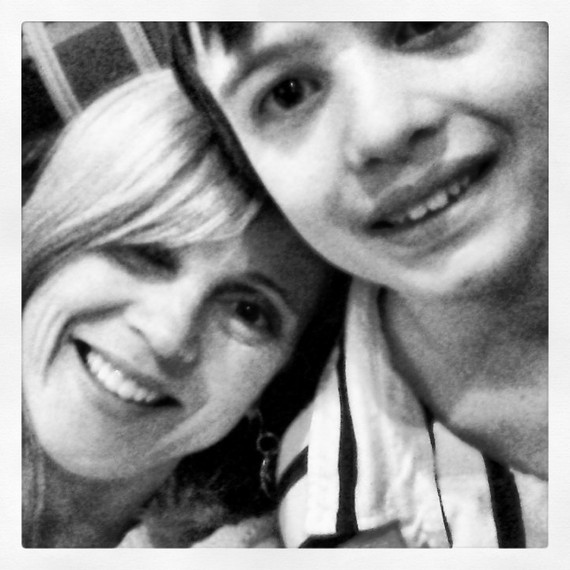 More:
special needs parentingParenting ParentsRestaurantsAutism
Newsletter Sign Up
Raise the kind of person you'd like to know
Subscribe to our parenting newsletter.
Successfully Subscribed!
Realness delivered to your inbox