I bet you woke up with a list of things you needed to do today.

You knew it was ambitious. You had appointments to schedule and bills to pay and yes, the bathrooms will get cleaned today! And sure, it will be hard, but dammit, sometime in between unloading the dishwasher and changing the sheets (how often do people do that, anyway?) and emptying the recycling bin you WILL make that phone call to the insurance company that you've been needing to make for weeks.

And yes, you know you still have a dozen emails to respond to, but how is that going to happen when you have to make it to play group before noon?

But I'm guessing that maybe (just maybe) you struggled to get to the dishes first thing, like you meant to. Maybe a little hand reached for yours (which was reaching for those dishes), wanting for you to pick him up and hold him for a while. And then he needed a snack and a tickle and a diaper change. And so the dishes sat there a bit longer than planned because someone else needed you more.

And when you decided to do the laundry during her morning nap, 10 shirts into folding, you heard a whimper, which turned into a cry. So, you went and straightened her blanket and rubbed her back and sang her a song. And the shirts remained in their unfinished pile because someone else needed you more.

And you got home from work and started to cook dinner (who has the time between homework and baths, anyway?). You'd saved a recipe from earlier in the week and you picked up the groceries on your lunch break and you were ready. But math homework was really hard that night and then the little one cut her finger and Mom, could you review these flash cards with me, after you get my sister a Band-Aid, please? And so you set aside your recipe and you kissed a Band-Aid and you called for a pizza and you sat down with the flash cards because someone else needed you more.

And on your way to his baseball game you were planning to make a few calls -- schedule a physical and that haircut that you keep putting off. But as you reached for your phone he looked up from the backseat just long enough to catch your eye in the mirror. And you could see that something was on his mind and so you pulled your hand back from your phone and you asked him what was up. And although he's often guarded now, he told you about the friend at school who had hurt his feelings at lunch. And you could see in his eyes the welling of tears. And so you listened and listened and then talked some yourself. And you never made those calls because someone else needed you more.

And sometime during the day, in the middle of the things that did and didn't happen, your breath caught in your throat (for an instant) as you watched your baby (no matter how old your "baby" might be, now) from across the room.

My breath caught, too.

He is the best thing you've ever seen. And when you look straight at him, he looks straight back.

We got it all done, you see. 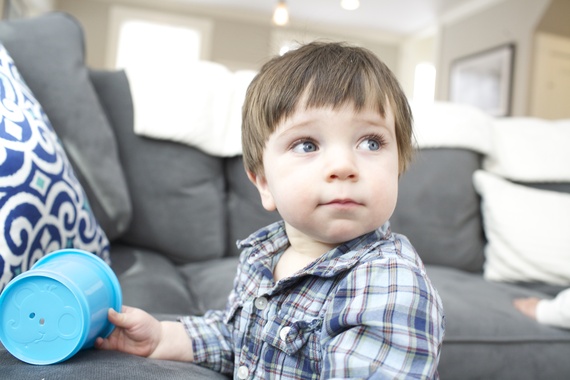 Love In One Photo
More:
Moments Not Milestonesparenting adviceMotherhoodParenting Parents