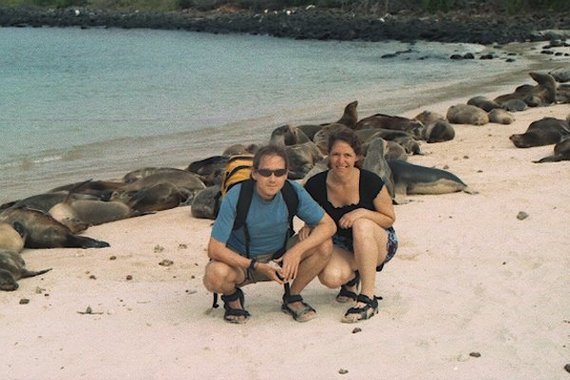 On March 31, 2014, two young men suddenly appeared in a dark alley in Pittsburgh. Their subsequent encounter with my partner, Allen, changed our lives forever.

Two days earlier, I had said goodbye to Allen for what was supposed to be a three-day trip. He was going to Pittsburgh with cellist Kate Dillingham for a performance of his musical composition, Three Fantasies for Cello and Piano. By all accounts, the performance was a wild success.

After a celebratory dinner, Allen suddenly collapsed. He was with friends who did not know CPR. Then, from out of nowhere came those two young men -- strangers -- who performed CPR. But for them, Allen would undoubtedly have died that night.

It turns out Pittsburgh is a pretty good place to have a massive heart attack.

The EMTs arrived in less than five minutes, and UMPC Shadyside, where Allen was taken, had state of the art facilities. A medical team of 15 doctors, nurses and technicians knew to immediately institute cooling procedures (which have been shown to significantly reduce mortality and brain damage after cardiac arrest).

The next day, I flew to Pittsburgh. Whatever I expected, it wasn't the sight of my life-partner in a coma, hooked up to a ventilator. When I arrived, I was met by two residents. One talked to me about brain stem death, the other spoke about a 60 percent chance of recovery. Their vastly different perspectives reflected the wide-ranging uncertainty regarding brain injuries following a cardiac arrest.

Plunged into the unfamiliar world of medical crisis, I had to make life or death medical decisions. Allen was a six or seven on the 15-point Glasgow coma scale -- the lower the score, the grimmer the prognosis.

My mom held my hand, and Allen's personal physicians talked me through the choices on the phone. Do we put in a feeding tube? Do a tracheostomy? Without those medical interventions, Allen would surely die. But, once in place, those life support interventions are very difficult to remove. Was I condemning him to a prolonged vegetative state?

Allen was in the ICU for three weeks. We played music constantly -- from the music he had written to the music he loved (except I played a lot of Brahms, not realizing until later that he despised Brahms). I read him poetry. We "watched" the Boston marathon. He occasionally opened his eyes, and sometimes seemed to cry or smile. But, he made no clearly volitional action. Despite repeated pleading, he never squeezed my hand, wiggled his toes, or followed anything with his eyes.

As soon as he was medically stable, we returned to New York. A month after his heart attack, he was still in a coma. Nevertheless, he began physical therapy. It took two aides and a Hoyer lift to bundle him into a chair. As we took him to the therapy room, his therapist began badgering him. "You want to walk again, don't you Mr Schulz? Do you want to walk? Tell me you want to walk."

And then, all of a sudden, he nodded, and whispered, "Yes."

I cried. The therapist cried. I texted our parents, his ICU nurses, and then posted to Facebook.

Even with a tracheostomy, Allen managed to force out words -- "I want to see my daughter. I need my daughter." She saw him later that day.

It has been a year since the day Allen collapsed -- and what a roller coaster of a year! Allen was in the hospital for seven months.

We lived through hallucinations, seizures, frustration and despair. Months of intensive rehab helped him regain the ability to stand, to dress and to feed himself. He came home in a wheelchair, needing nearly round the clock attention. Slowly, he grew stronger, and the wheelchair now sits, gathering dust.

His vision is still extremely poor, and he struggles with many daily tasks. But he is here with us. Our daughter has a loving and engaged father, I have my partner. His personality, and intelligence remain largely intact. We don't have our old life back, but what we have is pretty good. We walk our daughter to school, we have coffee with friends, we make plans for the future. Recovery is a long, slow process, but Allen continues to make progress. If I sometimes I still hear the ventilator songs in my head, it is a small price to pay.

Each year, over 350,000 Americans suffer an out-of-hospital cardiac arrest each year and the vast majority of them die. Bystander CPR can make the difference between life and death. Survival rates fall 7-10 percent every minute without CPR. Yet in the United States, only 32 percent of victims receive bystander CPR. Even for those lucky few the statistics are grim. Ten percent of cardiac arrest victims who receive CPR survive the year -- triple the survival rate for those who don't receive CPR. Survivors are often left facing debilitating brain injuries. Allen is clearly very lucky. He received CPR nearly immediately, and received superb medical care. That has made all the difference for us.

"Not Alone" is the slogan for the Brain Injury Association of America's ongoing awareness campaign. "Not alone" captures our feelings perfectly. We could never have gone through this alone.

We are so grateful to the doctors and nurses who gave Allen the care he needed, to the EMTs who got there so quickly, to the therapists who helped him to a hard-won independence, to our family and friends who helped us in every way imaginable, and of course, to those two anonymous strangers in the dark alley in Pittsburgh. I hope you read this and know how grateful we are.