It has been seven years since my last "first day of school," but I am struck by how viscerally I recall the sense of dread that would set-in around this time as a new school year approached.

I did not realize I was trans until long after high school, but I went through middle and high school with an unrelenting sense of discomfort -- with myself, with the world, with the idea of living inside my body. There were many days that I didn't believe I would find my way through that pain.

I am alive today, in part because, as I have explained before, during those years of self-doubt and confusion, my teachers, administrators and government representatives never sent me the message that I was so freakish and disgusting that I didn't deserve to share space with my peers.

But what about the trans students who begin a new school year as the subject of a national campaign to expel them from the spaces shared with their peers? How will they find their way through the rhetoric and attacks on the very core of their being?

In the past month alone, government officials have argued in litigation that:

* It is "outlandish" for the federal government to protect transgender students from discrimination.

* Prohibitions on sex discrimination are limited to an understanding of sex "based principally on male or female reproductive anatomy, and not one that includes self-proclaimed 'gender identity'."

* Having a gender that does not accord with the gender assigned to a person at birth is a "delusion".

*Providing insurance coverage for health care for gender transition would amount to "material cooperation with evil."

Behind the rhetoric, fear-mongering, and scare-quoting of trans identities are real human beings just trying to navigate the world. As ACLU Gavin Grimm explained to the school board that denied him the right to use the boys' restroom like the other boys at his school, "I am just a human. I am just a boy."

Gavin's fight has reached the United States Supreme Court and as his graduation approaches, Gavin is still barred from the boys' restroom. And like Gavin, thousands of students are beginning a new school year without access to the restrooms and locker rooms available to their peers. And thanks to a nationwide injunction entered in a federal court in Texas, the federal government's enforcement of Title IX's ban on sex discrimination in schools to protect these students has been put on hold. 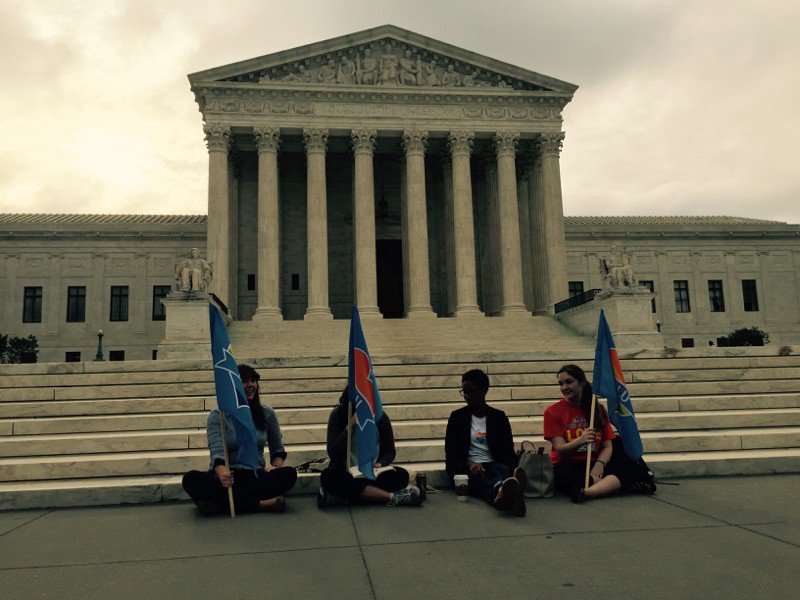 Supreme Court of the United States

As these questions about the scope of federal protections based on sex and the validity of anti-trans laws like North Carolina's HB2 make their way through the courts, we have to take care to protect and advocate for the many trans people who are receiving awful and destructive messages about their place in the world.

To the transgender students beginning a new school year, I hope you know that:

*You are beautiful and perfect just as you are.

*Your body is not a threat to anyone and your existence is a gift.

And to those who are afraid of us, who don't understand what it means to be trans, who are concerned that our bodies might make you or your child uncomfortable, I urge you to be gentle and thoughtful. This is not about people "choosing" a restroom but about people being who they are and simply going to the restroom like everyone else. Trans people are no more choosing which restrooms to use than they are choosing to have to go to the bathroom in the first instance.

And this is not a question of identity versus biology or of choice versus fact. This is about humanity and existence and survival and whether the government is going to recognize that humanity or deny it. And while these questions get sorted out, real trans people are still going to need to use the restroom and the locker room and walk down the street and get health care and survive.

No doubt we will ultimately win in court, though there may be some more losses along the way. But no matter what happens in the formal legal landscape, we have a lot of work to do to hold each other up and make sure that the nasty dismissal and demonization of our bodies doesn't decimate of our beautiful community.

The views above are my own and don't represent the position of the ACLU.