In Peru's Cerros de Amotape National Park, it seems even the toads dress up for Halloween.

This picture, captured by a ranger at the park, does not show a new species of 'bat toad,' as it first appears; rather, it's of a common cane toad that caught a bat. The photo was distributed by Phil Torres, a naturalist with an affinity for the jungle, on a blog for tourism company Rainforest Expeditions. 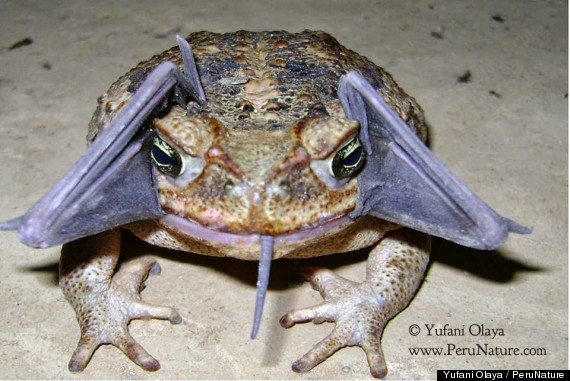 Breakfast of champions. If you can keep it down.

In the post, Torres notes the cane toad is a "notoriously opportunistic feeder," before conveying the odd set of circumstances wherein the pictured toad literally bit off more than it could chew.

Apparently the bat had been flying too close to the ground, when, the photographer says, "out of nowhere the bat just flew directly into the mouth of the toad, which almost seemed to be sitting with its mouth wide open."

After struggling with the meal for quite some time, the toad eventually gave up and spat the bat out. The bat recovered enough to fly off sometime later.

"We encounter a lot of bizarre things while working in the Peruvian rainforests, but this one is easily the [strangest] feeding interaction I've seen," Torres added in an email to The Huffington Post. "Since I first posted the image over the weekend, I've received messages from biologists who have also seen bats getting eaten in unusual ways -- one by a large frog in Costa Rica, and another by a woodpecker in Texas. ... These types of unexpected species interactions probably occur much more often than we think, it's just that we're not always lucky enough to have a camera alongside to capture the moment."

Bison Charges And Hurls Another Bison In Yellowstone Showdown