Long ago, someone very smart invented a truly brilliant breakfast trick. Instead of putting her egg on toast, this person chose to put the egg in it.

Laura In The Kitchen

The reason this move is so profound is because it cooks the egg and the bread simultaneously. It also shapes the egg, meaning the whites won't have the chance to run directionless all over the pan, resulting in a wonky breakfast. Even more, the cut-out section of the bread can be repurposed as a type of dipper. If you like to sop up runny eggs with toast, this second piece will perfect the sopping process.

There's no master method for whipping up this dish. Some like to cut the hole into a special shape, like a heart or a star, usually with the help of standard cookie cutters. Others prefer to cut an imperfect circle with a standard kitchen knife. Here's a really standard recipe from the blog Who's Hungry, if the delicacy is new to you.

What's most controversial about this egg-inside-a-piece-of-toast is not its deliciousness (objectively tasty,) or its cooking technique (do what you want), but its terminology. On Google Trends, "toad in a hole" defeats other popular names, like "egg in a basket" and "egg in a hole." This is somewhat surprising, considering the egg has nothing to do with an amphibian. 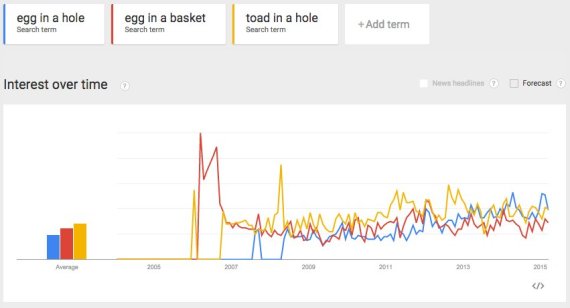 We asked our readers to share their favorite egg-in-toast nomenclature, and received a range of responses, varying from PC to a bit crass. Check out some of the choice names for this egg dish below, then tell us which lingo you tend to use to describe the glorious breakfast.