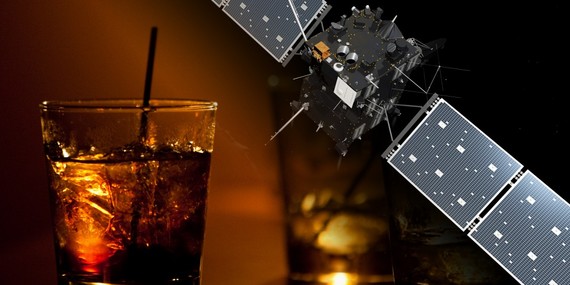 Space travel, even interplanetary space travel, has become so mundane we tend to forget what a risky, complicated exercise it is. The European Space Agency didn't let us forget this week when they successfully completed one of the trickiest maneuvers among all the tricky maneuvers mankind has accomplished thus far in space: Landing the Philae probe precisely on the uneven surface of comet 67P/Churyumov-Gerasimenko. It's akin to jumping off the Burj Khalifa tower in Dubai, in high winds, onto a moving skateboard (don't try that).

NASA scientist Claudia Alexander and her ESA counterparts experienced nail-biting moment after moment: Searching for a second eligible comet after deadline delays made the first inaccessible; putting the Rosetta spacecraft into a deep sleep for a third of its 10-year journey to conserve energy; suffering through a 45-minute delay in contact when Rosetta apparently kept hitting "snooze" on its four alarm clocks; landing Philae on an unknown surface (too rocky? too soft? bigger or smaller than Kim Kardashian's butt?); initially being unable to anchor it to the comet when it landed (fixed it). The results have been, so far, spectacular and open up incredible new avenues of research. "I really want people to understand that these things are difficult to do," Alexander told the Sydney Morning Herald in an interview. "If it happens, and we are all jumping up and down, it's because we really have that feeling like, how did this get pulled off?"

The team did get to jump up and down, and we think that's reason enough to raise a glass in Rosetta's honor. Space and booze have been making a lot of news recently: Ardbeg whisky launched a few molecules of whisky compounds into orbit for three years just to see how it might affect the aging process. And Grey Goose partnered with Virgin Galactic to be the vodka of choice if and when Virgin's plans of sending rich people into near-earth orbit materialize. So it's only fitting to find a way to tie it together. Someday we'll all be throwing back space beers on Mars.

Chill a Martini glass with ice cubes. In a mixing glass, add vodka, vermouth and raspberry eau de vie (replace with Frangelico if needed). Add ice and shake well. Toss the ice in the Martini glass and strain the drink into the glass. Squeeze lemon twist to get the oils over the drink and garnish with a bit of black pepper and raspberries.

Check out AskMen's past Toasts of the Week:

This article was written by Robert Haynes-Peterson for AskMen.